Name this widget: mouseover extends text that doesn't fit in its table cell

I'd swear this used to be a widespread feature, but now I can't find any evidence of it. A table cell contains information that is too wide for the column, so it is displayed in truncated form, and when the mouse is over the cell, a wide box appeared overlaying the table, similar to a tooltip but not a tooltip, to show more of the cell's content.

The thing that makes this fundamentally different from a tooltip is that the extendo-box (as I'm calling it until I hear a better name) would be positioned on top of the cell that it is giving information about, aligned so that the text you were able to see before is still in exactly the same position on the screen. You could just keep reading past the edge of the cell, instead of having to find your place again.

It's probably hard to understand from my description so here's a demo: http://jsfiddle.net/9z2xt/1/ ... try a mouseover on the table cells and watch how the text extends itself without moving.

I added one of these to a project under development, and although I replicated all the behavior I remember (as in the jsfiddle), it didn't turn out to be very helpful. I don't know what to do about alignment of the extended text when the cell is all the way on the right. I'm inclined to get rid of it. But the origin question is bothering me now.

Where did I get this idea from? Was it part of a common widget set like GTK, Qt, Motif? Is it still used in the current version of anything? Or did I really dream it up myself?

I finally spotted one in the wild, on a Windows box. It's in the Resource Monitor. 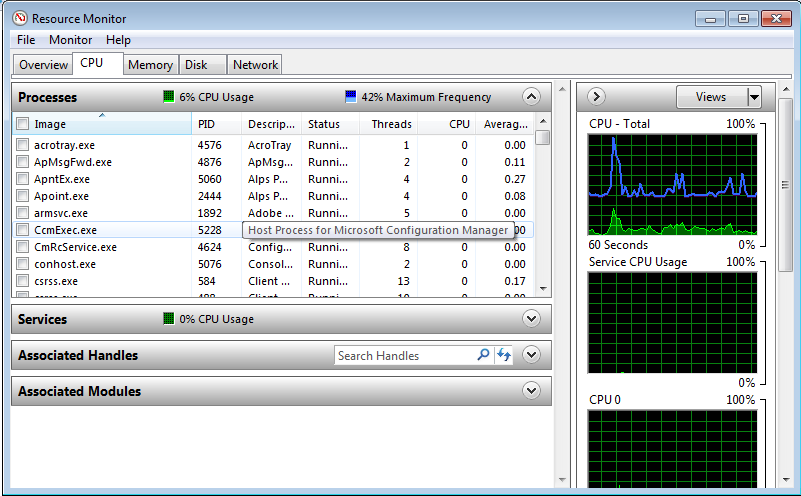 You're right, it seems very familiar to me, as well. The closest example I can think of is simply how Excel behaves when my data cells are too narrow or short to display all the content. The content is displayed in what is labeled as the formula bar at the top right directly above the spreadsheet work area.

I'd write Janko at Warpspeed to see if he's familiar. He wrote the ultimate guide to table design patterns - patterns commonly used to solve the problems we have using data tables.

I can't think of any table widgets off the top of my head that have that feature but I'm sure there are a few. Usually it's implemented by the application. I've implemented it in Java and Qt before just as tool-tips with explicit position, although if you wanted to go the extra mile you could certainly create a tool-tip-esque widget with a fancier look. It's usually a pretty trivial feature to add; for example, here is a discussion, along with about 15 lines of code, adding the feature to a QTableWidget in Qt.

The term that comes to mind for me is overflow, like the CSS property

I would say something like "cell overflow" or "overflow on hover"

2
What's the name of this pattern (submitting an entry which gets added to a table)?
2
What is the common name for this widget (vertical buttons/links)?