When is it a good idea to force a format in a text box for currency?

Is this a good idea to format a text box if it's only for currency? It makes sure the user does not enter unwanted characters, including the decimal character.

What I have now is this. For example, if the user wants to enter 50.25, it goes like this:

Is this user-friendly / intuitive enough?

If I understand correctly, they have to enter the digits one by one from left to right. This is bad interaction design for the following reasons:

The problem is the fixed decimal point. It means that however you start everything in between is a valid (and often strange) value. If people fill in the decimal point themselves, they can type the vakue that they have in their head however they like.

My preferred solution in these cases is to have a smart interpreter that can handle most inputs, and to give immediate feedback on how you're interpreting the value: 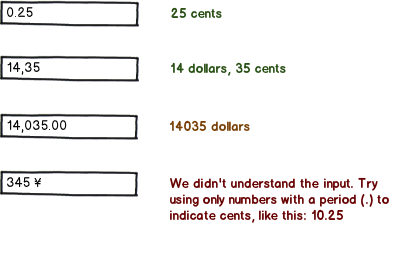 This also allows you to start simple: just force people to use a certain format and interpret it rigidly (and show them instructions), and enrich the interpreter if the field turns out to be important in the user's flow. You could even let it do currency conversion automatically.

I think this question speaks for itself. There will no added value when you implement formatting behaviour like this and it can break users flow.

The expected currency-formatted output of 50$ is basically when you type '50'. Let the users place the decimal separator where they want to - which is more natural and widely used solution to this kind of formatting.

currency input is a pain because everyone has different locales and expectations. (This is actually true for any kind of input). A solution I like (my liking this is not a good base for any usability standard) is the following setup:

Present 2 boxes with a decimal separator in between

Users can type in 50 in the first box, and they get $50. alternatively they can type in an additional 25 to get $50.25. Because the input is now simply reduced to entering two integer values, this is very easy for validators and javascript code to handle.

The point is users don't have to worry about currency symbols, decimal separators, and even if their locale is different (for example, use a comma instead of a dot or place the currency symbol after the amount) the users will still be able to understand what they are supposed to enter.

Not the answer you're looking for? Browse other questions tagged forms formatting textbox or ask your own question.

25
How to warn a user they are approaching the character limit for a text input field with a soft maximum?
12
What is the best way to ask for a specific amount?
14
Should a special slider value be implemented with a checkbox or not?
9
Not known - Yes - No Buttons
0
Three different types of input from a textbox
1
Textfield validation - persist, ignore, correct or delete?
5
How to enhance bilingual - auto suggest search box?
2
Mobile proof input control for long list of options with a lot of text
2
Autocomplete only specific words within a Freetext Box capturing a paragraph of text
11
Textbox with an unknown value