Has anyone done any studies or found any good research to see if a dark interface or a light interface is good for viewing outside on a mobile device? Does the color of the interface make a difference, or is it more about contrast?

I didn't do a formal study on a contrasting color scheme, the following is what I found over the course of a weekend.

During an app contest last year, I created a transit application which used black and white in hopes that it would be easier to see outdoors on a sunny day because of the contrast of colours. Here is a screen shot: 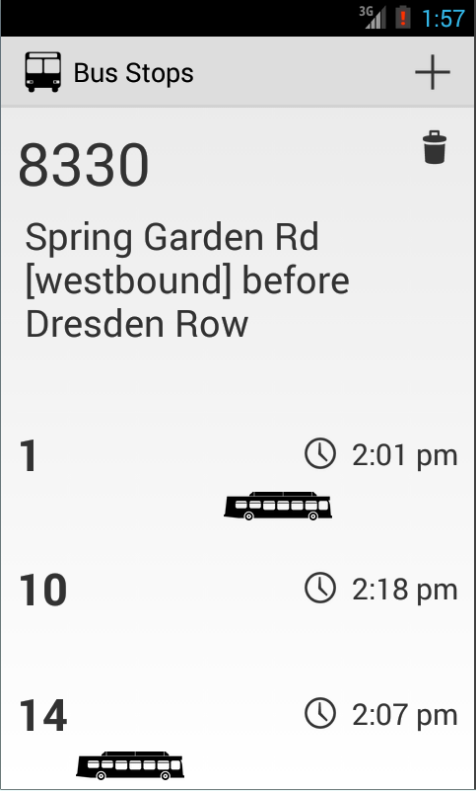 Since it was a competition, we didn't have much time to test, but we did simulate a sunny day by placing a phone directly under a light:

We found that text becomes obscured the easiest, but we could generally still make out the images; go for images/icons over text whenever you can (this would also help with localization down the road). In the case of our application, even if you couldn't make out the text at all, you would still have a decent idea of when the bus was coming based on the black blotch on the screen.

Some people had screen protectors on their phones. We found that these improved the readability of what was on the screen.

Not the answer you're looking for? Browse other questions tagged mobile light or ask your own question.

7
Any studies (or experience) regarding mobile device use and purchasing behavior?
6
What are the most important scientific papers about “Adaptive User Interface for mobile devices”?
17
What are the most adopted use cases for QR codes? Do alternatives or variations provide better user experience?
1
Mobile app considering ecology - is it possible to blend light green into calm scheme?
4
Ipad/Iphone designing in Full-Screen vs Non-Full-Screen?
8
Has user testing ever revealed that you have to change your app's UI colour?
2
Research/Data on mobile interactions vs. desktop forms?
0
UI colour palette for outdoor or bright lights
5
Is there any conclusive research about mobile user scrolling habits?
9
UI pattern to hint at important content outside of viewport