UI for system model vs. user model, for developers

Background: Product I'm working with caters to developers, and I'm redoing the UI to improve usability. Currently, the UI behaves like the system model, which is fairly complicated because its a relational database model. For example, in the UI you can create an application (MyApp), a directory (DIR), and accounts (Bob). Bob exists under DIR, and DIR exists under MyApp. However, DIR can also be associated with another app - MyApp2.

If you ask developers about common tasks, they would say sth like "i first create an application, then i create the directory, and then the accounts. Later, I would go into my application and see what accounts are in there." So their user model is application-centric, which has major implications in the UI because supporting this makes it appear inconsistent with the system. So you can imagine, if we have an app-centric UI, a user chooses an application and sees its associated directories and accounts. It implies that a directory exists under a single application (which is not the case, but may possibly be a common use case).

This is the current system model:

This is the user model:

Going to prefix this with i am a developer first and budding UX person second so some of the terminology may be off here. Putting this in an answer as it may be long, but any little helps i guess and may open up a debate.

Maybe we are complicating the user model with the user flow. The current system model is the true system setup because everything is shared across one global boundary (the apps, directories and users are not bound to each other exclusively) and refined in local boundaries (Users -> Directories -> Apps), so this in not really the context of the database structure it is just the flow of the application in my opinion.

I would not look to change the existing setup navigation wise, because like you said you will give the impression that the context has changed and the users and directories are now self contained within an application, which is not the case, and offering up directories/users that exist in different application spaces may confuse the process further and go against what you are trying to achieve as the existing system is already used.

Even if you think the current user model does not correlate exactly to how the application is setup, going for a drastic shift in sandboxing (in flow anyway) the applications, directories and users would do the opposite.

So, if you remove the focus of the navigation it then becomes a focus on core activities that may benefit from improved flow and your UX wizardry. For instance, does adding a user to a directory have an extra step that can be removed, does the current setup lead itself to duplication of directories and users across boundaries, can this be resolved with a more intuitive UX flow, i am clutching here as i don't know the app flow to offer anything real :) but hopefully it moves away from structure and more to experience at a feature level.

If the user is the account, then the account can be the top-level environment. In this case, you would get: 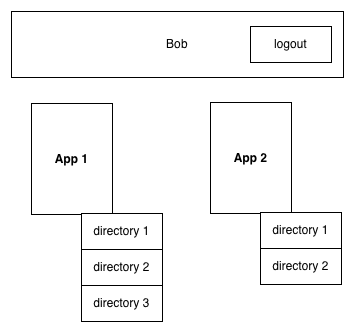 Form the user's perspective, the UI includes everything he/she can do when logged in.

If the user has multiple accounts, the UI can stay the same: 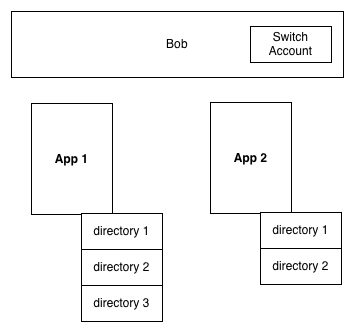 Not the answer you're looking for? Browse other questions tagged gui-design navigation user-behavior user-research user-centered-design or ask your own question.

8
Help user develop a mental model for version control system
1
Should users be able to navigate a relational Data Model?
5
How to convince client to categorize personal stuff in MyAccount
2
what kind of questions should i ask the user during the user interview to get insights for revamping website on-boarding?
1
Navigation too long, any real case solves this issue?
2
How can we design an experience for a distributed system which is asynchronous and inconsistent?
1
Displaying limit for selectable options
1
ERP system for staff admins - managing complex information tree