How best to show server availability over a 24 hour period?

I have a customer who asked me to provide a "Server Availability" chart for the last 24 hours that looks like this one: 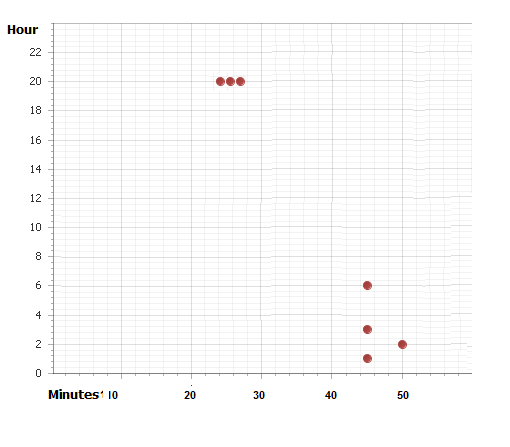 Since I provide COTS (Commercial off the shelf) I'm wondering if this chart really provides useful UI and information. Do you think so?

I have seen the following visualization used to represent down time and it has been effective:

The illustration in the question requires too much thinking.

The linear time line works well for a 24 hour timespan.

This is the way Pingdom chose to visualize it in their Public Status Pages:

(Disclosure: I was the front-end web developer who implemented this graph back in 2010, but not the designer or originator of the concept.)

An aside: COTS stands for Commercial Off The Shelf.

Per the chart - it tells me nothing. Both the X and Y axis are so deep I have to following an enormous gulf in order to guess that the server was down roughly in the timeframe of 20:24-20:28.

Why are there 4 lines in-between the hour lines when they only jump by 2 hours?

My eye also has to wander a great deal, and I have to think a lot, in order to pull out a timeline from this chart. Times earlier in the day are in the lower right with times later in the day in the upper left. Add a bunch more dots and the user is going to freak out trying to figure out time blocks.

A simple listing when a server went down, and when it came back up, would be easier to read and take up less space (assuming your server isn't going down an enormous amount).

Fancy visuals do not necessarily make information easier to parse. If you really must have one, show something that presents the information in a linear progression - such as a timeline - which is how people see time.

UptimeRobot is a tool for monitoring server downtimes (I'm just a user, no other connection whatsoever). They're showing a small graph on the left side for the up-/downtimes for every watched server in the last 24 hours (I edited the image because none of my watched servers had a downtime in this period). If you click on one of the bars, you see details on the right side for this specific server:

Not the answer you're looking for? Browse other questions tagged info-visualisation charts timeline or ask your own question.

6
Representing time intervals in a chart

8
How to visually show status values for a large number of data points?
2
Showing progress on activity over large time period
5
How to show that a chart is a zoomed-in version of a different one?
5
Best way to show your skills on a resume?
3
How to show negative values in a pie chart?
0
Scheduling time-slot over a number of days
1
How to represent a latency chart?
1
How to show time-breakdown × availability from multiple parties in Web App?
0
How to best show a "replenish" meter?