I'm working on an application with a lot of user functionality and navigation which stems from the ability to create, edit,update,delete (C.R.U.D) the majority of objects/entities.

My question is, when navigating with C.R.U.D. functionality, what are the recommendations or standards with displaying content.

Would you for example, when editing a user's profile (customer info): a) Have a pop-up window where you can edit fields b) Replace / refresh whole page with an editable page. c) Open a new tab for to work in when editing this content.

Its going to hard to recommend a solution unless we see some wireframe of what the current design looks like.

However I would recommend doing an inline edit which allows users to quickly change the value and then publish the updates. Facebook does this pretty well as shown below 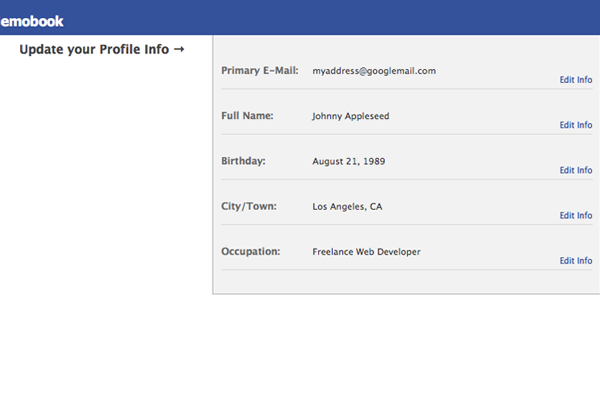 The challenge with a popup is scalablity as the size of the forms to edit might be too huge to display. If you are going for small edits as shown above, it would be annoying for the user to have a popup for every edit and it would also hide the content below which might be needed for him to update his information

Not the answer you're looking for? Browse other questions tagged usability user-behavior user-expectation actions or ask your own question.

2
Primary secondary actions - applicable in this case?
4
What is the best model for editing and viewing data that is summarized in a table?
4
Save/cancel or automatically save on long settings page. Especially on email notifications settings.
4
Do you still mark prefilled input fields as required?
1
Multiple Nested Views in Profile: Enterprise Business Application
1
Is history-dependent navigation after save/cancel actions good practice?
1
Expected behavior when deleting tile from feed
2
Best way consistent with Material Design spec to allow user to access multiple supplementary actions for items in a list?