In designing an online, in-browser game, I found in my research that many other games have "priority" in registration over login on their home page. They usually show a big form for registration, leaving out sign-in to a small space or even under a button click. I find it weird because usually the login feature is used much more than registration. And it's not only on games, Facebook's landing page enphasizes registration over login, too. 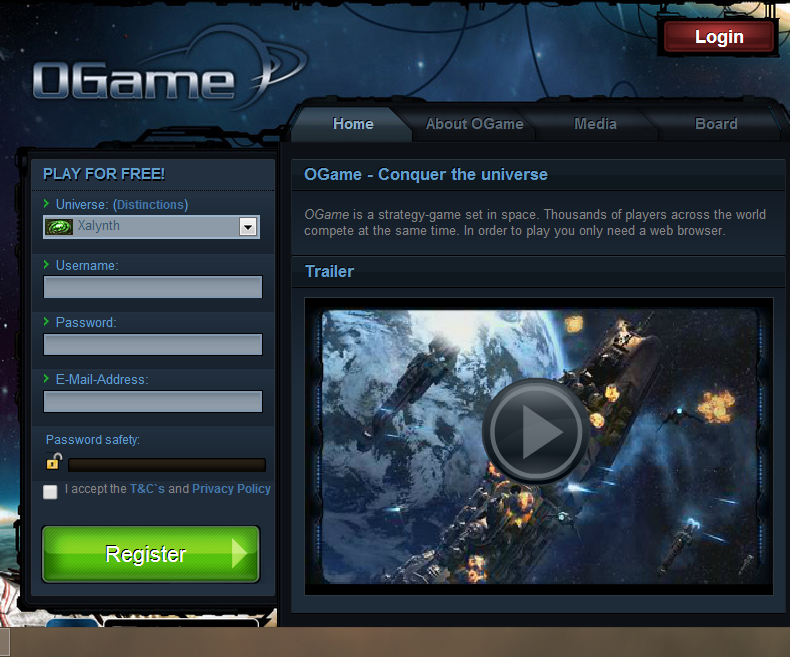 Shouldn't that be bad for usability? Should I follow this on my design?

I'm not a designer of any online game, so I can't talk for them, but considering experience and human behaviour, plus having played some of the games from gameforge, the idea is very simple.

Captive market to make money. Either by selling in game products or by promoting stuff.

They have captivating games that interest people using different techniques, so they have than once you are inside the system you are going to be hooked to the game, at least a good number of people, they don't know for how long,but it's going to be some time for sure.

Other games, and also gameforge for some time, send you newsletters with promotions, and they may have deals with other companies to get their products promoted. Since they already have a big amount of subscribers who are not going to block mails from the game they are playing, that guaranties a lot of eyes.

Of course there may be other reasons more or less legal or moral that we don't know about, but that's even more speculative.

Should you do that? I can't tell.

Simple: a brand new person to a site won't hunt around for a "create account" section for more than a few seconds before moving on. So that needs to be front and center.

However, an existing user will take a moment to learn where the sign in link is and then basically memorize it. Typically they won't even look at that front page anymore.

Point is: existing users have a good reason to spend those extra few seconds looking for, then remembering, where that link is whereas new visitors generally don't.

In the two screen caps you have, Travian is a little more user friendly simply due to the color difference of the login button. It's easier to see. However, ogame's isn't that bad because they are sticking to a known location that a lot of other sites use for the sign in link.

If I understand the question correctly, you are saying that registration is taking priority over sign-in. As in, there may be action the user has to take to get to the login page/modal, whereas the registration is ready for input.

If that's the case, I think its a classic case of putting the user second. I would imagine the reason registration is presented first is because the designers want to get more people registered. However, this is annoying for all users once they are registered. I think its in the users best interest to make login the priority and having the registration easily accessible but not the priority.

Not the answer you're looking for? Browse other questions tagged website-design usability login registration spatial-memory or ask your own question.

16
Landing page vs Home page
0
best way for a multiplayer lobby in a smartphone game
0
Invite visitors to sign up for email from landing page
0
How should I go about making a login system for video game high scores?
4
Do we really need to ask for password on iOS “login with email” screen?
2
Show “Sign Up with” in landing page
1
Landing page without menu
2
Navigation between dashboard and landing page
1
Login or signup on landing page?