We are developing a carpool app. I need to display a tutorial during the registration.

The tutorial needs to convey that we remove all awkward cash exchange by exchanging km's.

Now, these are my home screens. 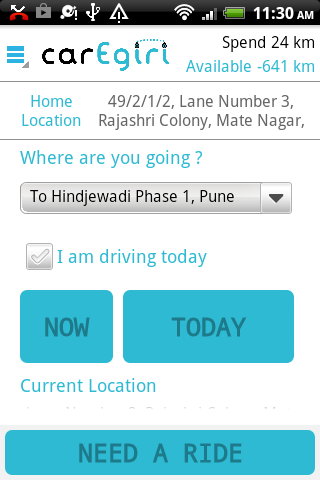 Notice that if need a ride, how much they need to spend is on the action bar. If they offer rides, they earn that much per ride.

Does this tutorial convey the help or make it worse ? 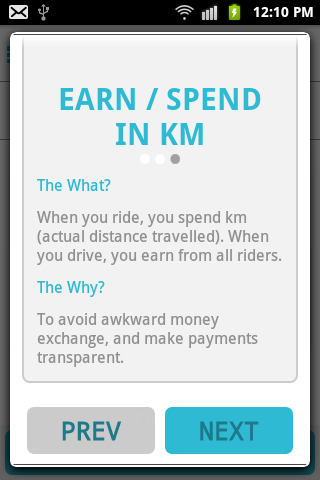 It appears to be a bit confusing only because what you are describing to the user is in a text format and isn't really calling attention to the exact area where they would see what they indeed "earn" and "spend." Several apps I have seen would actually screengrab the element of the app that you are trying to explain to the user so they have a context of what it is and the location of it in the app. With this, while it's not wrong, I could see it being clearer if they saw a small screengrab showing where this was at in the app itself. Also, the "prev/next" buttons seem like a little much, especially because you already have the little circles indicating they can slide back and forth looking at each piece of help or the tutorial. Plus getting rid of them allows more real estate to explain the tutorial.

I did a very quick roughup of a concept just so you could see. See how the element you are discussing is called out on the actual design of the app? The user can then understand this so much easier because they instantly know the location. 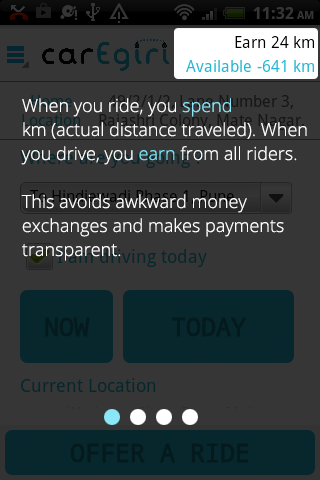 Then as the user slides to the next "dot" in the help/tutorial navigation, you could change the focus to the next element in the app that you want to explain.

Also, just from a design perspective :)...I had a hard time at first glance differentiating the earned km area from the rest of the screen. Maybe call it out differently at the top or dress it up differently. Maybe even adjusting the fonts or bg colors, an element to surround it with, etc. A lot of the text in the app looks like link text and I'm not sure if those are clickable or not.

I also had an issue with the "today" or "now" buttons but that could just be because I don't know much about the app.

I hope this helps a little.

Not the answer you're looking for? Browse other questions tagged user-expectation user-engagement or ask your own question.

1
Simplify the gamification further (carpool)
0
Getting the customer to schedule one more ride (carpool)
4
How to deal with extra space
1
Android design convention for saying a user needs to complete an action first?
1
Android app filtering UX problem - How to combine tab filters with date filters?
3
What is a term used to describe design philosophies that enhance user experience but reduces engagement?
1
Merging tenancies in web & teams app
1
Best practice for out-of-app notifications for in-app messages?