Why don't iOS games show the correct number of notifications in the app icon?

I've observed a common behaviour among most games for iOS devices, they constantly generate push notifications, but show just one on the app icon.

So, most of the time they look like this: 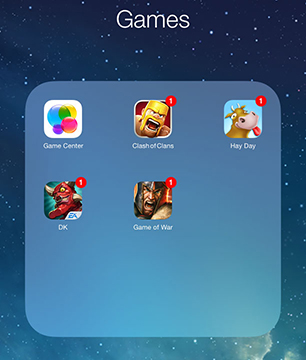 You can't rely on the notifications list either, because those numbers don't reflect what is in the list. 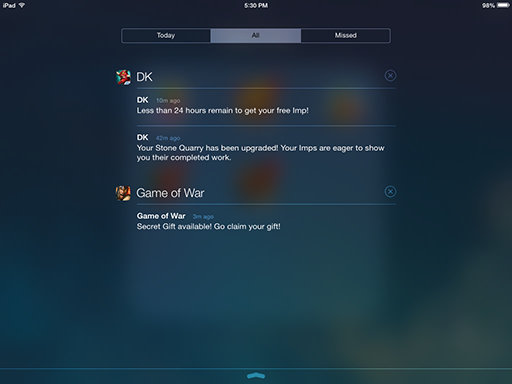 Is it just bad UX design?

I can't believe most games just won't fix such an obvious and annoying bug?

Is it made intentionally, so that you have to open the game every few minutes or so?

Would't it just completely defeat the purpose of the push notification system?

I believe that developers have control over what the badge number is, which is why they can send you a notification and the number not increase. In the DK example you provide, it seems to me that the genuine notifications actually increment the number whereas the spammy "hey do this" notifications don't increase the number beyond 1.

Is it bad UX design? I would say yes, but these tactics likely work so the developers don't mind annoying you.

My opinion is that they're basically abusing the notification system to send you ads. I wonder if Apple has any policies around this.

Update: This article is relevant and supports my thinking - Dear App Store game developers, knock it off with the useless push notifications

It's quite possible (indeed, likely) that this is a good thing for your privacy (albeit at the expense of your expectations).

You notice the two things are managed discretely. In neither case does the app itself get opened (normally), so it can't total the received messages and update the badge (like Mail does). There's a mechanism in iOS 7 for apps to run periodically in the background and check for updates, but it's relatively new.

If the app wanted to keep the notification count and the badge in sync, they'd have to keep track of a count of all the notifications they've sent to your device, and whenever you clear them send a reset message up to the server to say "this user has now viewed all their notifications", and whenever that number changes, send the update badge number command back to Apple to send to your phone. For some apps that are driven by notifications like WhatsApp or Facebook Messenger, that's reasonable, so they do exactly that. On a game, it's not generally necessary to keep track of whether or not you viewed a notification. Instead, they just set the badge number to 1 when they send you a notification and clear it when you open the app.

Even when it makes sense to try to keep the badge number correct, it's not always technically possible. When you choose to clear all your notifications for a given app in the notification centre, nothing gets sent back to the developer or the app to let them know. Which means they don't send the command to your phone to remove the app badge.

This issue could be solved relatively easily if Apple provided the ability to show the badge without any number inside it, but (for now) they don't provide that function to third-party developers.

Not the answer you're looking for? Browse other questions tagged notification games or ask your own question.