What's the best way to present variables in a WYSIWYG editor?

I'm working on a WYSIWYG editor, similar to medium.com. We need to support variables inside the editor. For example, you might want to add text: Hi, *|FNAME|* which would be replaced with Hi, Gustavs depending on who views it.

What's the best way to visually present it? Do you know any sites that do that?

We don't want to use *|TagsLikeThis|*, because it doesn't give the impression that it will be replaced with the real content later.

For replacements I always prefer to use double square brackets with natural language:

Double brackets rarely appear in normal text but are easy to type and read, natural language removes the need to know/lookup field names.

Alternatively you can use real data with highlighting and some tool-tips, bit trickier to implement but much richer for the user. 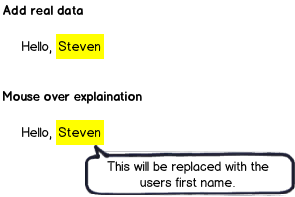 For a programmer this is easy to understand, but for a casual user this might be the first time they have ever used a variable. The biggest downside is that users may edit the variable, for example entering {{TMIE}} instead and wonder why it won't work. Another downside is that it looks very technical and might dissuade some users from using the app.

In Facebook if you type the name of a user or a page, the whole mention becomes a tag that can be deleted as a unit. If the cursor is placed after the tag and backspace is pressed, the whole tag is deleted.

This communicates to the user at least that "this is something you can't modify except as a unit". Besides being a lot more difficult to implement, another downside is that this tag should not be possible to delete, as it wouldn't be clear how to add it again.

This option looks super ugly, but it has the benefit of making it impossible to mess up the variable AND being very easy to implement. 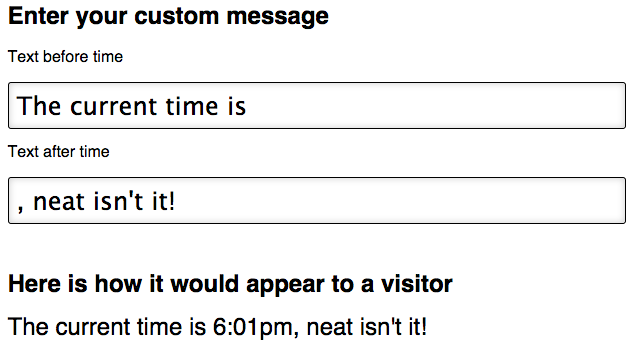 Not the answer you're looking for? Browse other questions tagged tags text-editor code wysiwyg or ask your own question.

12
Does the use of a WYSIWYG editor by itself improve the UX?
4
Contextual error message
0
Best Practices for Code Editor and Auto-complete
10
What kind of text editor should I use for a reddit-like website?
2
In WYSIWYG editors, why for headings the whole paragraph turns into a heading, instead of just the selected text?
0
Should paragraphs in WYSIWYG editor have vertical margins
0
What is the best way of displaying a long title in a text editor?
9
Caret positioning in HTML/richtext WYSIWYG editor
2
Why draw a grid behind text/code in the editor?
1
Validation of a text file: how to best show the inline editor?