Actions and navigation buttons in the same toolbar?

In our application, each view has a title bar and a toolbar. The toolbar contains two types buttons:

As our app is extended, the number of buttons increases as well. Example: 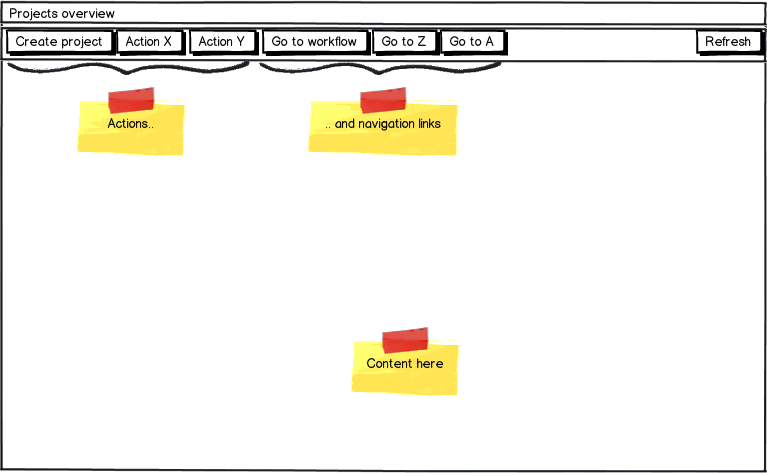 Currently there isn't a good way to tell both categories of buttons apart. What is a common practice for solving this? Should action buttons even be on the same toolbar as nav buttons?

EDIT The action buttons I mention are not related to specific content. If they are, our app will display them in the vicinity of that content.

Sometimes buttons are not content-dependant, so they could be placed along with links, here is an example:

So the roles of controls should be quite distinctive. To make distinction even more noticable, you can separate the controls. So the Gestalt principle of proximity gives clear distinction between these two groups: functional buttons vs navigation links.

The second problem is increasing complexity. Again, if the buttons are not context dependant (otherwise @dendini's answer is great), just display the most important controls and hide others. It's not a new pattern, see the More button on the image:

Desktop applications routinely combine navigation and action controls on the menu bar, so I don’t think it’s inherently confusing. The most important thing is to have clear labels so users can tell what a control will do before they click it. However, there are definite advantages for some redundancy in a design’s communication to users –adding elements that confirm what each control does.

There’re several techniques for distinguishing your sets of controls, which may be combined:

Your solution seems confusing to me and probably to you if you asked this question, and usually if something "seems" then 90% of times "it is".

I would generally expect the top menu bar to permit me to navigate on a certain page and then on that page to be given particular actions.

So actions in my opinion should be where content is, because they are relative to content and not to navigation.

Also consider this, imagine a navigation links lands you to a page where two objects are represented and one separate action for each object is given: with your solution you would have two actions on the top bar with no indication to which object they refer to.

By putting the actions in the content area instead you are giving them meaningful context to the object they belong to.

EDIT: according to your last edit these actions are independent of context, in this case probably a more specific example of such actions could clear the domain. Nevertheless if you don't feel completely confident with putting them on the same bar as the links you should probably consider a vertical menu on the left just like NextDoor example below: 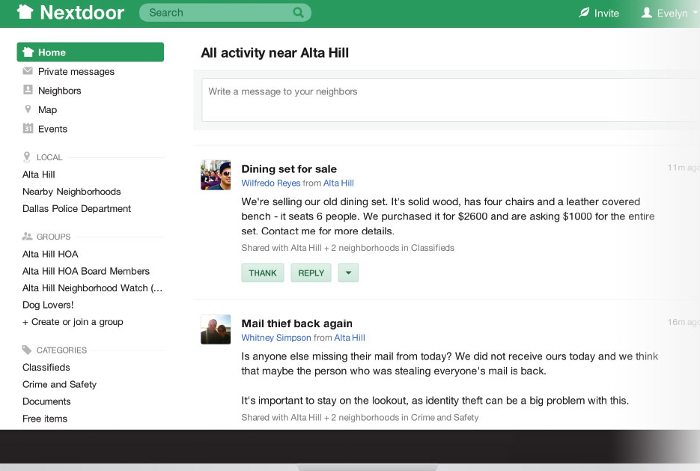 Not the answer you're looking for? Browse other questions tagged navigation buttons toolbar actions or ask your own question.

55
What are the differences between buttons and links?

0
How to arrange Buttons and Tabs together?
1
Separating actions on items from general actions in a toolbar
1
Navigation toolbar design
3
Navigation bar vs toolbar in iPad and related controls
1
Omitting pop-up based navigation
2
On mobile web app, where should primary & delete buttons go?
0
alternative to scrollable tab bar for mobile
1
What is the best terminology to use for buttons for running, saving and duplicating reports?
2
Best way consistent with Material Design spec to allow user to access multiple supplementary actions for items in a list?
2
Is a 'single tab-stop' a valid goal for a toolbar which is almost the whole of the UI?