I'm a UX newbie and I'm trying to design a page of image thumbnails. I came up with this: 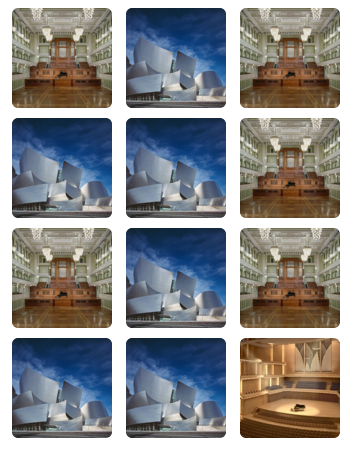 The trouble is that this layout creates the Hermann Grid illusion. When looking at the grid, most people see flickering black dots in the corners.

Can anyone suggest how I might modify my layout to avoid creating this illusion?

The illusion is caused by bright areas exciting retinal neurons while surrounding dark areas simultaneously inhibit them, causing bleed (lateral inhibition). Thus, the idea is to reduce the bright areas at the corners so that those neurons aren't excited as much. By putting the images closer together, you can lessen the illusion and use screen real estate more efficiently. 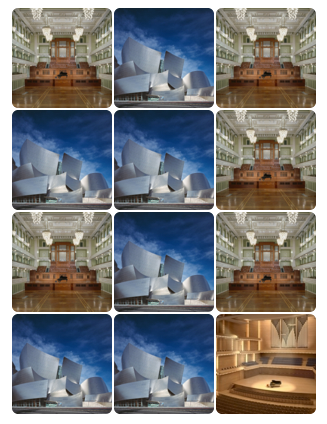 You can reduce the bright areas further by removing rounded corners at intersections. This practically eliminates the illusion. 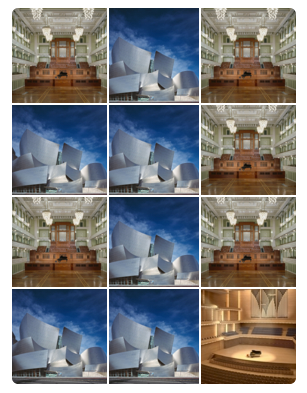 You can extrapolate from the underlying neurological theory to create other possible solutions.

Reducing the contrast by making the background darker avoids the conflicting bleed between those neurons, so that also eliminates the illusion. (Sorry for the poor editing in this one) 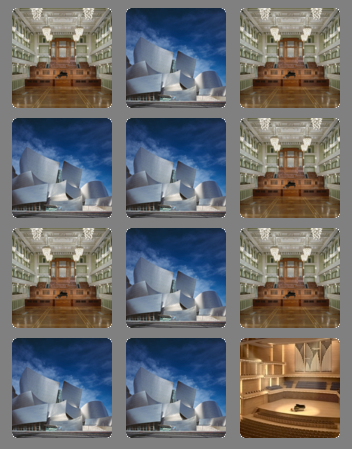 You can also move the images far enough apart that they go out of range of lateral inhibition. 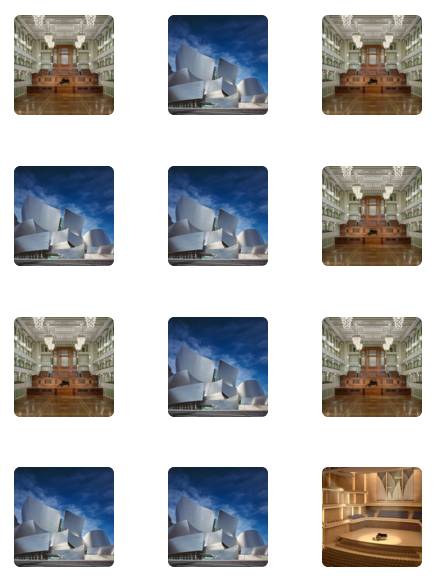 Granted, not every solution will be good UX.

As Franchesca explains the problem seems to arise when there are strong contrasting colors in the grid. In your case: Dark images and white background.

This page describes how the problem can be dealt with when styling tables:

Another post I found discussing this (and other) optical illusion(s) states the same answer:

Try considering a different color for the background, like a soft gray or blue to ease the contrast. Easing the color on the images will also help you if that is an acceptable solution.

The contrast between the white background and the dark edges is a significant factor. If you can't change the colours themselves, try setting a radial transparency gradient on each thumbnail which fades towards complete transparancy at the edge instead of having a hard edge. See this page on gradients in css for ideas on how to achieve this effect.

According to the article: How the Hermann Grid Illusion Affects What Users See

The hermann grid illusion occurs when a grid of images have equal margins of more than 2 pixels. Users will see gray ghostlike blobs at the intersections of the grid. But when they focus on the intersection, they won’t see anything.

It lists 4 ways to avoid the illusion in image grids:

Use a different background color instead of white, like black b/c seems to me that the effect you describe would be less prevalent in a dark to light miraging. If the images are dark colored, border them with a light border (and nifty effecting as described in some of the other answers).

Not the answer you're looking for? Browse other questions tagged layout grid graphic-design or ask your own question.

2
Are there any guiding principles for using the Gutter space in web products (websites, mobile sites, mobile apps)?

4
Attractive website layout without a tile of thumbnails
0
Is an accordion worse than a grid?
2
A survey of grid box layout user experience design
3
Where should the submit button be for these type of compact forms? (bootstrap 3 module)
2
I'm considering two different layouts for an index of articles. Which of these is more usable?
2
Good way to show Application reminder on home page
2
Comments and Attachments UX
5
How can I manage a module creation screen with multiple lists of templates selections
2
Expand/Collapse button directions in tree table ie data grid versus non-table applications