Form with both save and submit buttons

I am working on a Web application that consists of a number of forms. Each form can be edited and the user can elect to save their work so far and come back to resume at any time. However, once the user submits, their response is marked as complete and they are no longer able to continue editing it.

Right now I am representing this with floating buttons labeled "Submit completed response" and "Save and continue later," with the submit button having a highlighted color and the save button having plain white to match other buttons in the application.

I've received some reports that users do not understand the purpose of the two distinct buttons. I've added a help link below that triggers an overlay explaining the use of the buttons, but I'm not sure how satisfying that is (I'm not really optimistic about users bothering to read help text, even if it's only three sentences long).

Is there a generally accepted convention for this sort of functionality? Other Web applications with similar functionality? I searched but mostly found a lot of argument about whether buttons should be labeled "save" or "submit" -- clearly not a question in my case, since the buttons represent different actions.

The client has suggested changing the colors so the save and resume option is highlighted, but my hunch is that hardly anyone will choose "submit" if I do it that way. 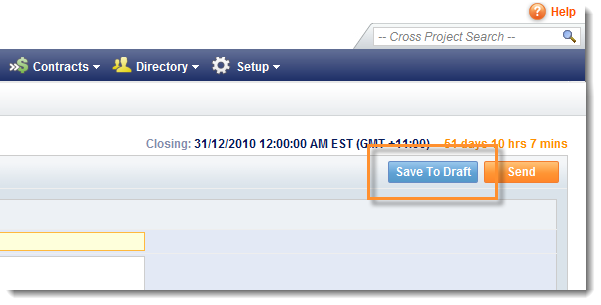 With regards to the positioning of the buttons ,I am not a big fan of the example above as the submit\send button is right next to the save as draft button and there is a chance that the user might submit something without completion by accidentally clicking the submit options.

Not the answer you're looking for? Browse other questions tagged website-design usability web-app buttons or ask your own question.

5
Form creation application: how to differentiate the "save form" button from the "submit button" in the form

34
Should "dangerous" buttons be big and red or small and inconspicuous?
14
Usability of hiding the submit button (and using the enter key to submit)
3
What is the optimal position for groupings of odd numbered buttons on a form?
7
Form design and placement of action buttons
5
Form creation application: how to differentiate the "save form" button from the "submit button" in the form
1
Form validation and 'Save' button color
0
save, save as, load, reload buttons
2
Yes and No buttons are both positive. Is it okay for these to both be green, implying 'success'?
26
Save buttons that don't save
4
How best to display a rankable list with a heading and submit button?