My (desktop) app has a LTR (left to right text) window which displays data in a table. The table takes most of the display. The left most column (and the 3 coumns that follows) is a LTR colum, while the right most column (and 2 columns preceding it) is a RTL (right to left) column.

My users mother tongue based on RTL, while the app based on LTR (a lot of english technical terms are involved). Therefor, while the reading direction should be LTR, I'm afraid that untrained users might read the data from RTL.

I'm thinking of using colors (the screen is pretty much monochromatic) to emphsis the right direction, but I want to explore other possibilities. 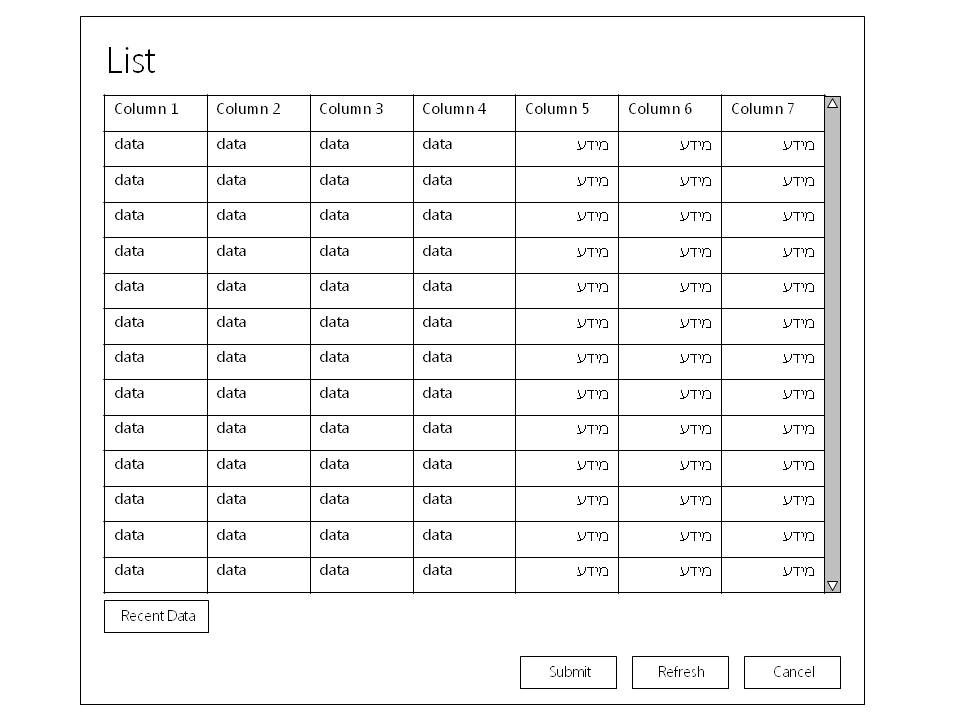 Edit: the table contains 2 languages because that's how the data is shaped- out of my scope

Reading ability has two divagating research theories where one suggest words as shape, and the other as words as letter sequence. Both theories suggest that ordering, sequence or shape is important for recognizing words or sentences. Alignment in columns would in this case work as a signal for the reader in which direction the expression is intended to be read.

Flush right or RTL in columns

In other languages that read text right-to-left, such as Arabic and Hebrew, text is commonly aligned "flush right". Additionally, flush-right alignment is used to set off special text in English, such as attributions to authors of quotes printed in books and magazines, and is often used when formatting tables of data.

That data is often numbers or date, which also is right aligned even in LTR languages. Mixing both RTL and LTR is quite common in table data, and users understand the differences as they are used to them. The most important part is to honor the alignment most commonly known by your users.

When we read - we read the shape the word gives us, which also explains why you should use lower case letter rather than upper case letters in long texts. Humans recognize the shape - which we were taught from the very beginning.

Reference: The Science of Word Recognition

This knowledge has been true for a very long time until Ph. D Susan Weinschenk informed the community in her article 100 Things You Should Know About People: #19 — It’s a Myth That All Capital Letters Are Inherently Harder to Read that the shape theory is wrong:

It’s parallel letter recognition, not word shape — The old theory on word shapes comes from a psycholinguist named Cattell who came up with that theory in 1886. There was some evidence for it, but more recent research shows that it is letters you are recognizing and anticipating. You don’t recognize words by the shape of the word. You recognize familiar letter sequences. The research strongly suggests that you recognize all the letters in a word at the same time, and then you use the recognition of those letters to recognize the word.

Still, reading a word as a shape or in letter sequence, suggest that you should organize letter as you read them – RTL and LTR. Users knowing the language will recognize either way.

Not the answer you're looking for? Browse other questions tagged tables rtl or ask your own question.

8
When is a table the proper way to present data?
1
Fixed row headings for a wide table on a mobile website?
2
Improving data usability
1
Material design - Data tables
1
Comparison table
3
Fractions (“X out of Y complete”) in RTL Languages
5
Mixed alignment (LTR and RTL) in language selection list?
1
Which of these is the right way to let people reorder columns in a table
1
About the actionable data table