For a product site, I am preparing a pattern to review products.

To prevent spam (and due to legal requirements) we need the reviews to be confirmed by users. In my example, I would like to use email confirmation (user should click a link to confirm his/her review).

There are some things I would like to address in my pattern: 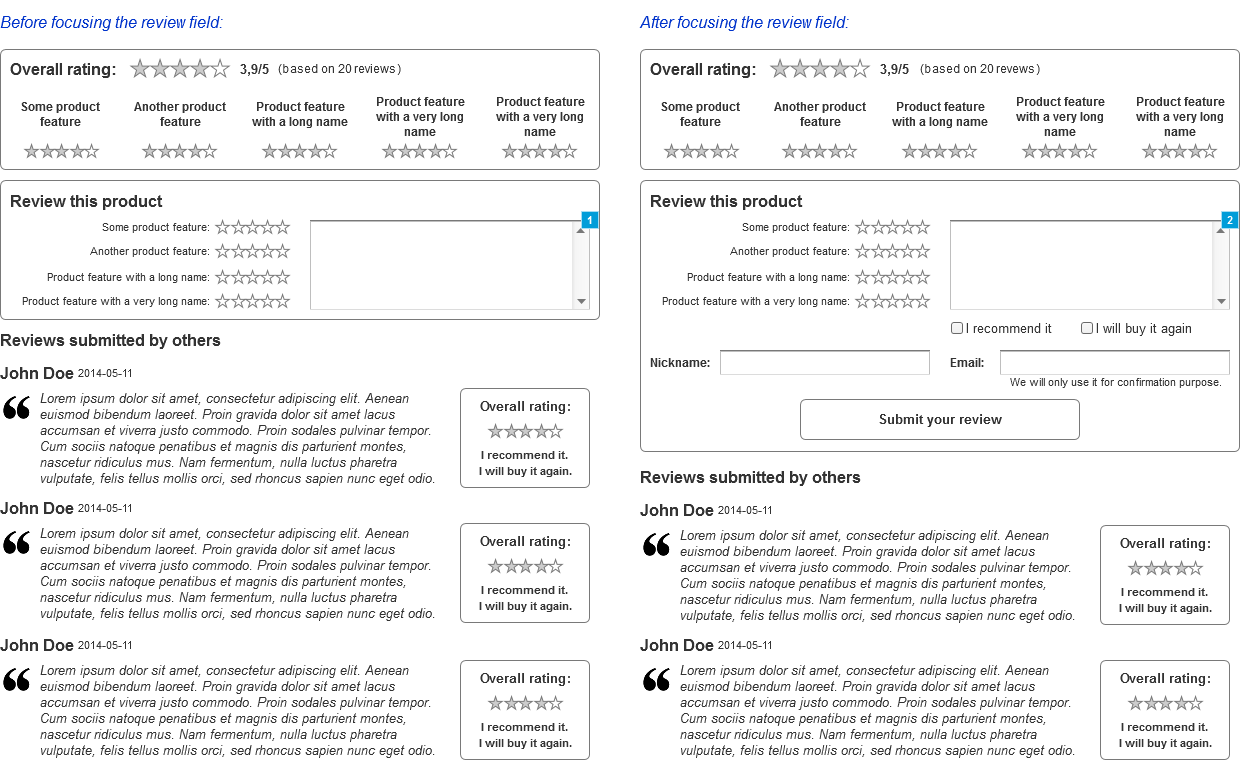 Of course, after leaving the review user will be shown some short "Thank you" message and then the whole form section will be hidden.

Do you think this approach will work? Are pros of it higher than cons regarding conversion centered design?

You’re following the pattern of commenting on blog posts, which also don’t need site centric sign-in. You can leave replies with the credentials of a third party identity provider (Facebook, twitter, google, open-ID…) but I don’t see that option here. I hope that it’s because users don’t have to identify themselves. In addition, that gives us a problem.

If a user only have to add a valid e-mail address (validated by regular expression) the e-mail don’t have to work, which makes the system vulnerable to spam and bot posting. To avoid bot posting, you can use CAPTCHA, but you won’t get rid of spammers. To minimize these you need a third party identity provider.

You may conclude that you’ll handle spam and bot posting through moderation so you don’t have to use a third party identity provider nor CAPTCHA. However, the quality of the review stand the risk of being less significant since you can leave anonymous posts (provided the user uses a false e-mail address). The problem is you don’t know, and your review readers don’t know. The quality of reviews can be questioned – and that’s a real issue.

If you want to have quality and not quantity reviews, you need to identify the reviewer in some way – but at the same time make it easy to leave a review I’d leave as many third party sign in options as possible.

Having visible reviews itself is a really good idea since it tells the users that it is encouraged to do reviews’ and that you (as site owner) consider reviews as important as the content/product on the same page. Well done!

Your proposal seems to have been carefully though, and I think you are covering all the areas, that's why it's difficult, for me at least, to pinpoint a real question on your ... question.

If the question is if having the form right there, at first sight is going to be good or bad; I don't think there should be any problem and it seems quite enticing. Of course, there are people that just will never leave a review, and some people that will be eager to do it, for those extreme situations, I think that almost no design will change their perspective. But for the people on the middle, that may or may not do participat, having it handy is always a good "help" or invitation, specially since you are removing elements, making it look friendlier.

I wouldn't consider your design as space saver, although it is, I would say it's friendlier. Of course, you can have people thinking that something is missing, who has seen a from without a submit button?. So even when saving space is good and making it friendlier is good, try to let people know that there is something more on that form, may be a simple arrow and a grey band at the bottom part of the form area will suffice.

If the question is about confirming identity, If people don't know that before posting the review, I think you should inform them, at least when the rest of the form appears. You already mention it underneath the email field, but I have the feeling that the idea may not be clear enough, people may think that the review is going to be posted any way and that the confirmation is just for the system, or to make the name/email of the reviewer appear on the page, and that otherwise the review would be attributed to "Anonymous".

About using systems like Open Id, if the target audience may know what that is, you may consider using it, but if the expected target may get confused by it, don't do it. ABout options like Facebook or other sites like that, consider also the audience, are they more concerned about privacy? If so, they won't use a social site login. Also, like with Open Id, can they feel that if the click on a Facebook icon they are going to be redirected to that site, or doing a "like"? If so, don't use it, if the main target audience is familiar with this options or they are flexible enough to understand/adapt, the use them.

Using a honeypot is a good idea, specially if you don't have any other mechanism for blocking them to reduce their impact. Not to mention that it will reduce moderation time. But one question about using them. Is there going to be any mechanism to use the data gathered by the honeypot? Somebody is going to add IPs or user agents to a blocking list? Or the honeypot is just going to work as an instant gate keeper. Because both options are good, but using the data gathered is much more efficient and would improve the system over time.

3
show password user experience
1
Would it be bad to display missing fields before the user clicks submit?
1
Allow as many user reviews as the number of people involved in a transaction?
2
How to make it clear that two related forms submit separately?
2
Should users be allowed to sign up using an email that has already been used...but it's not yet confirmed?
5
HTML embedded forms on Email V/S Individual page for form
1
Should a field be marked as required based on a previous field?
0
Should empty optional field displayed in form overview before submitting?
2
Validate an email while this in the input field - when do you start?