Yes potentially a cardinal sin, however, we were wondering whether our navigation should drop down immediately on our website when the user visits it?

For example, Amazon.co.uk drops the navigation down near immediately when you visit the site for the purpose of guiding you through the navigation structure. The user can actually close this navigation bar by pressing the arrow down button, however, what happens if this navigation appeared for a few seconds, then disappeared unless/until the user rolls over that area?

We only have one navigation dropdown of "shop all our products" and the reason for doing this is that we don't think this one single tab is prominent enough. Please understand we are technically impaired for doing the navigation in a different way.

The advantage of amazon's side navigation is that it acts as a preliminary reference point for users as they land on the home page and scan from left to right to guide them with regards to how they can get to certain sections in the website. 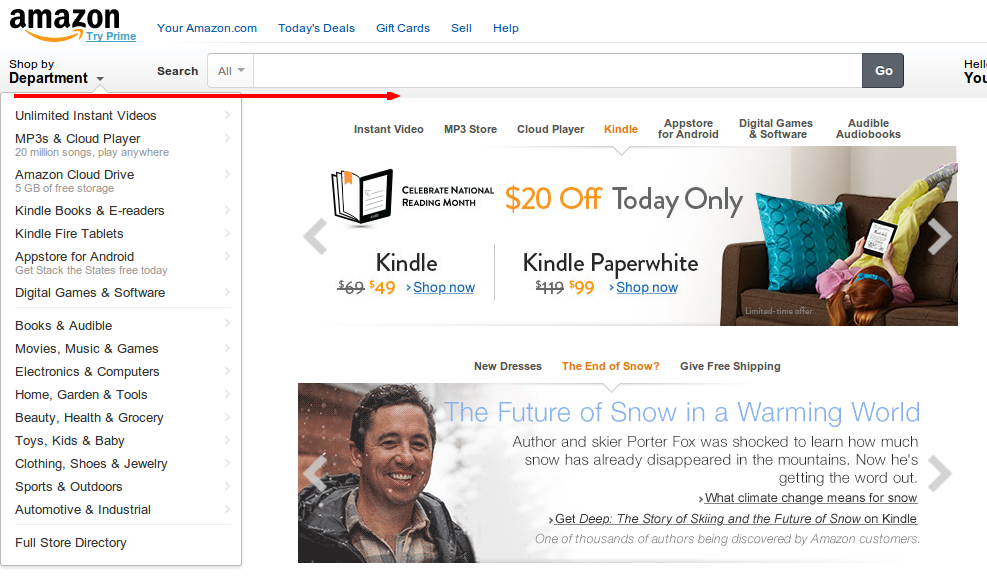 Coming to your navigation pattern of showing it for a few seconds and then closing it, I strongly recommend against it as users might not have time to react and might be surprised by the sudden interaction which appears and disappears before they had a chance to check it out.

With regards to navigation which appears on hover, I dont recommend it as hover menus can cause a sudden interaction and open up when the user is not expecting it. To quote this article about hover menus :

Many designers seem to believe that when their menus open on hover, they’re faster and easier for most users to use. It certainly might seem this way at first, but when you look deeper you’ll notice that the opposite is true. Hover menus are actually slower and harder for most users to use. Menus that open on hover do save users a click, but that first click is necessary in letting the website know that the user wants a menu to open and is ready for it. It also confirms to the user that something is happening as a result of their click. This behavior matches the user’s mental model of how most websites work. Clicking for something you want has never been an issue for users. What’s an issue for users is getting something you don’t want or don’t expect simply on hover.

On a website, users will often hover their mouse over many things. This is something that most users do to see what’s clickable. When hovering tells users if something is clickable, that’s when its most effective. But when it opens something before the user has even asked for it, that’s when it can surprise and overwhelm users. There’s no benefit to getting something you don’t want extra fast, if you don’t want it. When this happens, it becomes more of an annoyance than a benefit.

So if you do go for the hidden menu option, I would recommend going for the on-click option as opposed to hover.

we were wondering whether our navigation should drop down immediately on our website when the user visits it?

We can't say with any certainty without seeing your site.

But if you are doing it because people aren't noticing your navigation, then that is perhaps one solution. However, I'd challenge you to come up with other solutions as well, as a navigation that people can't find is a rather large usability issue that probably deserves some further exploration.

Not the answer you're looking for? Browse other questions tagged navigation dropdown mega-menu or ask your own question.

21
How do users expect dropdown navigation to work?
1
Detail page with different main-navigation dependent on inner-link vs. landingpage
10
What is the standard on always showing/not-showing second level navigation?
1
Pagination on navigation links?
14
What is a good alternative to drop-down menus for site navigation on touch-screen/mobile devices?
26
Can I safely remove search functionality?
13
Drawer Navigation vs. Drop Down Menus
0
Split button for navigation?
1
Navigation history on scroll in single page applications?
2
Navigation of sister sites