Should I capture exceptions and present a nice error page to hackers? [closed]

If a hacker is trying to hack, should I present a pretty error page or redirect somewhere instead of a generic/cryptic error? I feel that the hacker knows what they are doing, I know what they are doing, they aren't supposed to be doing it, so I have no real incentive to put the effort into their experience. It was a hacker because there was a high load of attempting to crack passwords at /users/login.

There are couple of user bases to consider here.

While I can understand your objective to be aggressive towards towards the first group, I don't think your second group should suffer the consequences of a careless mistake or lack of knowledge which led them to make this mistake.

This doesnt convey anything to the first user who did it by accident and by providing him with a cryptic error page you are just going confuse him further. 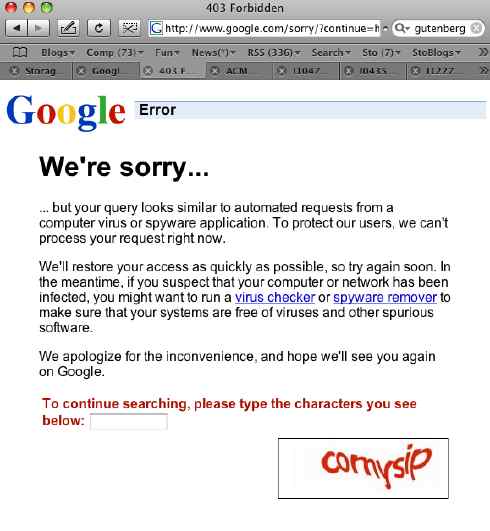 Similarly here is another example of how google handles a server which was accidently sending automated results to Google (do note the user was not aware of it, which puts the person in the user group of not being aware that he was making a mistake).

I don't usually run Google searches on FireFox only to see some detailed information as provided by SEOQuake. Yet, today I was searching for some potential answer to a problem I'm running into with MS-Access which crashes a database and ran those on FireFox instead of my favorite: SeaMonkey.

As I was testing, all of a sudden I got the screenshot as shown in the figure below. Although it did not feel like I was sending automatic requests to Google, the SEOQuake toolbar does so on all the results! That means each time I do a search "I" send at least 11 requests to Google. After 3 or 4 searches with pretty much the same terms each time, that's well over 40 requests within 2 or 3 seconds.

That's the first time I got this screen, I'll have to think of turning off the SEOQuake bar whenever I do intensive searches like these. 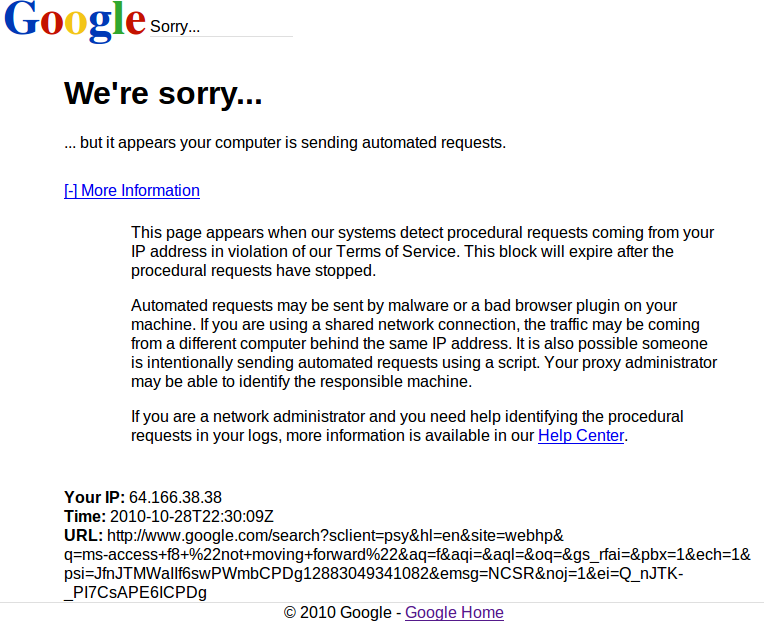 If you are sure that the user is hacking, give him a Javascript alert(). It is the bad UX he deserves! (Alternatively, redirect him to a song by Rick Astley.)

If there is a chance it was a valid user making a mistake, then you should provide a message that will help put him back on the right track. Something like "Sorry we do not accept strings containing HTML markup".

If you want to inconvenience and slow down the hacker, make him think that he is making progress. Give him something like a spamtrap or a honeypot to waste his time on.

A classic way to deter a hacker is to simply delay his response. (You can find many systems do this when you enter an incorrect password, rendering bruteforce attacks impractical.) If you make him experience increasingly long delays before he receives each failure response, he will either give up or timeout. A valid user will tolerate some delay while they strain to remember their password.

Hackers don't deserve good UX, they deserve bad UX or no UX. So don't waste your time on this unless it could improve security which I can't see how.

Not the answer you're looking for? Browse other questions tagged website-design web-app security experience or ask your own question.

67
Should I show the troll that I know he's trolling?

11
Should a search page have a clear button?
5
How should I present landscape-orientation page thumbnails in a series of portrait-orientation thumbnails?
4
Should link to restore user account lead him to login page?
1
Should my Home insurance transactional site have a page footer?
1
Grouping and present a part of the form as optional
7
How best to securely present personal info in a members account page
1
Best place to display error message in the page?
5
Users aren't allowed to reuse old passwords for security reasons. How to alleviate this pain point?