Why do Macs only have one mouse button?

Why do Apple Macintoshes only have one mouse button? It seems useful to have at least a second one for options that aren't regularly used.

It's because Apple explicitly mentions in its Human Interface Guidelines that all software providers should provide all functions available with a single click and they don't see any use case for providing a right click.

That said, it does support an option to have a secondary click as shown below which brings up the contextual menu 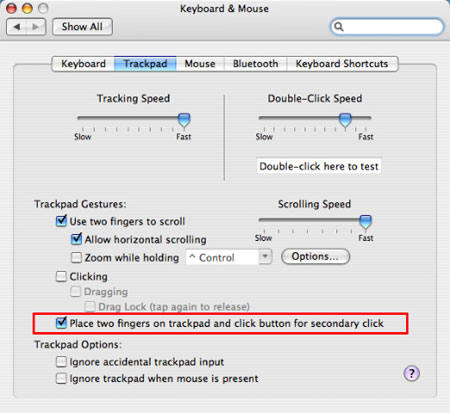 Now coming to the reason why Apple might have gone that route, there was a discussion in the slashdot forums why apple prefers to have a one button mouse.

The general consensus was that the reasoning behind the primary design decision was to remove the confusion among the average computer user for remembering which button to click and therefore increasing the intuitive usage of the Apple user interface.

The first reason deals with the technical ability of the average computer user. Having once worked doing technical support, let me explain one very common point of frustration for techs. Here is an example:

Me: The right mouse button

I kid you not, ten times a day I would talk to someone who has never right clicked in their life. After they first do it, they will ASK YOU EVERY TIME if they should right click or left click. Now, though we may not be the typical computer user, Apple is always concerned with creating a user experience that is as intuitive as possible. Giving the average person a right mouse button is like giving a bald man a comb.

Secondly, Apple wants all developers to follow their interface guidelines. The reason for this is tied into what I wrote above. If every application can be expected to work the same way, the learning curve for the user is minimized. Apple has gone through great pains and great expense to study human-computer interaction. Because of these studies, one thing Apple insists on is that every feature of an application should be accessible through menu items. It’s great and even encouraged to create additional ways of accessing features, but at a bare minimum, you should be able to reach it from the menu.

One of the slashdots post also has this to say

I am old enough to have read several "Byte" magazine articles about the Macintosh when it first debuted in 1984. The justification for the 1-button mouse was that the Apple engineers wanted the operation of the pointer to be as simple as possible. They felt that having 2 buttons would confuse the user since she would need to remember the specific functions associated with each button

All of this said, one of the big downsides of this single button option resulted in the headache of using double click which was introduced by Apple in 1984 when they introduced a single button mouse along with the first Mac.

To quote this coding horror article

It was basically forced on the industry by Apple Computer when they elected to use a single button mouse on the original Mac in 1984. Technically, double-click is an optional shortcut for clicking an object and then clicking the File,

Earlier Macs had only one button, supposedly less confusing than 2 or more buttons, but this proved fairly limiting. Two button mice were standard on early Windows systems, and software that relied on 2 button semantics (most software) treated control+mouse button as the secondary button on Macs. This required 2 hands, somewhat clumsy, especially when you're used to that second button on the mouse.

In 2005 Apple release the Mighty Mouse, their first mouse with more than 1 button, that had 4 effective buttons.

Having no right click may seem easier for the average user but if one is used to having a primary (left) click and a secondary (right) click, then for that person it would seem more natural. I have always used windows laptops and desktops, so it took me a while to get used to the single click on macs. I also noted that it can sometimes be a bit annoying because the trackpad will not always register both of your fingers so you may accidentally left click when you intended to right click.

Because Apple is still in their infancy stage and is unable to break out of that mold. I always used a 2-button mouse even when I exclusively used Mac, particularly back in Mac Classic. Even though I wasn't using a PC, I just never understood the reason for a one-button mouse; maybe for newbies but once you grow up, you join the big boys. Plus I never really cared for the feel of the Apple mouse when PC mouses were designed so much better. I remember just thinking how great "Finderpop" was. If you had a very large monitor, why go all the way over the AppleMenu, when you could just right click and be able to access the Apple menu. Or if you were using several monitors.

Not the answer you're looking for? Browse other questions tagged mouse mac-os-x apple hardware or ask your own question.

5
Why have two mouse buttons when one is sufficient?

10
Which is more important, less mouse distance to travel or visual consistency?
13
Why are keyboards, mice designed to make sound when pressed and clicked?
5
Why have two mouse buttons when one is sufficient?
259
Why do washing machines have windows?
27
Why does the green “+” button in Mac apps only maximize the height?
3
Are 12000 dpi laser mice overpowered for the human wrist?
9
How should Likert scale options be ordered?
114
Why did the mouse beat the light pen, paddle, and other pointing devices?
8
Best method(s) to allow closing a popup
6
force-click vs secondary click (right click) in OS X?