What is the common practice to save settings in Windows Desktop applications with config file? Is it acceptable to change settings only in run-time, but in file optionally? If Yes, how to provide this option to user? (details below)

Originally there was possibility to change parameters only for current run-time session. Later I received requirement to allow to user possibility to save "somehow" optionally/explicitly changes to config file too.

I implemented in next way: When user performs changes and then click OK Button other dialog is opened, asking if it want to change settings in file too.. (similar like in Windows Explorer, folder properties, read-only flag, another dialog is opened to ask if apply to sub-folders) 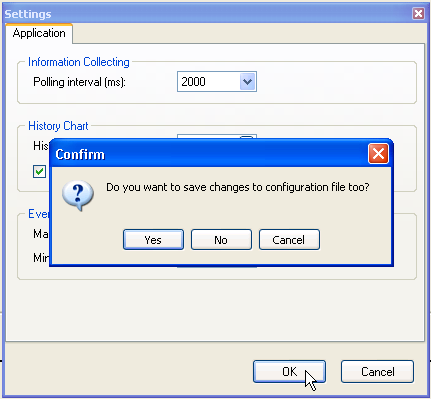 Is there a better.. or RIGHT/correct way to implement such logic?

I think the problem is you are looking at the technological implementation instead of the user experience. The user generally doesn't care where they are saved, or how they are saved, only that they are saved. So instead of asking the user to deal with files, assume the user expects you to save them. It's then your choice of where to save them. Use a versioning system, at least keeping the prior saved state. Then, offer the user the chance to "Use previous settings?" or "Undo last changes?", or even "Reset to defaults?

Instead of a confirmation pop up after user has clicked the OK button, the better user experience would be adding a "Save changes to configuration file" check-box within the Settings window. User experience benefits include: 1. no annoying pop up after the OK action; 2. present all possible options when user is in Settings; 3. less clicks.

I think this is like how Microsoft Word behaves when it asks for "save changes to normal.dot template?" or something like that. That gives me a knowledge that Microsoft Word might not, and able to save my changes as default for future documents (even though they didn't make it clear at first time, what the heck was normal.dot?). I think the best way to implement this is that you need to have / preserve:

On windows it is common practice that when changing settings these are preserved from then on.

Which means that the new settings should survive stopping and starting the application. And that in general means saving them to file or to a database.

To be blunt: I would curse - and probably remove - any application that did not remember my settings from one session to the next.

Not the answer you're looking for? Browse other questions tagged desktop-application save settings confirmation modal-windows or ask your own question.

17
Save vs Save & Exit
3
Is autosave appropriate for password fields?
3
Saving multiple files on program close
3
Predecessor having a bad influence on file saving method
8
Best Practices: Save and Exit in Software UI
0
'Share' or 'Export' to get data out of an application
3
save/cancel dialog from pressing cancel
2
Best practice when saving settings to backend on Android
0
Ask metadata for each file added to a folder (possibly many files added at the same time)