When unsubscribing from e-mail subscription services, do users need a confirmation e-mail?

When we sign up for a new service, it’s not uncommon to tick the checkbox “weekly digest e-mail” or “newsletter” and that sort of thing. In the beginning, we’re excited about our new service, but, as time passes by, we stop reading these e-mails until one day we find ourselves trying to clean up the mess that has become our inbox.

The question is why does the service feel the need to send yet another e-mail? And what are the User Experiences from that e-mail? Furthermore, and maybe even more to the point, do users even need an unsubscribe confirmation e-mail? 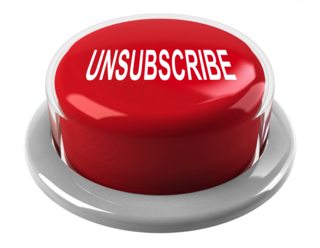 Users do need confirmation e-mails. Those e-mails become receipts of sorts, or evidence, stating that the company acknowledged they were terminating the service. If the service, for whatever reason, was a paid service, the user would then have something tangible that could be used if legal action became necessary. For instance, if the service didn't terminate when they said it would and the user kept getting charged.

As quesoflorecido pointed out while its a confirmation from their system that you are now truly unsubscribed, its also a last way to potentially try and get you back into the system. Facebook does this by trying to get you a guilt trip where they show you images of friends who "might miss you"

On the other hand groupon tries you to engage you again by showing you a funny video where you can potentially punish someone since you are leaving. 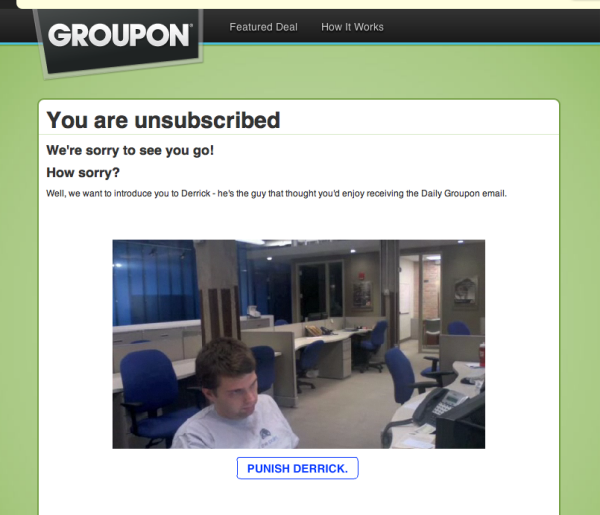 Groupon asks you if you'd like to punish derrick for adding you to their mailing list and then once you press "Punish Derrick" they do just that. A guy walks in with a cup of water and after criticizing Derrick he goes ahead and throws water in his face. It then goes on to take you to the following frame: 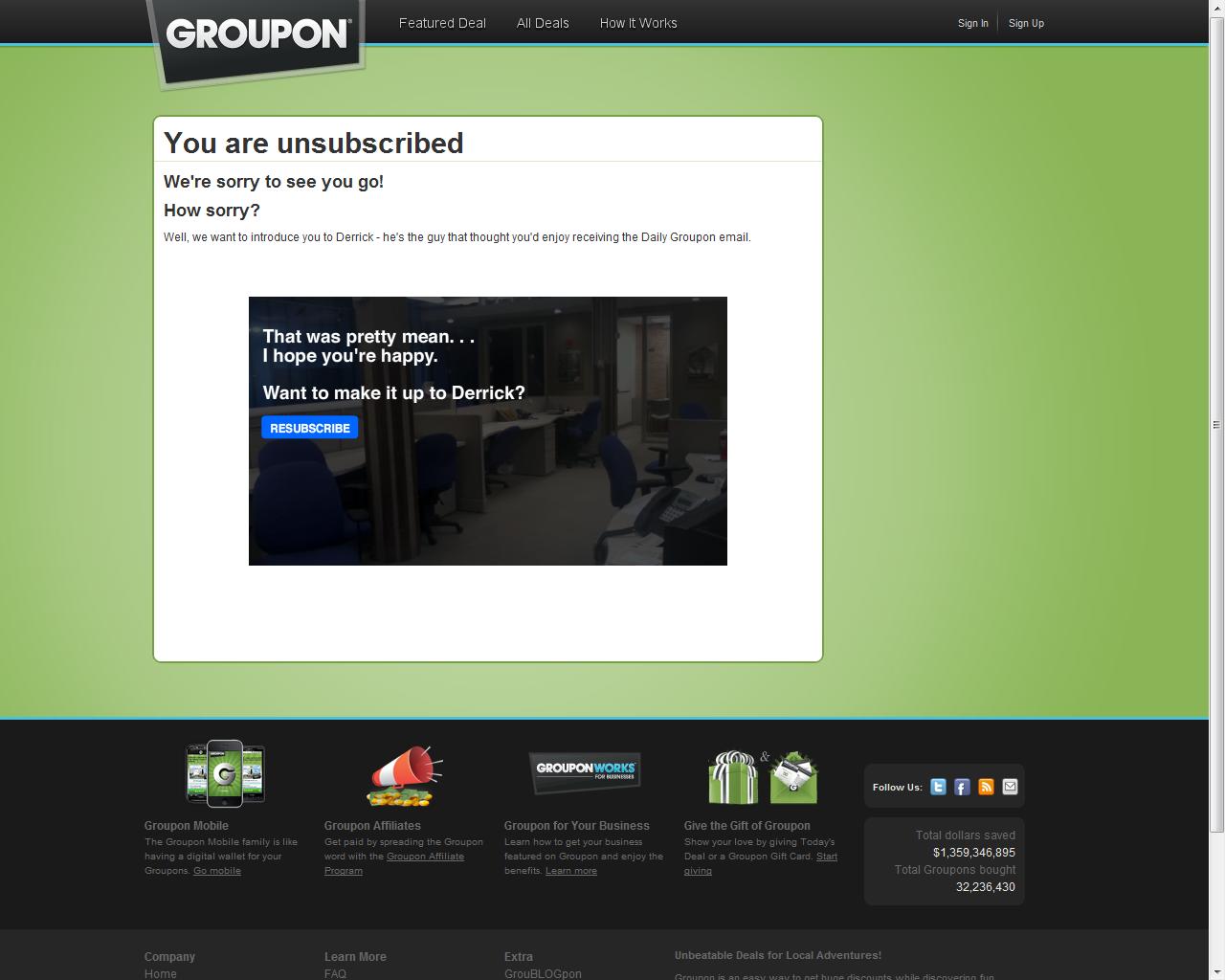 So this way they can try to get back you into the system either through humor or a guilt trip.

My (rather disappointing) answer would be - because this process has never been through UX review; 'it was written by programmers'.

Consider the task model for unsubscribing from an email newsletter (and as with task models - they represent real-world behaviour, not a system realisation):

Now 3 can easily be provided by the unsubscribe page - there is really no need for a confirmation email.

Sure, as Code Maevrick mentioned, if the subscription is paid (I'm not aware of any paid newsletter) then the email serves as a form of a receipt. (Although in real life we often cancel or change paid services over the phone and little concern that the only form of confirmation is in verbal form).

I could even think of a better reason - the email serves as a form of error recovery. Say in your absence, your son pressed the unsubscribe link by mistake and there was not 'are you sure' barrier. But even this is such an extreme case, that personally I wouldn't bother.

What is rather flawed in the unsubscribe process is that most implementations don't put sufficient error guards in place, where at least they should ask you the 'are you sure?' question (you may have pressed the link by mistake). But the real issue, particularly if not such 'are you sure?' barrier is in place, is the lack of undo mechanism allowing the user to re-subscribe in one click. If you have unsubscribed by mistake, it would normally take you quite some time to re-subscribe manually.

Simply put - the user needs a confirmation of some sort. What would you think if you received no confirmation at all, then a week later, the same newsletter came again and clogged up your inbox?

Users need a confirmation so they are assured that they have clicked the correct link and have actually unsubscribed. They also need the confirmation in case they didn't click the link - maybe their account was compromised. This last email might inform them of something they didn't know was going on.

Another email may be annoying at first, but to not receive the email/confirmation and be left asking if by clicking that link actually unsubscribed you - that might be worse.

Users unsubscribe because they don't want to hear from you anymore. Typically, in a family you have people who click on every button available, then complain that their mailbox is full of spam, and then the only computer literate person gets the thankful task of unsubscribing all these newsletters. At that point, they usually don't unsubscribe one (yours) but a dozen newsletters. And they really want this process to be as painless as possible. Please, no more emails. Including confirmation e-mail.

And in all newsletters I have every seen, the "unsubscribe" link is intentionally so small that it is impossible to click on by accident, so no further safeguards are needed.

Note that all these is from the point of view of the user. Your company's marketing guys will have a different point of view obviously, they will want it to be as hard as possible to unsubscribe, while staying on the legal side.

This is one of my pet peeves. The mental state of a user when unsubscribing is full of frustration and this is only exaggerated when receiving that confirmation email.

However, I do see the need to have some sort of record for unsubscribing if the company is dubious and continues to send unsolicited emails.

For me the best option would be the confirmation screen once I hit unsubscribe as well as an option for me to send a confirmation email to myself. That way you are giving the user the option versus just forcing the functionality on them.

Not the answer you're looking for? Browse other questions tagged email confirmation or ask your own question.

4
Is it necessary to ask users for confirmation when they remove sharing permissions?
1
At the end of an account setup process does there need to be a confirmation screen?
23
When is it appropriate to ask User confirmation?
4
Should I save mail list subscription information for users who unsubscribe?
5
What would work better in order to get feedback upon unsubscribing from newsletter?
18
What should a e-mail address confirmation e-mail say?
2
When email confirming an account, should I send another one after confirmation?
1
E-mail notification to non-registered users - best practices?
0
When is inline confirmation necessary and when is it not?
3
Is there a mail sent confirmation standard?