In About Face 3 Alan Cooper encourages to design for the intermediate user (instead of the beginner or expert). This is due to the fact that users start to pick up on cues and become adept due to regular usage.

But what if users utilize the app on an infrequent basis and when they do it's for a short duration? In my case - the usage is limited to once maybe twice a year. It's highly likely that the person won't remember the app a year later - hence a perpetual beginner.

What principles should be used when creating an app for novice users who might never interact enough with the app to become an intermediary? How would these be different compared to designing for an intermediate user?

An infrequently used application has to be as easy to use as possible. Unless you have very specific needs, innovation is undesirable. Every moment you spend making your app as obvious and familiar as possible to your users will spare them hours of frustration and avert the potential failure of the initiative your app supports.

In the early '00s I worked with a team which inherited an intranet content management system built by an external agency who paid no attention to usability while loading the tool with functionality for every conceivable situation.

The result was technically complicated, impossible to master and filled with unused features. The outcome was that nobody who trained to use the tool could ever remember how to update their content, so they asked the intranet team to do it for them, meaning the intranet team was overloaded with content work and could never do anything tactical, let alone strategic. Meanwhile, the intranet became more and more out of date as people avoided anything that might result in them having to change any of their pages.

A lot of money had been spent on the tool, so the organisation was loathe to replace it until it was pointed out how much it was costing them to have a team of skilled contractors effectively editing documents.

One of my colleagues adapted a site he'd developed for me into a simple content management system with five fields, of which the content manager only had to complete two of them: title and body text to publish a page. When we showed an office temp how to use it and she was able to master it within fifteen minutes, we realised how important this could potentially be and when a internal rebrand coincided with the gradual rollout of the tool, the take up accelerated.

The intranet was transformed within six months as word spread about this new tool for great-looking intranet sites which was so easy to use and within two years we doubled the monthly usage of the intranet.

One of the best things you can do when designing for a "perpetual beginner" is to do user research, including user testing, during the design process. This can ensure that design elements that we intend to be intuitive, really are.

Testing your app with the proper audience is important. When selecting your test participants, you can make sure to select people who will be similar to your target audience. This can include certain ages, socioeconomic backgrounds, income levels, job functions, level of device experience, and just about anything else you can think of. No matter who you have test your app, though, they will be new to it. So, you will get to see how several true beginners will interact with your app. This will help you to understand how the design will be interacted with by the "perpetual beginner". A company I work for, Userlytics, has some great tools to help you recruit participants for a study (among many other ways to help you run a study). You can certainly screen and recruit participants on your own, instead, but depending on your situation this might be helpful to you.

You also might want to consider rapid iterative testing, where you can make changes to your app as you find ways to improve it. Another way could be a series of tests where you first test app version 1, then phase 2 of the study will test app version 2, which you've made changes to based on the results of phase 1 of the study. Note: I would not re-use any participants for this kind of 2-phase study, as you want fresh eyes each time.

I hope this helps!

I would recommend piggy backing off conventions that the user already knows. Suppose this is an iOS app. An iOS user will be familiar with iOS standards interface controls. As long as your app behaves in the same consistent manner as outlined in Apple's human interface guidelines, users will feel confident that they know how to use your app despite not using it regularly.

You may run into situations in which there is no conventional interface to achieve a more complex task. If you have a perpetual beginner user, then you probably want to make the steps very obvious even if it adds more steps in the process. The users are only going to go through this process once in a while, so clarify is way more important than speed. Shortcuts are likely not needed or even desired.

For an app that receive regular usage, you have a bit more leeway in designing custom controls for the more complex user flows. Shortcuts become more useful. It'll probably be a good idea to introduce new features/changes using a "tour-like" flow. I'm sure you've seen it on Google, Facebook etc. 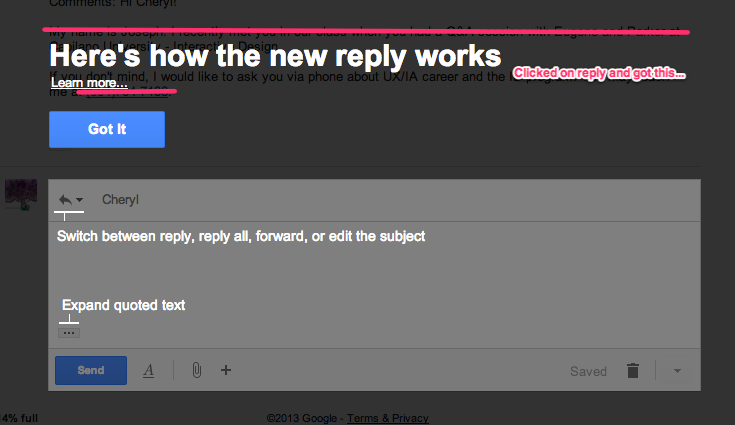 There's probably not much need for this sort of feature if your app doesn't get regular usage since everything will be new to the user.

I think for this category of problem, "beginner" and "intermediate" doesn't really come into it. The goal is to let an unengaged user get through their task as quickly as possible, with as little mental energy as possible. Picture someone watching TV with a laptop on their knee.

Not the answer you're looking for? Browse other questions tagged interaction-design design-patterns or ask your own question.