How to represent that a video has no audio?

It would be useful to know that a video (played on a web page) has no audio before starting to watch it.

What could be a good way to indicate this?

For example, this recent video on the BBC website: 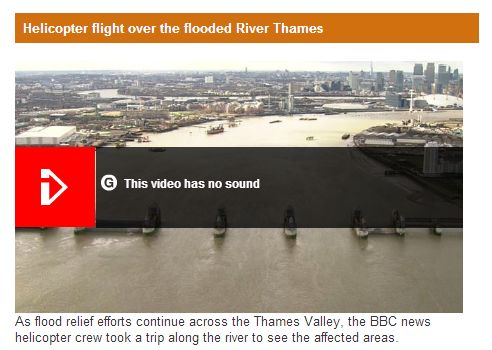 In addition, where there may be sound but no voice-over, and the user might be expecting it, your message would be 'There is no commentary on this video'.

This example of messaging after the first click covers many (most?) situations where users expect sound with a video, but obviously there are some instances where that may not be the case. It depends very much on the context of the website on which the video is located.

In some environments, most users may not be expecting sound, so for those videos that do the message could simply indicate the opposite to the example above - i.e. that there is sound on the video - and the user clicks to accept and continue playing. Note this is still catering for exceptions rather than the rule.

In contexts where there is no expectation one way or the other, I suppose you could overlay the message before interaction, but more discreetly than the example above so as not to cover the view. However, you would have to be very consistent about doing it for all those videos with or without sound. I still don't like that idea!

I can't stress enough that messaging before the first click would have to be done with very different intentions than the BBC example indicated above where the message comes after first click.

Messaging before helps those users who don't want any sound. Messaging after helps those who may be surprised by the absence of sound and think something is wrong, or it helps those who aren't expecting sound even though that is not something that necessarily prevents them viewing.

On a website that has a high number of visitors, it is highly recommended to A/B test a few different methods and different placements of the message. If your website is all about video consumption then you really don't want to be adding messaging (clutter) everywhere that may prevent views, and really you should be adding messaging in the minority of cases, to cover the abnormal or unexpected situations.

By the way I'm not sure it's valid to try and provide an inclusive design for those who specifically don't want sound because they're on a boring phone call and only want to watch videos with no sound!

Not the answer you're looking for? Browse other questions tagged accessibility web video or ask your own question.

30
Video and audio autoplay - evidence that it's bad practice
6
Can I eliminate volume from my custom html5 video controls?
4
Where to put video transcripts?
2
Demonstrating that Audio and Video can't play at the same time?
5
Volume control on the media player
1
video player mobile - a way to represent two different sources
3
How to let mobile users know that an embedded YouTube video is loading slowly
10
Why does every website seem to use max volume level for sound?
2
Video controls on full screen landing page video
2
Video play button on overlay images