Why are alert/confirm dialogs bad for mobile web?

I'm currently working on a mobile web app with external designers, but we (the developers) are allowed some input. They keep wanting to add alert and confirmation dialogs for things like form validation, signing out, deleting things, etc, which raises UX red flags for me - they just seem wrong on mobile web apps for some reason and I can't pinpoint exactly why.

Worse, they keep asking for things that alert() and confirm() can't do, like using "Delete/Cancel" or "Yes/No" instead of the default "OK/Cancel", or disabling the "Prevent this webpage from creating additional dialog" checkbox that appears on modern browsers. The only way to do this, of course, is to create custom dialogs, which raises even more red flags.

Is there any research or authoritative articles on why this is bad? Or am I just going crazy?

Take a look at this UX/Design guideline from Google about Confirming and Acknowledging:

Although the guideline is for mobile applications, the principle and flowchart highlighted in the guideline can help you and your team decide when and when not to use alerts and confirm dialog.

Generally you should look at the use of confirmation dialogs as a last resort. They break the flow of the task for users that understand the system. The dialogs are often confused by users or not read at all. First decide if something significant will happen. If so, determine if undo function can be developed.

You are specifically asking about bad for mobile web, and most of the answers don't seem to touch on that (they tend to argue whether or not pop-ups are inherently bad, and mostly suggest the same argument applies to mobile or desktop1).

For me, the biggest problem with pop-up alerts or confirmations on a mobile is when they don't (or can't because of space) show enough context about what they are asking to let the user answer the question from the pop-up alone.

To some extent, this is true on both desktops and mobiles. However, the problem is magnified greatly on a mobile:

For simple cases, the solution is to include enough context in the dialog to let the user make the decision. For instance, Google's notes on confirmations linked in another answer indirectly touch on this, but don't really draw attention to it. Their final dialog includes the title about to be deleted: 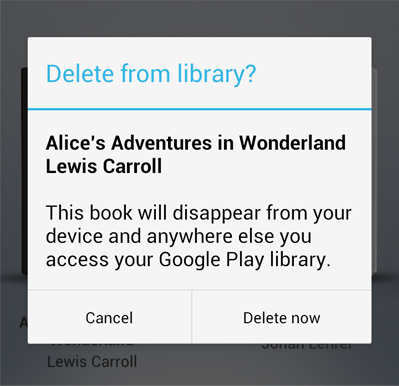 This contains enough information to not need to see the underlying screen.

The problem comes when there isn't enough space to summarise the action being confirmed. For instance, if instead of just the one book, the user had selected 12 books to be deleted. A dialog on a mobile is unlikely to be able to list all titles in a readable way, so will probably have to settle for "Do you really want to delete the 12 selected titles". Including the count of titles will allow the user to recognise the severity of the action: if they are not 100% sure (or thought they were only deleting two items), they can at least cancel and review the main screen.

It is at this point that it may be better to find alternatives to pop-up confirmations (e.g. making sure that such deletions are reversible).

I don't think alert/confirm dialogs are bad, in mobile web or other contexts. When the user has to confirm an important operation, like deleting something, he will be pleased to have the opportunity to cancel this operation. But when you speak about form validation or signing out it's odd to ask confirmation for these things. Is signing out permanent? Can I simply log in again if I clicked on the link by error?

So I have no source to answer your question but I think you can ask yourself: who loves confirm dialog? Nobody, confirm dialogs are just distracting you or your users from doing real things. But when you need to ask user confirmation, they are the perfect solution.

Not the answer you're looking for? Browse other questions tagged mobile mobile-web html5 modal-windows or ask your own question.

8
Designing for mobile web browsers
3
Pixel aspect ratio for multiple touch devices- Mobile Web
7
"Click-and-drop" alternative to drag-and-drop, for accessibility (and maybe mobile-web)
7
Why is it ok that apps don't respond to device orientation but webpages are expected to?
0
Mobile app: What text in load dialogs?
2
Are expanding divs a bad idea for a mobile portfolio?
1
Modal Dialog action leading to another Modal dialog - Mobile web
5
Why do web sites check for mobile devices but not for desktop?
1
Modal dialogs on mobile - Back button