Two options, how to softly steer people in the preferred one

When you want to softly steer people into an option, do you place the preferred button left or right to the other one?

More Details Specifically it is about registering with a Facebook account, or with a custom 'local' account. We think our product is better by providing Facebook features, but for logical reasons people are hesitant to register with their FB account. So we provide both options, with explanations.

But as you all know, a lot of people (like myself) just quickly click through dialogs without reading, just because they assume it gets them what they want. So we rather have the 'default' option the one that we think gives them the best experience.

Don't style options differently when they're variations of the same thing.

It's pushy to offer two methods for registering and then nudge the user to the one that you want the user to use; you're not letting the user decide on his/her own without your bias.

Code Maverick's example, while usable, doesn't actually apply to the original question. The Confirm and Cancel buttons do different things, and emphasizing the former is acceptable and helpful: the dialog window reasonably assumes that the user wants to follow through with the action that's triggered the dialog window in the first place.

The TC's scenario is like when a company lists its pricing packages beside each other. Usually the most expensive one isn't styled to make it stand out, even though for obvious reasons the company wants you to pick it.

When I want to steer a user into clicking one button over the other, I typically do one or more of a few things to the button I prefer them to click:

Any of these could be used on their own, but the power comes when you combine them.

I made this for another answer, but it demonstrates perfectly the power of combining all three: 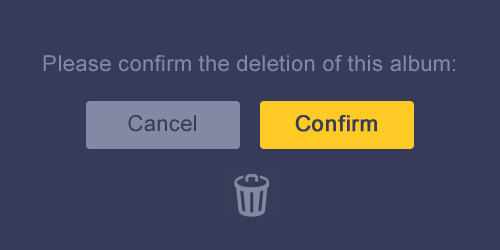 There are many options:

I think 2nd option - the best in your case. You make the button "Sign up now" and link "Signup with Facebook" below.

But sometimes you need to calm down users with "We don't post anything to your FB wall" - this is another story.

Not the answer you're looking for? Browse other questions tagged buttons many-options or ask your own question.

19
What's a better label for the traditional “Browse…” button for selecting files to upload?
8
Is there a button configuration that would imply 2 or more options to the user?
1
What's the best way to display options within options within options in an onboarding process?
3
one button, two functions?
2
How to avoid that “Path to Completion” results in “Previous” becoming the next logical action?
11
Radio buttons or Toggle switch for one out of two options?
1
How the best way to show multi-level options on tablet?
0
How to display lots of options on homepage?
1
Using different styles of buttons to enhance the “accept” button over the “cancel” one is a good idea?