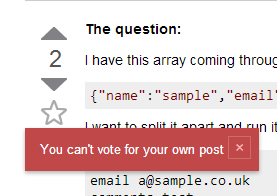 132
Why are vote buttons on Stack Exchange shown when they can't be used?
16
Should we avoid negative words when writing error messages?
9
Is it appropriate to rely on accidental discovery for non-vital or less commonly used UI features?
6
Should we fake succesful form submit, display result and then revert if some conditions are not met?

12
User suggestions in electronic dictionary
1
What to use as a textual link to a page showing a list of available languages?
3
How to display languages in a complex social media similar url structure?
3
From UX point of view, what is the rationale behind using location of device to select web-site language instead of device's language settings?
4
Countries vs. Languages - changes in phases
2
Communicating lack of interaction
5
How to tell users that s/he might be adding a duplicate record
2
If current language option doesn't need to show, how to display a language selector?