I've been requested to design a dark interface which spreads a little light as possible. I'm interested in academic studies / researches about white text on black background.

Is it really tough to the eye or a myth? is it really less readable than black on white?

In all the researches I've found (see below) it was inconclusive, and in some it was rated by users almost as high as black on white.

In the 74 times cited study Readability Of Websites With Various Foreground/Background Color Combinations, Font Types And Word Styles there is limited to no evidence that black text on White background is have higher redability than white text on black background: 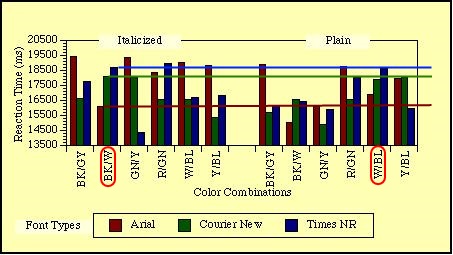 On can see that Times New Roman is equal, Courier New slightly faster and Arial slightly slower on white on black color combination. So there's no scientific proof of that one is better than the other, and is probably a personal preference more than anything else.

There are also a number of ebook reader apps which lets users decide which color scheme to use. Personally I prefer black on white during the day, and white on black during the night {to avoid waking up my whife :-)}

On the notion of italicized text vs plain text, the author says

However, Black on white wasn't the fastest combination:

So it's fair to conclude that it is still dependent on the individual users preference, with her reading ability, possible glasses or the need for correction. Other factors may be age and how well trained the user is for reading on screen. From the looks of it - there is no evidence of one over the other, at least not in this study.

While I personally find the "black on white" preferable in a well lit room, I find "white on black" less stressful in a dimly lit room. However, the readability of a UI with "white on black" without adequate "white space" or in this case "black space" is quite poor.

So there are other factors such as environment lighting, UI element spacing, content alignment, containment, font weight and style, user engagement time that can make one preferable over the other.

3
Readability issues and presentation of Price
11
Any usability studies of the readability of Open Sans?
2
Website readability vs performance vs experience
7
Studies about how many lines from a testimonial a user will read on home page
4
Idea to enhance the UX and the legibility of an internship report
62
Does the Oxford Comma increase readability?
2
Museo Sans readability for desktop
0
Looking for Friendly Documentation on Color Contrast and Readability
3
Looking for research regarding pure black vs dark gray for readability
4
Statistics (or tools) on screen calibration & readability