Apart from safety, has there been any research conducted, hopefully current, with respect to user-experience and right- vs left-hand traffic?

The terms right-hand traffic and left-hand traffic refer to regulations requiring all bidirectional traffic, unless otherwise directed, to keep either to the right or the left side of the road, respectively. This is so fundamental to traffic flow that it is sometimes referred to as the rule of the road. This basic rule improves traffic flow and reduces the risk of head-on collisions. 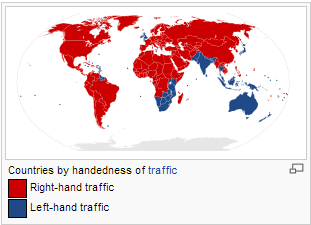 Vehicles are usually manufactured in left-hand drive (LHD) and right-hand drive (RHD) configurations, referring to the placement of the driving seat and controls within the vehicle.

As most would agree, safety is, and should be, the most important aspect when any discussion comes up pertaining to right- vs left-hand traffic. However, what I want to know is:

Apart from safety, has there been any research conducted, hopefully current, with respect to user-experience and right- vs left-hand traffic?

To further clarify, apart from safety means research based on the user experiences of having to subscribe to the LHT/RHD and RHT/LHD regulations. It seems to cater to people who are right-handed and right-eye dominant.

All information and images were taken from Wikipedia.

This is a very interesting question, and really difficult to answer at the same time. I have tried to interpret the "experience of driving" from different angles. Hopefully one will apply to your use-case. I list the papers, and describe why I chose them. I could not find freely available papers in all the cases, unfortunately.

As a baseline of existing human factors research concerning driver experience, I found this excellent chapter that is specifically geared towards fixation (eye-tracking). I am not an expert in the field, but I would hazard a guess that a lot of these findings would apply to both LHD and RHD scenarios. It is really interesting reading (30 pages or so). Some of the questions that they ask (and answer), include:

Then I thought about how being right-handed, or being trained to drive on the right side of the road may affect navigation inside and outside the car (e.g. while walking). It turns out that there are a lot of right-hand/left-hand studies that ask similar questions.

Right-Handers and Americans Favor Turning to the Right (2002) (Abstract)

We tested a finding by E. S. Robinson (1933) that people have a bias to turn right upon entering a building. We hypothesized that this bias is attributable to learning derived from traffic rules that specify driving on the right side of the road and that it also could be related to handedness. We tested participants in both the United States and England in a simple "T-maze" task in order to compare their directional preference. Handedness was the best predictor of participants' directional preference. However, U.S. participants also were statistically more likely to turn right than were English participants. The preference to turn right was not found to be significantly related to eye dominance or reading direction of the primary written language of the participant, although in the case of reading direction, the sample size of right-to-left readers was too small to be conclusive. The findings support that walking direction preference is an additive function of both learned driving patterns and genetic handedness. These findings have practical implications for the design of public spaces such as schools, businesses, and urban centers.

There are some interesting related studies on where people choose seats in movie theaters based on handedness, and also on airplanes that you could look into for a broader context.

Then I stumbled on two scenarios that could help, but are more related to safety studies. The first, considers situations where right-hand-drive vehicles are operated in left-hand-drive environments, and the impact on the driver's ability (measured through number of accidents)

The concern with these vehicles is two-fold: first, does the RHD configuration lead to increased risk of crash involvement; and second, are these vehicles inferior in comparison to built-for-Canada vehicles of a similar age, with respect to occupant protection potential?

In this study three separate methodologies were utilized in approaching these concerns: a relative crash culpability analysis where RHD and left-hand-drive (LHD) crash rates were compared for the same group of drivers; a survival analysis where time-to-first-crash was compared between RHD and LHD drivers: and a multiple regression model where RHD vehicle driver risk was compared to that of a similarly constituted comparison group of LHD vehicle drivers.

The results of all three analyses were consistent. RHD vehicles had a significantly greater risk of at-fault crash involvement over that of similar LHD vehicles. However, crashes involving RHD vehicles were no more severe than those involving LHD vehicles only.

The second scenario involved designing guidance systems for drivers who normally drive on the right side, but visit Japan (where the law requires driving on the left). Again, I find that the "switching" of sides is more interesting than picking either one side above another.

A country can adopt one of two standards for traffic flow — cars may travel on the left or right side of the road. When drivers who are accustomed to driving on the right side of the road drive on the left side, and vice versa, the mental workload is likely increased due to the driver’s unfamiliarity with a new language, the position of the driver’s seat, different driving directions, and other factors that differ from those of their home country. One method of doing this is to make sure that the in-vehicle route guidance information (RGI) is not overly complicated — thereby assisting drivers in improving their safety. Consequently, the aim of this study was to facilitate mobility and improve safety for natural right-side drivers driving temporarily in left-side traffic. In this study, driver behavior and workload — given various types of RGI — were evaluated in a driving simulator with a variety of prescribable test conditions. This research was composed of two experiments. In the first, various types of in-vehicle route guidance systems were tested and evaluated in terms of their characteristics and associated driver behaviors (while driving). In the second experiment, systemic factors and effectiveness were evaluated by two combined systems, arrow and map-type information, based on the results of the first experiment. In light of both experiments, the various types of route guidance systems were discussed in terms of their results. A navigation system was proposed to alleviate some of the secondary tasks such as route selection.

There is some other really interesting research concerning navigation and route planning, and how people interpret maps and are biased in selecting routes based on their perception of north and south, but I guess that falls well outside your original question. Still, I couldn't help but wonder how it relates to our handedness and driving position in some subconscious way.

The only reference to traffic challenges with regards to right hand drive I found in a research study was this study done by Canadian researchers which shows that making a left hand turn on a country in which traffic flows on the right hand side is much more challenging and dangerous. To quote the article

Insurance and crash statistics show that left hand turns at busy intersections are where the most serious crashes occur. “They must be appreciably different in some way than just driving straight in the country,” Schweizer said.

Intuitively, it makes sense. “But, we still don’t understand, would it be completely different brain areas? Would it be a different collection of brain areas that are recruited when doing this? We had no idea.”

The study, which included collaborators from Sunnybrook Health Sciences Centre and Baycrest in Toronto, involved 16 healthy volunteers; men and women aged 20 to 30, with seven years of driving experience, on average. The team looked at the brain areas activated when driving straight, versus making simple right turns, or left turns with or without oncoming traffic.

They found that making a left-hand turn in traffic lights up a “huge” network in the brain “that was well over and above anything we saw with straight driving or even turning right,” Schweizer said. Specifically, they saw dramatically increased activity in brain regions involved in visual processing, spatial navigation and motor coordination.

“Think about it,” Schweizer says. “You’re in a busy intersection. You have to look at your own traffic light, to make sure you don’t turn on a red, and you have to look at the oncoming traffic to time your manoeuvre so you don’t get T-boned.” Drivers also have to watch for pedestrians crossing in front of them on the walkway, from the left and the right.

A right-hand turn is not nearly so demanding. “You have that oncoming traffic on the left, but you don’t have to co-ordinate as much,” Schweizer said. 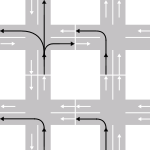 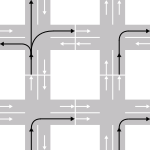 First, we observed that the patterns of brain activation depend on the type of simulated driving task. Performing right turns, the simplest task, generated minimal activation relative to the control condition (Figure 3A). Making left turns, without oncoming traffic, the participants showed activations in the posterior brain, including visual-parietal and motor areas (Figure 3B), suggesting that cognitive resources involving visuospatial and motor coordination are required for making left turns. Performing the more demanding left turns at busy intersections, where in the real world most serious crashes occur (National Highway Traffic Safety Administration, 2009; Choi, 2010), produced larger activations in the posterior network, along with additional activation of the cingulate cortex, an area important for cognitive-response selection and alertness (Vogt et al., 2004)

All of this said, I would agree this answer is incomplete as I could not find any study which checked and saw if making right hand turns while driving on the left hand side of the road is equally dangerous or not

Please note the below image has been clipped to to show only the relevant content. To see the full image please go to the link mentioned above

Going by the above example, it seems like left hand traffic is safer than right hand traffic. However I would not consider this as a scientific analysis and deeper research should be done.

Not the answer you're looking for? Browse other questions tagged user-research research usability-study or ask your own question.