Should US State be a dropdown or text field

For address entry forms, should "State" be a text field or a dropdown? Personally, I find a 2-character text field to be much faster to fill out than selecting from a dropdown. However, the majority of forms that I come across use a dropdown (some showing full state names and others just showing the abbreviation).

Is there some reason why a dropdown would be preferred or is it just a matter of convention?

I would argue that a good number of people think of the two-letter abbreviation when they think of their state(s). A form that accounts for both short and long-form manual input and a traditional drop-down list would be ideal in my mind. I'm imagining something like a standard text field that validates on either the abbreviation or the full name, and if there's a typo, the field gets an error state and a traditional dropdown list. The dropdown list is always available for the users that prefer to use the mouse. 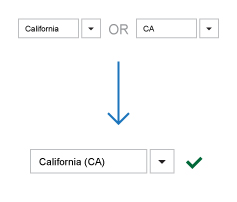 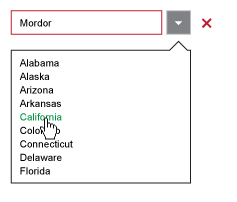 Use a text box, then validate the input.

I'm a developer at SmartyStreets, where we deal with this issue a lot. Dropdowns are notorious for slowing down users because they're hard to navigate with the keyboard. For example, some state dropdowns use "NV - Nevada", others just "Nevada", and some just "NV" -- in any case, it's hard for users to predict what to type. You mentioned this inconsistency yourself. So, users frequently use the mouse, destroying their form-filling groove.

Not only that, but a dropdown with 50+ states in its list is hard to read. The user will spend more time scrolling and have more eye movement than if they can just type their state as "Nevada" or "NV" or whatever they want.

Now, about validating: ensuring that the user typed a valid state is pretty easy since there are just 50 options, and there are several dozen implementations around the web which are ready-to-go. But few truly lend themselves to a good user experience: you'll have to "shop" around and be the judge of that. If the user is typing their address, make sure you validate the address. Here's a jQuery plugin which can be used for free that makes this quite trivial (but see the previous link: dropdowns can be problematic).

As part of my personal vendetta against improper use of dropdown menus, I have a personal mission at work to not only standardize addresses, but also address forms. Again, I'm taking liberty to assume that you're asking about forms which collect not only state names (few do), but in the end, I believe all address forms can be consolidated to just 1 field (see the jQuery plugin linked to above, which supports parsing and validating freeform inputs). Using a single text box or text area makes the whole process smoother and totally normalized: a user can type their input any way they want, and since the input is being validated, using the form no longer becomes a stopper.

For further reading, see my article on my website about the jQuery plugin which, about half-way down, has a pretty thorough rant against dropdowns in address fields (which I mostly just re-typed here; oh well).

I'm rambling now. But you get the idea.

I don't know many "normal" users who navigate forms using their keyboard. Most people I know use their mouse (from interacting with/helping people I work with), and a drop-down/select fits this use case. I personally tend to use my keyboard to tab to the select and then type "C" 3 times to get to "Connecticut". The only problem I see with a text field is that a good number of people may not know the two-letter abbreviation for the State (they're not always selecting the state in which the live, depending on the form), and typing the wrong abbreviation and then submitting the form only to receive a "invalid state" message would slow them down even more. A select limits the choices for the user, and thus prevents errors in validation.

Think about this instead, is it really necessary in the first place? If someone knows their name, street address, city and zip code, I think it highly unlikely they need to break rhythm to find the name of their state, or the 'code' for it.

Not the answer you're looking for? Browse other questions tagged forms addresses or ask your own question.

6
How to create the best form asking buyers for their delivery address?
4
Positioning of additional form entry fields to avoid natural flow of entry
3
Designing a “create” UI for a complex “object” in a system
154
What is best practice for designing form error messages?
9
Can I reformat personal names obtained from a single form field?
0
Helptext area vs Help “Tool Tip” icons on click
2
When should a system partly fill in a form for a user?
2
Hardware best practices for data entry while doing field work
1
Should nationalities in an input be listed in country name or adjective form?
0
Should I ask the user for their company name or email address as an additional source of validation?