Show approximate time to complete on a form?

Today, I'm dealing with forms of all kinds. There are small ones, large ones and then ones capable of making a user cry. It is necessary evil - because it is an application that collects a user's information for his visa/citizenship application.

My concern is, the user might get frustrated, because it looks long with many empty text-fields to fill up, but in reality - it doesn't take much time to complete. So I wanted to display an approximate time taken to fill it on top (given the user has pre-required documents). The fields are auto saved upon each edit. 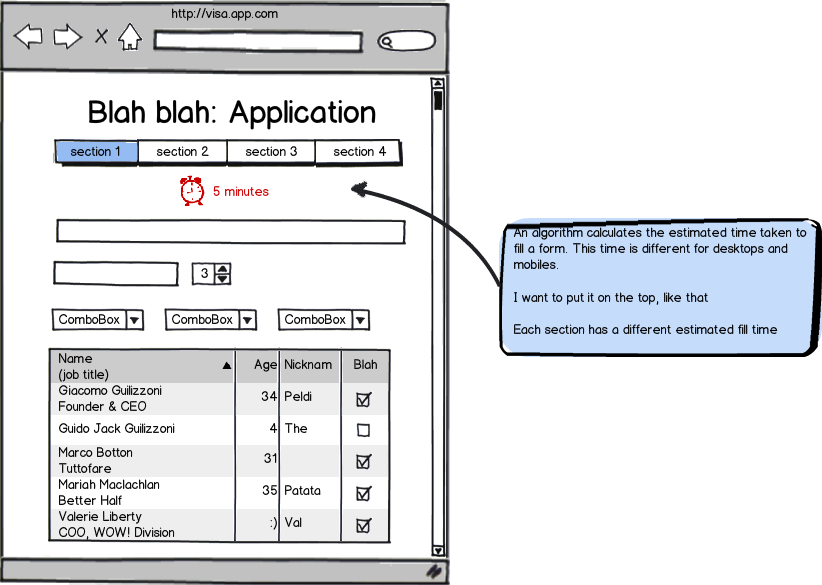 Any recommendations / improvements / suggestions? I did some diligent googling for similar patterns, no bueno. The only intention here is to inform the user "hey it looks like a tedious task, but trust me - it would only take you X ~ Y minutes to fill".

It's very common on surveys to give some idea of a typical time that it may take for it to be filled out. After all, surveys can take quite some time and you can't typically gauge how much there is to do.

You don't want to give users an opportunity to feel stupid. Because, if you say it takes 3 mins to fill out and it takes someone 10 mins - that's how they're going to feel.

So make sure to word it very carefully!

Personally I don't think it's going to give great results by auto calculating the expected time.

You want real data from real people. Perhaps you can gauge that from determining page display time and page submit time and gathering data to inform the expected time at the top (excluding outlier data)

Providing this sort of helpful information is a good way to help reduce the angst visitors feel toward an unknown/uncomfortable process.

Red in forms often indicates something is required, is wrong, or is a warning. I wouldn't use that color. Instead, Blue is a cool color often used for information and notes in interfaces.

An alarm clock may indicate to a user that you're instead presenting them with a time limit. Instead, I would recommend forgoing icons, and instead just use friendly, direct language to communicate the information to the user.

Also, instead of a single time, I would provide + & -2 standard deviations from the mean you find with your collected statistics. This will cover 95% of your users. You can do this real-time or could cache a time daily, and determine the average by weighting more recent responses higher to reflect changes you may make in the UI/UX.

To note, +/- 3 standard deviations (or more) covers almost all (99.7% or more) users, but because of the effect of trailing edges on either side of that curve, you'll likely end up providing a maximum so high that it may be practically meaningless, discourage users from starting, or not provide the necessary feedback indicator that a user should seek help (if they see that they've spent much more time than average).

Based on an average of past users' experiences, this form should take between [-2sd] and [+2sd] minutes to complete.

Not the answer you're looking for? Browse other questions tagged forms user-behavior information-architecture or ask your own question.

6
Form - time input
1
Show mapped input in form
3
Search auto complete / suggestions usage
4
How to show remaining time?
0
What term to use to show / hide pre-filled fields in a form?
6
Placement for next, prev and complete form later actions
54
Can a form be too easy to complete?
1
Are users reluctant to give their complete date of birth?