This is in relation to a desktop app. What is the most meaningful term to use?

If you are developing a Windows application, the correct term to use is "Exit". This is spelt out in Microsoft's Design apps for the Windows desktop guide, under the "Standard Menu Bars" section.

If you are developing a Mac application, the correct term to use is "Quit". (Your menu item must read "Quit AppName".) This is spelt out in Apple's OS X Human Interface Guidelines, under "The App Menu" section.

In general, you should follow the platform's user-interface guidelines when you are developing apps so that your app is consistent with all other apps in the same platform, so as to reduce your app's complexity and learning curve for your customers.

The following table summarises the conventional terms, which are platform dependent.

On Windows, you run an application, then exit it. Ditto for Unix command line tools. However, both old documentation and pretty much all windows 8 documentation uses Open/Close.

On a Mac (which deep inside is Unix-based) you open an application, but then quit it.

You close a window or a tab (both you can also open).

Consider the following when deciding on a term to use:

I don't know if your user base is international but I guess it is of varying levels of English and varying levels of IT skills. Exit is universal for leave, quit and go away (remember not everyone thinks like us geeks!)

The grandma who has just got her first laptop

I want this to go away ... quit [negative connotations, implies it is final, sometimes forever]

I want this to go away ... exit [can be related to in real life]

The person who speaks enough English to get by

I want this to go away ... leave [localised terminology, can also mean "to leave something in a room" - confusing to those not fluent in the context]

I am sure there are more examples I could bore you with but I guess you get the gist. Just think about it this way, what sign did you see driving down the highway?

Also this is a screenshot of a random selection of windows I have open - don't reinvent the wheel :) 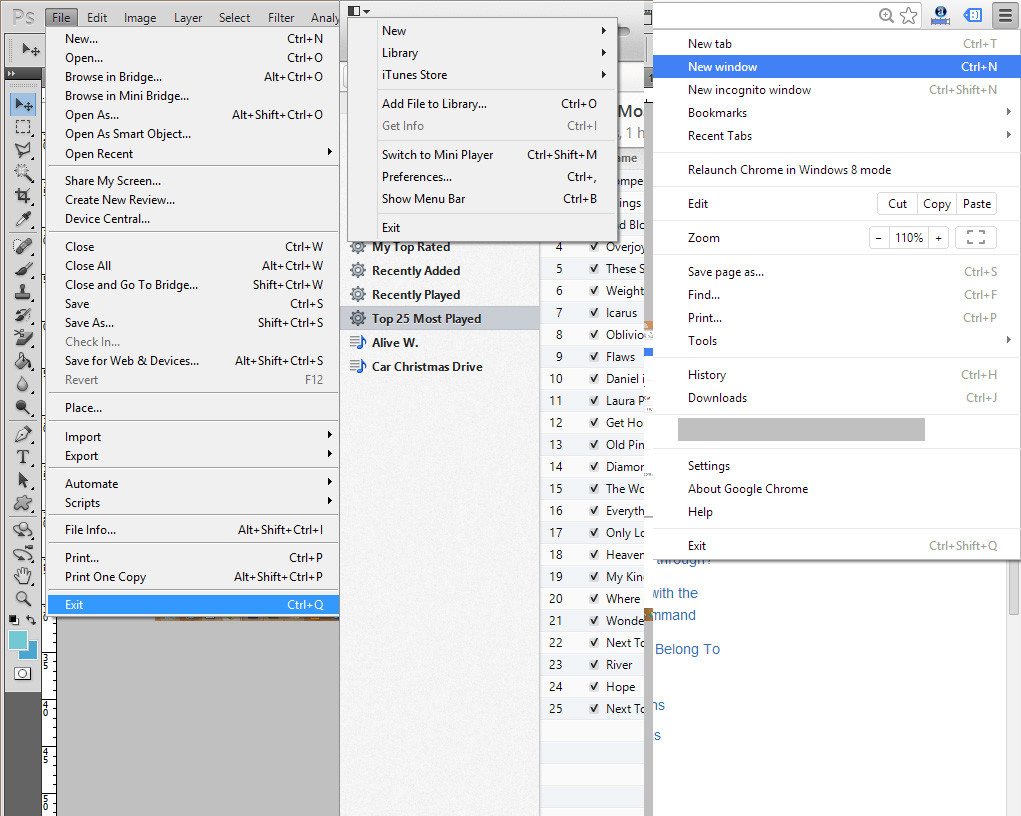 Update for Mac Users: I would say firstly go with what is right for the platform, but if it is a web app where that is not an option say I would also apply this example

Since nobody has mentioned it:

Depending on your application you might have need for two terms. For example in chrome I can close the whole window, but I can also close just a tab. Same with Photoshop, my code editor, and a bunch of other UIs. Having the same term for two different things is confusing (imagine if there was just one word for open and close). For this reason there can be a valid use case for having two terms.

That could have been "Close tab" and "Close chrome", but better to keep distinct actions distinctive.

Aside from this above note to consider I recommend going with system defaults - it's a backbone principle of UI design as covered in Neilsen's Heuristics: Consistency and standards as others answers note. However: if possible have 'matching terms', e.g. enter matches exit, open matches close.

Personally I think exit is wrong for referring to an action you - the user - start.

In my opinion, the 'Quit' action sounds more forceful, so it can be used to close an application which has failed to load or complete an action. It suggests the user wants the application to stop immediately. (For example, "Force Quit" on Mac OSX.) In contrast, the 'Exit' action sounds more gentle, so it can be used to stop an application after it has fully loaded. 'Exit' may prompt the user to save data, whereas 'Quit' will lose unsaved data.

However, as the accepted answer says, you should follow the UI guidelines for the relevant OS, to give the user a consistent experience.

For an application, I would say that "Quit" is the most accurate and the user is most likely to understand this the best. It sounds more final, as if you are not planning on reopening the app in the current session.

"Close" feels more like you're hiding/removing a window, tab, or other widget/UI element. If you're talking about a mobile app, "close" gives the impression that you can reopen it again without relaunching the app, as if it is running in the background.

I can't think off the top of my head what use-case "Exit" is best suited for.

This is all from personal experience, but I would like to see it reinforced by a study.

Here's a posting from a mailing list, which I'm glad to see reiterates very closely what I've said above. https://mail.gnome.org/archives/usability/2004-April/msg00092.html

'Close' is the best answer since we open an application

We do not enter an application or start a process when we refer to working on an application, where we could have used exit or quit respectively

It depends on the impression you like a user to have when using your application.

If you want people to think someting like they are in a game or on the Internet then you should let them exit those places.

If people should simply use your application, you should let them quit using it.

Although exit is frequently used I do think that Close is a better choice.

Most applications are created to make procedures easier and faster to perform. Lets say I have to write a paper. Instead of a notepad and a pen I will use MS Word.

Normally I would open my notepad and get a clean page but now I open a new document. When Im done writing I close my notepad, now I close my document.

The word you use really depends on how you describe other functionality of your application. if you have a MDI (Multiple Document Interface) application Exit would be the correct word since you already open many other windows in your application which are closed

With a SDI (Single Document Interface)application, such as Word I think Close would be a better choice, I can hear you say it, But you can open several documents at once. True.. However each document is opened in a seperate window.

Then the third option, Quit.. I think that really depends on what kind of application youre making. If its a game I think this will be a logical choice, other than that I dont see reason to use it.

Just my two cents on how I imagine the differences:

Exit - To press the x, alt+f4/ctrl q, or use the menu drop down to choose exit Close - To use taskmanager/similar program to terminate the application Quit - To leave the computer in frustration and never open the application again/uninstall it.

Not the answer you're looking for? Browse other questions tagged terminology text or ask your own question.

3
I have a link that lets the user add, delete, modify elements. What should I call this link?
5
Do we "open" or "launch" or "start"apps?

1
How do i call my buttons to return to a previous screen
1
Wording for an application/sub-system that allows editing user profile pages
0
How to differentiate between "software" and "application" in the context of a company's products and services?
2
What is the most appropriate term discontinuing records in an application?
0
How to describe maximum terms in a simple math application
0
What to name to the "body" of a software application
5
Do we "open" or "launch" or "start"apps?
4
Are desktop applications called “apps” yet?
3
What do you call QA testing on UI?
3
What term best describes focus on a low barrier to entry for an application?