When to use roles vs personas?

I am working on an web based application that is accessible by a small group of clients and their employees. I have been reading a lot about the development of personas but I'm not sure that that is really the correct technique to use in this situation. The roles of these users all fall into a very narrow technical field.

It is still worth developing a persona in your case, although it is likely you will only have one.

Personas are used during the design process so designers constantly have a character representing the target audience in front of them. This (hopefully) ensures that the user is always kept in mind, and that designers don't make any decisions or evaluations that are based purely on their expertise of the domain (ie, the designer sin).

Personas help the designer to step outside their own mind and enter someone else's.

Even one user is enough

It goes even further than that - one of the key recommendation in writing guides is to always consider the reader - novice writers tend to write to themselves. Even if you have a single reader (like a marker of an essay you write) you should write for that person and not for yourself.

As far as personas go, you would have no synthesis (development) to do if you only have one user, but it would still pay to create a persona for that one person - so it is always in mind.

It's not all about diversity

Personas are not only there to represent various audience groups of interest. They also include focal points that should inform design, and other highlights of user research.

If you look at the persona below, you'll see that even if this would be the only persona for a particular system, it can still support the designer in many ways. 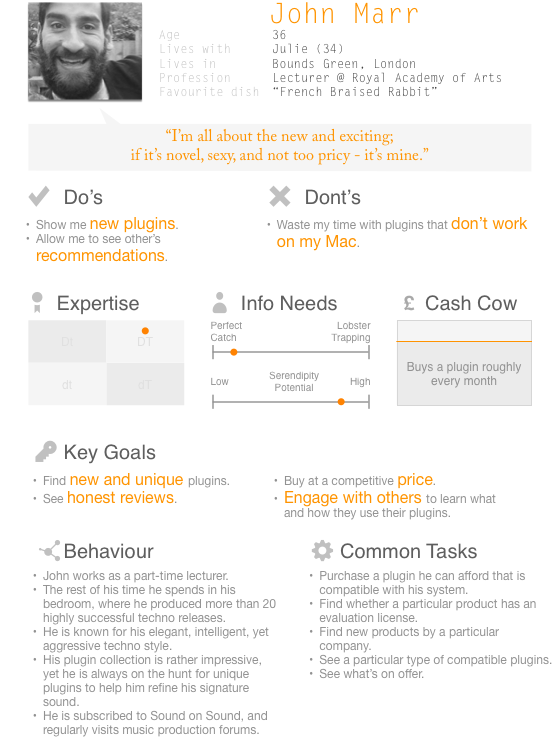 You would also be helped by doing workflows for each of the roles and then a comparison across all the roles to find the similarities and differences in uses of the platform. Your goal should be to identify differentiation in needs for input and output, and each role's purpose and goals for the interface. ie. are they just reading it, are they doing data entry... Then develop the content, language and architecture accordingly.

Not the answer you're looking for? Browse other questions tagged web-app personas roles or ask your own question.

8
When to use data driven personas and when to make them up?
2
Does anyone use different levels of personas?
12
How would you create and validate personas for something that is not a person
4
Communicating changes and new feature in my web application
9
Why create fictive personas if a real person makes a perfect archetype?
2
how to define the roles in a messaging app (ie like whatsapp)
1
Creating personas with different roles
0
User permissions and roles - allow both or just roles?
0
Is Customer Service Agent and the Customer two different personas or different roles?