We're giving this site swi-prolog.org a makeover. (The new site's what you're looking at, forgive the mess, we're under construction). The original was a 'twisty maze of tunnels' of pages that listed other pages. We're trying to get the navigation under control.

We're trying to figure out how to organize the Tutorials menu.
Originally these were scattered all over the site - some were missing, some were linked to only off obscure documentation pages, some were organized by who wrote them, etc. Some were in a 'howto' overview page linked from the home page (see it at the howto page ) In consolidating all this I eliminated the howto page and either distributed the material to other tutorials or decided it wasn't important and eliminated it.

In further discussion with the head dev, he argued (rightly) that the material was indeed important, and further, that having an overview page like this was particularly useful, since the website's wikified and we'd like to encourage users to add their own tutorials.

So, now we're wondering how to organize all this. Adding 'More tutorials' to the tutorials menu seems wrong, since it encourages users to look under tutorials, not see what they want in a list, and assume it's not there, but I'm not sure what else to do.

There's a couple of items under 'documentation' that seem to be lurking suspiciously about the margins of this as well.

Forgive our cluelessness - we're a bunch of logic programmers, not UX pro's (volunteers would be vastly welcome 8cD )

One of my favorite documentation/tutorial pages is that of Laravel. They start with a quick start page, which gives you the basics. If you know what you are doing, no need to move on past there. In the majority case that you don't, they outline the tutorials and documentation on the left side, with a clear order to go through them. Additionally, as you open each tutorial, there are clear links to get to certain sections of the tutorial, if you are just looking for one piece.

If I understand you correctly, their "Preface" = your "How to", "Getting Started" = your "Beginner", "Learning More" = "Intermediate", etc.. 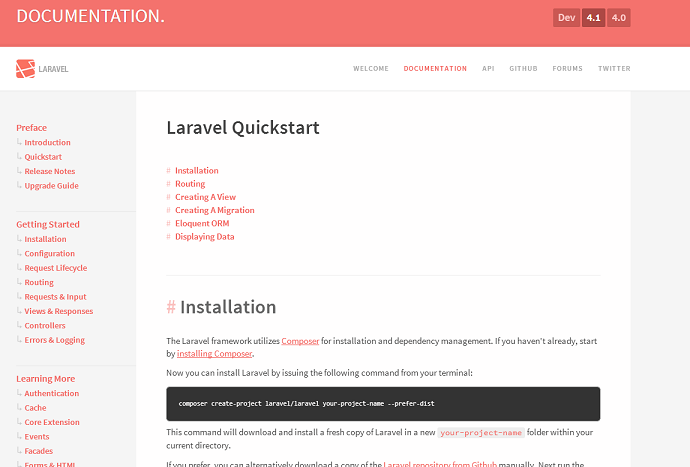 Not the answer you're looking for? Browse other questions tagged website-design menu or ask your own question.

4
Highlight most used menu items
78
Don't hide or disable menu items?
2
What is the optimum number of choices for sub menu items
2
Grouping menu items
4
What are the Best Practices for Server Side Tabs?
4
Menu with multiple checkable items
0
Menu with a lot of menu items for iPad
0
Main page VS Side menu for long flat list of items on mobile
4
Chevron Usage in Menu Items