Why don't chinese teacups have handles 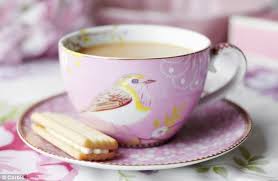 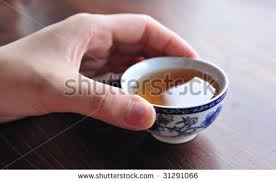 What is the reason for this difference? I am looking for answers from a user experience perspective and not from a history perspective

When the Chinese tea cup was originated, it was much easier to fashion a cup without handles. It made it much easier to stack and ship, and they were often shipped as ballast for relatively cheap. Additionally, the size of the traditional tea cup made handles impractical.

Contrary to popular belief, tea in the Orient originally was served at a much lower temperature. High temperature tea was a European custom, as it would dissolve the sugar much faster.

It was a Western custom to start putting handles on cups, and for a long time adding handles to existing cups was a business.

I can only think of one reason, but I wonder: are there any other plausible reasons?

The reason why Chinese tea cups do not have handle/"ears" is that it forces the user to hold the cup. Hence:

This is absolutely a legitimate UX question! - Albeit more on the side of industrial and human factors design as it lacks a digital user interface (which is how many people define "user experience"). Nonetheless, it's always a great design exercise to study existing artifacts and how their affordance affects the way people will perceive or use them.

East Asian style tea cups don't need to have handles - if you take a closer look, the cups are generally made of thicker material (perhaps also makes etching/carving easier), especially the bottoms of the cups. This design may insulate the hot liquid better without use or need for the teacup's saucer plate. (If you look at the thinner material versions, I think you will often find that the top of the cup will have a "lip" that opens out slightly - probably also for making it easier to hold a hot cup.)

Culturally, I believe it's also considered more polite/traditional in Asia to serve/hold the cup with both hands. Right hand holds the top edge, left hand's fingers support the bottom.

One can have a dish with a lip underneath, and hold it like this: 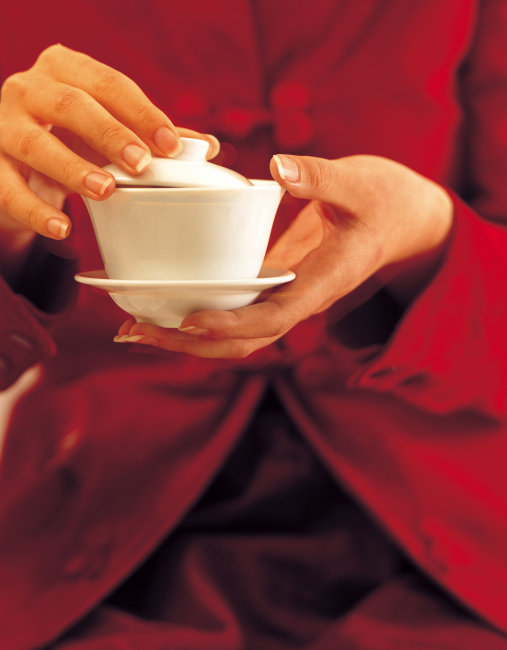 By the way, 3000 years ago chinese cup (not for tea, for alcoholic beverages only) 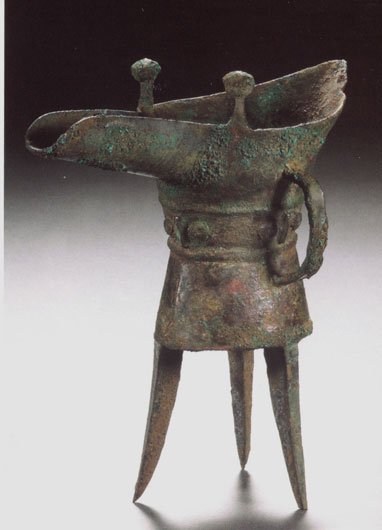 I think the the reason ,Chinese cups (the gaiwan) don't have handles due the 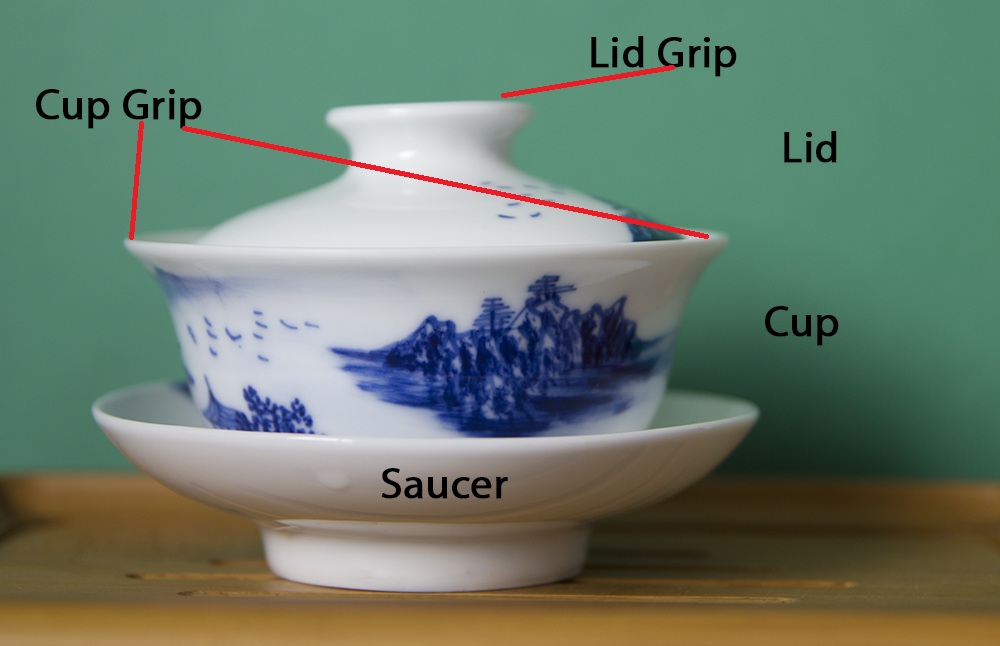 1. In China ,good etiquette dictates that tea drinkers cradle the cup with both hands and enjoy the tea’s aroma before taking a sip.about.com

2.To drink from the gaiwan, use the thumb and index finger of your left hand to hold the lid by its knob, and let the other three fingers follow the curve of the gaiwan, Tilt the lid slightly away from your lips so that it serves as a filter holding back the leaves as you drink the liquid. The cup is never removed from the saucer.etiquettescholar.com

Considering the etiquette if both hands are used to drink a tea and lid need to be on top of cup to preserve aroma and considering smaller size of cup, having handle does not make sense.

Before the age of ceramics, cups/holders was made from stone hand carving. (http://en.wikipedia.org/wiki/Chinese_jade). I think they choose to not include handle because by using hand carving you cant make precisely same handle.

After inventing ceramic procedure, they follow the old technics apperance, since it is a traditional matter.

I suggest that by refering turkish culture. There is an old song in Turkey citing "they carve cup from stone (fincanı taştan oyarlar)" . Also this is some images, inner cups have no handle but, they make outer metallic (copper) shell with handle 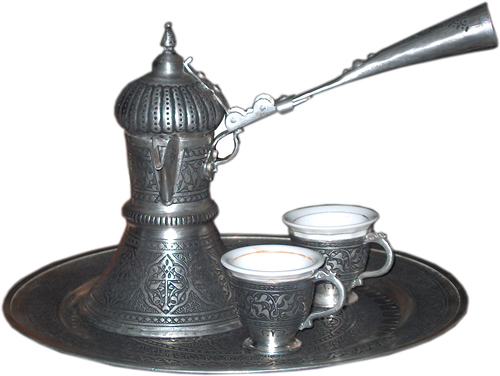 I don't hold with the view that it's not about UX.

Take me, for example. Short stubby fingers that rarely fit comfortably in/around the handle of a delicate china cup. The Chinese way would suit me down to the ground.

Plus, I think it's more refined (like the way Geisha support the tea cup by the base as well as the rim) than the dreadful (British?) custom of pointing one's pinkie finger in the air!

Taking materials into consideration.. Chinese tea cups are made out of thicker material where it doesn't conduct heat so probably design need not required any ear to it.

I'm coming from a Central Asian nomadic culture (Kazakh), north of China. We share many components of nomadic culture, including the pottery. Rounded cups have been known in the region since second half of 1000 BC. Our cups are called kese [keseh].

The ergonomic factors of kese are exhaustively defined by the nomadic tradition.

One, the shape has to allow for a compact storage.

Two, most importantly, nomadic way of living means moving around constantly. All parts of the culture are defined by this: clothes, food, even pottery. The region's climatic zone is steppe-desert, in which the soft dusty and sandy soil is prevalent. When a nomadic person makes a stop to eat, such cups, especially if the bottom is rounded, are stable if thrusted in the sand or soil. They don't fall over even on the uneven ground. If there was a handle, an effort to stabilize such a cup in the ground could break the handle or break the cup altogether. 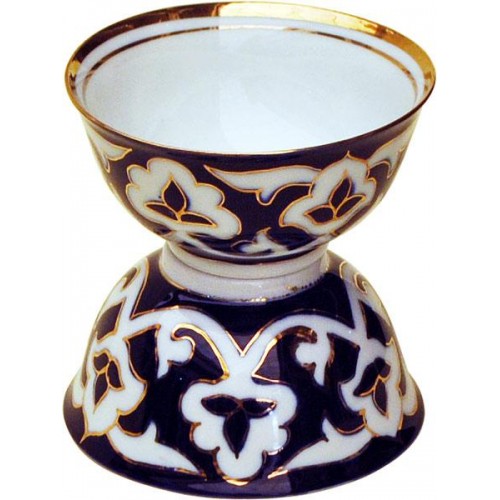 China has a tradition of ceramics since ancient times. Ceramic insulation is good heat dissipation, the cup will not need to ears (to). Europeans since ancient times the use of metal and glass to do drinking fountains, because these objects heat fast, or as a grand (no easy to slip off), so accustomed to ears. Then the Europeans in the customization of tea to China, it is required ears.

Not the answer you're looking for? Browse other questions tagged usability interaction-design physical or ask your own question.

3
Tips & resources for Mobile UX designer coming from Web UX
11
Reason for blinking laptop power light on suspend
5
How should I Redirect/Handoff users to a 3rd party site?
260
Why do washing machines have windows?
54
Why don’t we remove door handles and let doors open both ways (inwards, outwards)?
97
Why is Google using a (new) 2 step Gmail sign in process?