Why doesn't the calculator in iPhone have a backspace?

Why doesn't the calculator in iPhone have a backspace? It only has a 'AC / C' button which clears the complete entry that was made.

If a user wants to get rid of the last digit / last few digits that was entered, it's impossible. The user has to clear the complete entry and start all over again.

Apple tend to try and mimic real life behavior as much as possible in their UI.

For example, while casing is reflected on the keyboards of all OSs, in iOS, the keyboard always shows the letters as capital letters, even if the shift button is not pressed. The logic is that on the physical keyboard, the cases of the letter printed on the button do not change.

I assume the calculator follows that as most non-advanced calculators do not have a backspace button and so Apple decided to mimic that.

Because the iPhone calculator is based on the design of the Braun ET-44 which didn't have a backspace either. 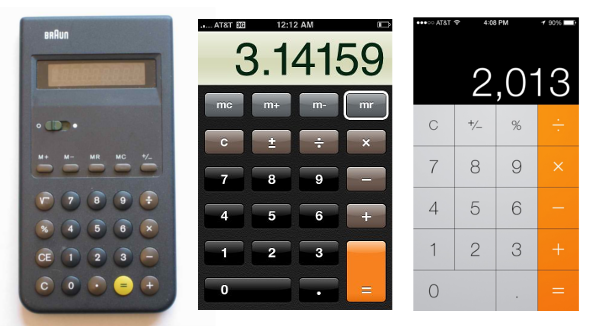 3
iPhone - Mimic the capture photo animation?
11
iPhone & Mobile Web: Pagination vs. Load more vs. Scrolling
4
How do I present massive amounts of data on the iPhone?
2
Are conditional forms good practice on the iPhone?
7
Why aren't iPhone text messages at full width?
3
Why does iOS (iPhone) flip to show the home screen when installing apps?
23
Why does the iPhone calling screen have letters under the numbers?
0
Remove or keep Clear control in mandatory input-field? (iPhone)
3
Effective implementation of filters in mobile
51
What is the proper way to inform users that their device can't be supported for a weird reason?