Should I warn that drop down filters are mandatory?

When dealing with various drop down list of options, with one acting as a filter to another and the last one being the desired option per se, it is more advisable to treat all drop downs as obligatory or just the final one used?

Let me set an example:

In the end what is really needed by the form is that the user is located at Chicago city.

If the user attempts to submit without selecting a state or a country, should it be warned that they are obligatory or just that the city it is (since the two first act as mere filters)?

In the case of city selector the better solution could be autocomplete control, which has features: 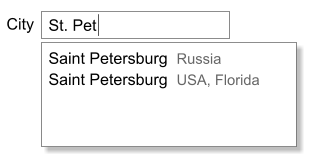 In your current interaction (select → load) it seems impossible to skip Country and State fields. Anyway, filters look like hierarchical fields, and there are no cues of skip is allowed.

City is mandatory input and it depends on State and state in turn depends on Country. So, if user submits without selecting Country or State or City and there are no defaults set to these fields, system should warn that these are obligatory.

Adding onto @Alexey's answer, I would suggest allowing users to enter the City, State or the city's Postal Code. Once a user's focus moves away from the location form field, format the location correctly or prompt the user if more information is required. For example:

In order for this to work though you'll need a pretty robust geo-data library to reference in real-time.

Not the answer you're looking for? Browse other questions tagged filter dropdown error-message drop-down-list or ask your own question.

6
Order of 'Country' and 'State' fields in Registration forms
3
Drop-Down List with two types of data? User choice of either
5
Filtering and Sorting Names and Location
5
Break up options in a drop down by scope
0
Dynamic Form Inputs - Hidden? Hidsb
0
Action button needed to trigger Drop-down list selection?
0
Using drop down select lists as a filter long list of items. What are the best practices for this? Should I be using a drop down list at all?
1
How to highlight that drop down filter has non-default option selected
3
Two different ways to narrow a large list from a select drop-down