I'm looking for practical applications or studies where the application has been developed for users with different cognitive styles.

So far I have two:

The almost six year old study performed by Ying Dong and Kun-Pyo Lee at the Industrial Design Department, KAIST, Daejeon, Korea named A Cross-Cultural Comparative Study of Users' Perceptions of a Webpage: With a Focus on the Cognitive Styles of Chinese, Koreans and Americans compares different cognitive styles based on Nisbetts' research. The study object is a web based prototype inspired by the Yahoo! website.

In this study from 2008 the study objects were

... Chinese, Koreans (both holistic thinkers), and Americans (analytic thinkers) were recruited for the experiment. Findings from the analysis suggest that the Chinese, Korean, and American participants employed different viewing patterns when viewing a webpage. The Chinese and Korean subjects showed more similarities to holistic thought patterns, while the American subjects showed more similarities to analytic thought patterns.

They also present a very interesting chart explaining these differences: 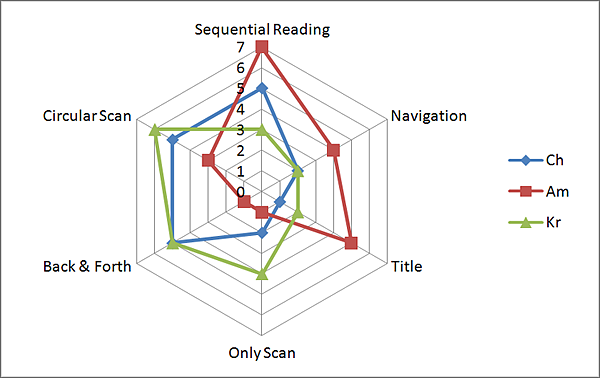 No real suprise there. There are differences, and if possible one should have these differences in mind when designing for different cognitive styles.

In order to cater to holistically-minded people's way of browsing a webpage, which involves obtaining an overall big picture by scanning the entire page, content design should show the whole context of the website.

When designing a webpage for holistically-minded people, the harmony between the foreground and background as well as the relationship among all of the content areas should be taken into account. This guideline is derived directly from Nisbett's theory, while it has not been proved by this study.

The webpage design should be as clear and simple as possible. Major categories and highlighted contents on the webpage may cater to usage by analytically-minded people. The webpage layout should be clear enough to be read by users who focus on each information group.

Since analytically-minded people tend to employ a sequential reading pattern among areas and to read from the center to the periphery of the page, the arrangement of all content areas must be considered carefully.

Category title and navigation items should be named as clearly as possible since analytically-minded people tend to pay more attention to these items and to gain an overall picture of the website from them.

When designing webpages for analytically-minded people, efforts must be directed toward designing each content area. Independent content areas should be emphasized. This is directly from Nisbett's theory, while it has not been proved by this study.