Ask Question
Asked 7 years ago
Active 4 years, 10 months ago
Viewed 7k times
7
Closed. This question is opinion-based. It is not currently accepting answers.

A few stipulations for an unambiguous font:
- It must be easily legible.
- It must have a slashed zero (so as to distinguish it from capital O). - It must sufficiently differentiate between the characters 1, l, |, and I.

Why? Because when people are writing code, or checking data and documents, they need to be able to distinguish easily between these characters.

Monospaced fonts can provide what you're looking for, a good example of which is Consolas.

Consolas has been described (here) as "...a sans-serif font with the same rounded appeal [as Lucida Console], but nevertheless retains the traditional "code" feel, with monospaced characters and a "boxy" look."

It holds all the characteristics of a programming font; namely being sans-serif, fixed-width, slashed zero, and sufficient differentiation between the characters 1, l, |, and I. 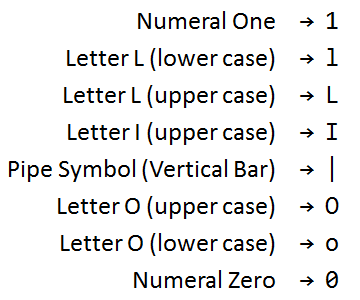 Consolas is clear, concise, and (for the same font-size) takes up less room than Courier New.

Its only short-coming, however, is that it was built specifically for ClearType, and is a commercial font. It ships with all major new Microsoft releases though, and is therefore most suited for programming on newer Windows machines (you can get it for Mac if you install Microsoft Office). As an alternative to Consolas on Mac or Linux, you could try Monaco, Ubuntu Mono, DejaVu Sans Mono or Anonymous Pro.

If you'd like more options, check these articles:
Hivelogic - Top 10 Programming Fonts
Slant - What are the best programming fonts

UPDATE:
Here's a graphical comparison of Consolas against the other fonts mentioned in this answer: 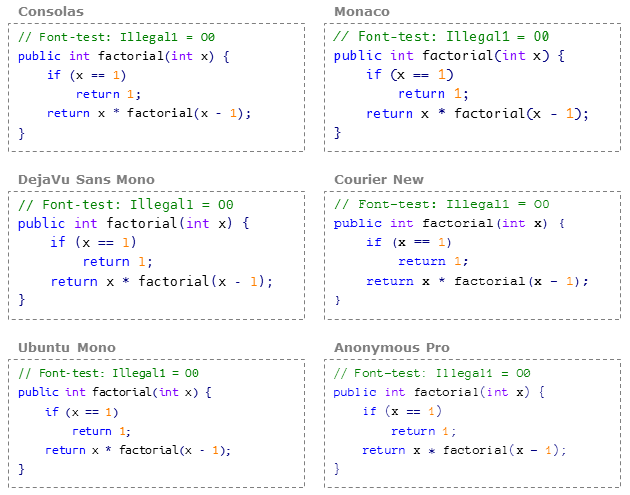 For a full list of the comparison, see Samples of monospaced typefaces and some more here - 42 of the Best Monospaced Programming Fonts, courtesy of comment from @Basil Bourque.

For me I like courier new in Sublime; but that doesn't answer your question. It also doesn't help that the default Windows font viewer uses the string 1-9 to display.

SNag's answer has everything down to a tee - especially when it comes to i, l and 1.

For a list of zero slash fonts look here

Not the answer you're looking for? Browse other questions tagged website-design html css font or ask your own question.

12
Table usability/Readable font for a data table
16
Font sizes for WCAG2.0 AAA
19
Accessibility and the use of font characters for icons
5
Convention for serif font
15
What is a sans-serif font that still clearly differentiates similar characters like: l 1, i etc
2
Dealing with characters not supported by a font