Is there a "best place" to put ads in an app to avoid user irritation or will users look over them anyway?

I'm embarking on a new project and one of the stipulations from the client is that the Android app I am designing MUST have banner ads in it but they are also to be put where they will "cause the least amount of irritation". The revenue made from these ads is based on impression rather than clicks so it makes sense to put them where they are least likely to get in the way This made me wonder, is there somewhere to place ads that will annoy users less than if they are placed elsewhere or do users just ignore ads anyway?

I know that this shares some points with web based advert placement but as with all things mobile it has it's own unique problems.

Most apps seem to put their ads at the bottom of the screen, however a fair few put them at the top now too. I know from personal experience that I tend to look over ads and don't really notice them so if I place the ads in these usual places will it cause less irritation to the user? Have users seen so many ads that their eyes automatically skip over them in a sort of mental ad block?

Unfortunately, it only highlights the don't do's rather than the do's:

When deciding where to place ads within your application, you should carefully consider user-experience. For example, you don’t want to fill the screen with multiple ads that will quite likely annoy your users. In fact, this practice is banned by some ad networks. Also, avoid placing ads too closely to UI controls to avoid inadvertent clicks. 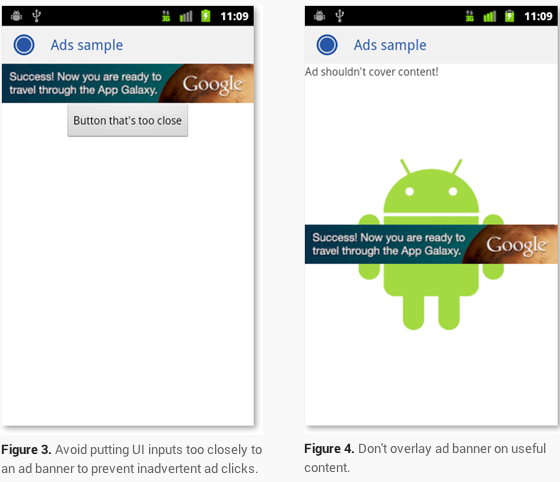 Not the most helpful, but I think it's because you're already going down a limited path when you start implementing ads. That said, I would stick to common patterns. Deciding between top and bottom placement should depend on your layout (i.e. away from controls).

In response to some of the other discussion about ads in general, a user experience will be diminished by ads, but less so by targeted ads as a result of a value-for-value tradeoff (i.e. free product that has ads).

I'm taking a bit from another thread, but if the rest of you are more interested in this, check it out.

Appending to my prior answer.

I found this use of banner ads to be a good example for a couple reasons:

Regarding placement on the screen, the points in glilley's answer and in the Android developer docs are vital. (Don't overlay above elements, don't place ads next to other controls/buttons.)

Many of these following tips are from my personal experience and in my opinion should be common sense:

Are there screens or a time in your app when the user is waiting for something? You could try showing the ad at that point (with the ability to dismiss it). It's a bit better than constantly showing a barely discernible ad pasted to the top or bottom of a smartphone screen.

Another problem with ads pasted to the top/bottom portion of the app: the user may accidently click the ad as they scroll/up down through the app. I've used an app that did this, and as I scrolled with my thumb, I accidently clicked the ad pasted to the bottom of the window. This really, really annoyed me. It completely takes me out of the app's experience that the designer(s) tried so hard to create.

(Found this on Google search while looking for something else and thought I'd add my two cents.)

It depends on the user, but, in my case, the moment I see a banner advertisement in an app, it gets turned off and uninstalled. The same goes for uninvited video ads or any game that requires ad-watching to advance through normal gameplay. So, my answer to this is that there is NO placement of banner ads that is acceptable. Period. It makes an app look cheap and poorly made and is INTENSELY off-putting to users, no matter where you put it. Why? Well, in my case, I'm not good at hitting my target on the screen (my hands shake), so I accidentally hit the ads and that annoys the living daylights out of me. Thus, any app with banner ads gets banished from my phone, regardless of what the app is or how useful it might be or how much I might like the game or ANY other factor. My annoyance with banner ads is such that no program that uses them remains on my phone. Full stop.

That said, I do watch voluntary video ads when they offer a significant and useful in-game reward, if that's any help to you.

Personally I feel the opposite to what you say about adverts fixed at the top and bottom, I do notice these and find them extremely annoying. It also draws my attention to the fact that this app is trying to force ads down my throat rather than provide good content which I downloaded the app for.

As to where I think they should go I think it depends on what kind of app you are making.

If the main screen was a kind of 'feed' such as the facebook news feed or instagram I would suggest occasionally putting in a highlighted 'sponsored post' containing the advert. This would be less obtrusive and the fact that it isn't a constant may make the user pay more attention.

If it were a game maybe at the end of each run you could show an advert, possibly offering an in-game reward on click-through (although I know that isn't one of your requirements).

I'd strongly advise against ads fixed on portions of the screen as in my experience they are irritating, ignored and devalue the app itself.

Depends on the actual app. Usually placing them as far as possible from the main controls or actions is an obvious best practice. Accidental clicks that send you outside your goal task is very irritating. If the app has many loading pages, it might be a good idea to show the pre-loaded adds while the content/stage is loading, since they are waiting anyway.

How contextual are you ads?

If it is not related to your content, then don't use them anyways since becomes annoying after a point.

If your ads are contextual, then you can use them while you are downloading something or transitioning between the screens

For example, if a user has just placed an order via your application and is waiting for the order to be confirmed/acknowledged, then you can show him ads related to other offers regarding the content they are ordering or other applications who does the same. You should give a skip button (or no thanks button) so that user can remove it if he/she wants

Realize the limitations of your app

If your app doesn't do something by design or by limitation, you can use this opportunity to show the ad which tells about a service which can provide that feature. It will give the user something complementary to your app.

Hope this has given a few ideas!

It doesn't matter, as long as you don't interfere with the users work flow.

From an other (marketeer) perspective: As soon as you or any one else has a concept of displaying ads in a totally unique way (actually increasing click rates) you will have copycats using the same method.

The nice thing then is: Users respond to novelty. So after time the users don't care where or how adds are presented. They learn extremely fast how to visually block or jump content which is not relevant to them.

So check competing apps and apps addressing your target group. How do they implement adds and do it the same way.

The only thing you can do wrong is to destroy their basic work flow with your app. Making adds look like a score board inside an NHL app for example will not provide the user with intended material (for which he actually downloaded the app) which will only raise his frustration level and decrease his commitment to your app.

Some source: "The law of shitty clickthroughs"

Not the answer you're looking for? Browse other questions tagged mobile android placement advertisement or ask your own question.

53
Why don't users want to see adverts relating to products/services they might be interested in?
3
Where should ads be in iOS App?
2
Is showing an ad after a home button press too annoying?

5
When forms should be intrusive
2
Where to place advertisement with the least irritation to the user
53
Why don't users want to see adverts relating to products/services they might be interested in?
6
Is it bad to post an app update to only show ads?
1
Google Chrome extensions and revenue without ads
3
Meeting both user and advertiser needs
0
Why are pop up ads still present?
3
Apologizing for Ads
1
Where is the best place to put my AdMob banner that will minimize misclicks?
4
How do I prevent recommendations from being perceived as ads?