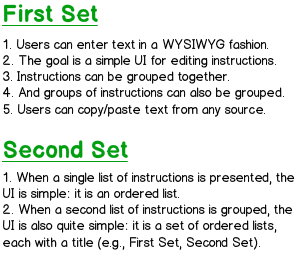 The above image shows the current state of the system: users can edit instructions, but with a single level of grouping. The grouping is flat, not nested, as shown in the following screen capture: 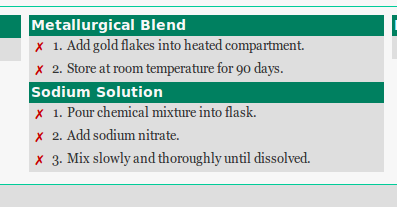 Not much screen real estate exists for additional widgetry, in the current design.

The first idea I had relied on using the Tab and Shift+Tab keystrokes to allow the user to indent to another level.

I thought of using finger tabs, such as: 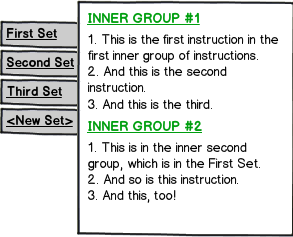 The next idea I had was: 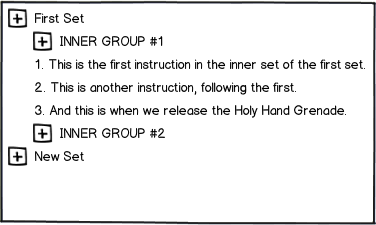 Another idea is to provide a classic tab-based interface: 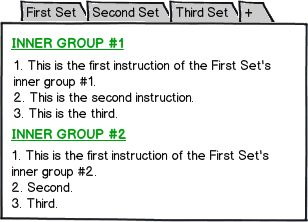 How would you allow users to edit doubly-nested and entitled instruction lists inline (using contenteditable, or similar)? (Bonus points for arbitrarily-deep nested titles.)

Editable elements are simple and has pre-defined formatting. Trying to implement complex rules you will probably end up with advanced inline editor.

The better way is to to use multiline editor with very simple syntax rules and immediate preview mode. The same we have here, at UX SE. 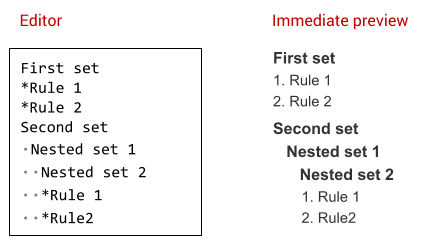 The rules could be as follows:

Arbitrarily-nested titles are possible, too.

Not the answer you're looking for? Browse other questions tagged usability gui-design inline-edit grouped-list user-generated-content or ask your own question.

14
Where should form instructions or hints be placed?
4
User access level grid - idea for gui
1
How to reduce complexity of nested form interface?
0
How best to create a link/relationship between multiple elements of a webpage?
2
Improve design for master-detail interface
8
Nested edit states. What to do when edits are save-able at local and global level?
2
Platform selection mechanism on documentation website
3
Grouping or visually linking multiple rows in tabular data - best practices
2
When to remove labels for data elements?