I have a complicated system resulting in three tasks with a high degree of interoperability. How can I design an interface for this?

Okay, I am not going to go into too much detail about what the system is actually for as I don't think this is entirely relevant. Basically this is a product database with entities called 'groups' used to group together similar products. I am designing a system where users define 'group rules' to run various tests against the groups, e.g. to find products that don't belong in them, etc.

They will need at least three discrete screens:

But I am having great difficuly designing these screens and keeping this functionality split up this way.

For example, say I am designing the screen to edit/ create rules. The natural thing that a user will want to do when they have created a new rule is to assign it to a number of groups and run it. So I add functionality to let them do this and, before I know it, I have ALL the functionality on the first screen. Each attempt I have made so far to design an interface has ended up with three screens that are practically identical.

I tried to implement an 'anchor system' where the user is anchored to one of those three tasks but pulls the context (i.e. whichever rule they have open) with them from screen to screen. This looked horrid and wasn't intuitive to use.

I thought about having a single interface but there is literally far too much to squeeze on.

I have considered having pop-up 'helpers' for some of the functionality, so you are in the Rule Designer and you want to run the rule you are working on, you click a button and a new screen pops up where you can do this and then go back to the rule you were working on. The problem here is that the user runs the rule and then wants to export the results to Excel, or modify the group assignment then come back and run the rule again, etc.

There seems to be a fundamental issue here about where the user starts. I only have space assigned to me for a single launch button so I can't have a button for each task. I did consider having a 'launch screen', i.e. a 'what do you want to do today?' screen but this seems clunky.

I thought about having the launch button take the user to a screen where they search for the group rule they want to work on but even this isn't simple. Finding rules in itself is complicated as there are many possible ways to filter the results (e.g. only find rules that have been applied to particular groups, only find rules containing some free-text in their name/ description, only find rules that have a rule about 'glass bottles', etc.). Assuming I can get the rule searching sorted I would then let the user pick what they wanted to do with it (edit it, run it, assign it to groups, etc.) with each option launching a new screen.

But the user might not even care about rules, there are many different requirements here and they seem to all be conflicting. I am going to end by listing some 'typical' routes through the process to try and give some flavour:

Any clever ideas on how to design an interface like this?

Sorry this is so vague, I can add more detail as required...

To get inspiration on how to implement a rules system functionality (I guess that's what you're trying to do), turn your browser to Visual Rules Modeler: 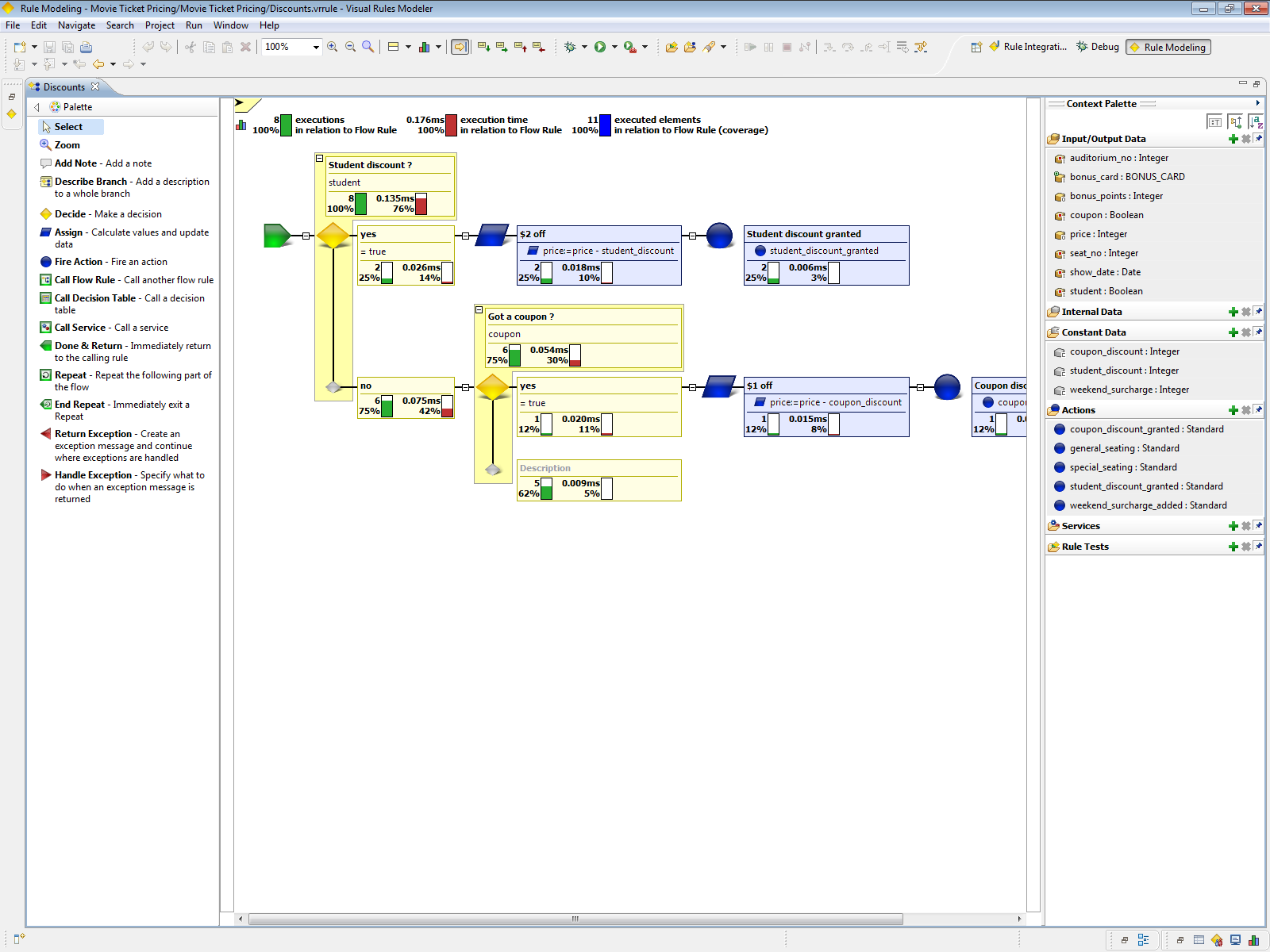 The user experience on the software have a lot of improvement potential, but the functionality is very similar to what you're trying to accomplish.

2
How can I make this complex photo upload system easy to use?
15
How can we visually improve the nested rule/predicate builder?
1
How to implement a delay to prevent inadvertent clicks on a touch screen
0
Overridable validations - displaying and handling overrides
7
Best way to display many yes/no options (checkboxes) and comments
13
Should labels in forms follow the same grammar rules as titles
0
How to handle form validations when the Cancel button can lead into an incorrect state?
1
How to organise a multi-select list that allows for selection of both users and groups, where users can have multiple groups?
1
How to make nested input groups more iniutive