What is the most minimal sign up process possible?

I want to let my users get to using the website as fast as possible, so I want to have as minimal a sign up as possible, using progressive profiling to get information later if they want to disclose it.

Basically my two goals are:

This is what I have come up with so far: 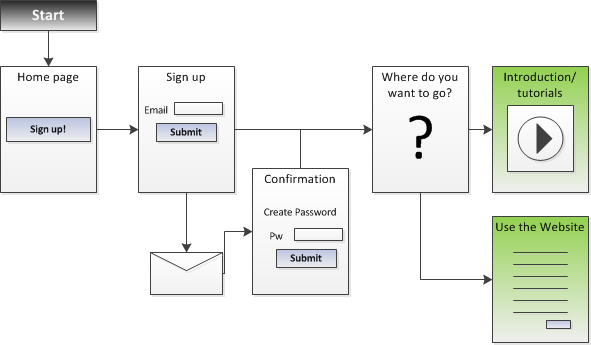 It seems to me this is the simplest signup that gets you started using the website with the least amount of effort from the users.

Can this be simplified? Are there other tried and true minimal sign-up models?

I want as low a hurdle as possible for getting users signed up and using the site. I can get information about them later (first name, etc.)

Stripe.com (a payments processor) offers an even more "immediate" sign-up process - they allow you to skip it all together. Any guest can begin using their dashboard and begin customising settings, testing mock transactions and making customer profiles before entering any sign-up information. No username, password or email. It's only when you want to go live and actually use the system to accept real payments do you need to create your account.

Several other sites I have used before utilise similar flows: allow guest users access to as much of the platform as possible, even saving settings between sessions with cookies, before requiring any personal information. More work for the developer, but a much faster and "invisible" process for potential users.

I agree with Rumi P. that your first goal isn't really to merely get the visitor signed up, but to get them coming back and actually using your site - of which signup is an important step, but not goal. A basic flow might go: 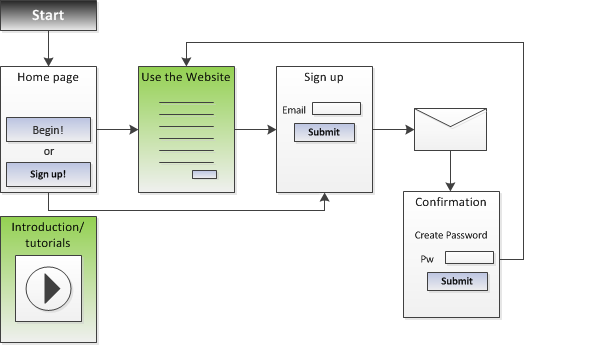 (I removed introduction/tutorials from your flow because you can really insert them anywhere - any complicated/sensitive/sensational features can have contextual help links right in with content, etc.)

I've drawn the diagram which could give you some insights. 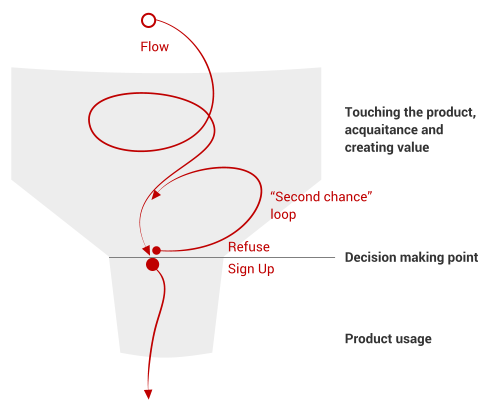 So your task is to design flow, that leads user to a decision point. Some acquired value and good experience before asking to Sign Up could create relation to a product or service and loss aversion effect. Still, if it isn't gained yet, user has a second chance.

The moment of decision making can be tied to some event:

I agree with BrianN's answer: skip the registration-first step. Here is an extended explanation of why this works best, which I feel complements his answer.

You defined one of your goals as "get them signed up". But as a normal, white-hat business, this is not really your goal. Your goal is to get them to become regular users, whatever the definition of "regular" is in your field. An account which is not in use does not give you an advantage. The exceptions: 1) if you are building a collection of valid e-mail addresses and related you plan to use for marketing purposes, which can be anywhere from unsavory to illegal, and 2) if you are trying to impress investors and press with "we have a million users" slides. But any investor worth his salt will ask you for the percentage of active users and paying users among them. So, I will assume you don't care for either of the exceptions and state that, in the typical freemium model, the root of your goal tree is:

How does a non-user convert to an active user? Let's separate the users in three groups: decided-against using your solution, decided-for it, and undecided. You can't do anything about the first two, you are trying to convert the undecided visitors to your site to decided-for. From the user's point of view, the process looks like this:

In a try-first solution, this process is supported in its details. Sign-up happens at Step 5.

In a sign-up-first solution, the site does not fit the process so well. But users will act as users always do: they will bend the software to fit their process, not the other way round. So, they will still follow the process above. Sign up now occurs at step 2. And the decision for or against your software occurs at step 4. All the newly decided-against users end up with an account for your service/product. This does not make them decided-for users, and they will not return to your site later.

Can you tweak something about the sign up to make a decision-for more likely? No, you can't. If you make the sign up very low effort in the terms described above, it doesn't create any commitment in the user. If you raise the effort required, you increase his commitment, but you also increase the proportion of users who will terminate on Step 2. And while I have no numbers for that, the industry trends of decreasing trying-out barriers (which probably prompted you to create the question) seem to confirm that the increase of terminating customers is disproportionally high.

And does the try-out-first method hurt your relationship with the users who were decided-for before they came to the site? No, it doesn't. They actively want to sign up; the only way a try can stop them from doing that is if they find out that they were mistaken and your solution is not good for them. Those people would have become inactive after signing up anyway.

Bottom line: You can't force users to do something they don't want to do. If they don't want to be your active users/customers, they won't be, no matter if they signed up or not. So keep the sign up for those who have decided to stay with you, and let the others try first.

With OAuth (facebook, twitter, Gmail intergration) you can grab the user's email address from whatever service you used to sign them up from and allow them to change it of they want and then they press save.

That way, if the OAuth service provider decides to charge or discontinues the service you still have an email address that the user account is linked to and can be authorized with. 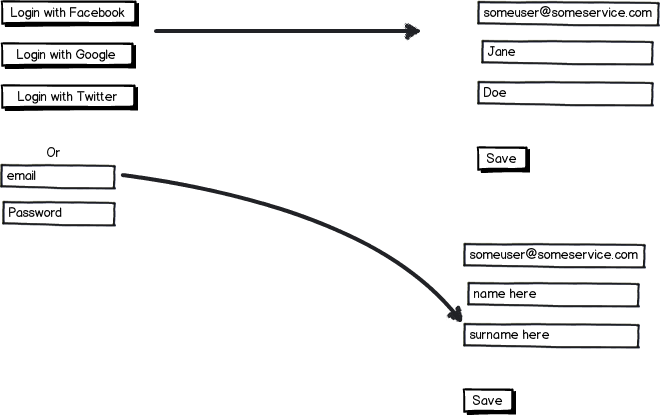 3 steps could be simplified here.

1- Have the e-mail form on the homepage itself. It would be unobtrusive, but saves the extra click and step

2- Consider skipping the need for e-mail confirmation before you can use the app. Confirm it after they've started using it instead. You could still ask them to set a password at the confirmation stage "To be able to log back in to you account later".

3- Always land them on 'using the website' but give them an option in that UI to find tutorials if they need to.

This would have a nice benefit of the create password step being a rudimentary "activation" metric for tracking whether people are interested enough in the site to keep using it after their first try. Useful!

Forgive me for answering with questions.

How does it email you before it knows your email address? And why would a user want to "sign up" when they don't know anything about your site yet?

Why does this have to be a separate form?

3. A new page asks you if you want to go to tutorials, or get started right away

Why does it need to ask you this? Can't it just start with the first tutorial, and offer a skip link (or vice versa - start with whatever the site does, and offer a tutorial link).

4. You either watch tutorials or you get started using the website

Who wants to watch a tutorial when they don't know if they need it yet? Let people start using the site, and if they run into trouble, give them help. Also, if people need a tutorial to use your site, you have bigger UX problems than your signup process.

I can't think of anything wrong with this.

Best solution is clearly no signup before the need to save.

But if a signup is required, SQRL is a promising new idea that would fit your criteria perfectly. Only, it has no implementations or even a locked-in specification yet, so it's futureware. So far.

Have you considered using Facebook/Twitter profile integration? This is by far the quickest way to sign up to a website/app that I've seen.

Simplify. Make it possible for the user to see the tutorials and explore the website. When they start to feel like a regular user, give them a reason to sign up.

You can gather information about the user during this exploration of the website. You should see the sign-up process as a casual conversation that is in fact an interview. This could replace the sign-up information fields with just a sign-up button.

Example, during the tutorial: "Welcome, to whom do we have the pleasure of speaking to? Fill in firstname."

Not the answer you're looking for? Browse other questions tagged registration conversion-rate simple easy minimalist or ask your own question.

2
Would requesting email confirmation prior to collecting any other details during the sign up process drive people away?

36
Activation email message optimization
6
Designing the sign-up process?
4
Best way for sign up process after invite
1
Reverse and optimize the sign up process for double opt-in
3
Sign up for a company network with LinkedIn using a deleted account
0
What is the best approach for dealing with new users once they have provided their initial sign up info?
2
Approaches on having a sign in, sign up, and guest form in mobile app with as little annoyance as possible
0
How and when to ask user for registration payment?
5
Allow users to create an account without email
0
What registration process can one employ to prevent users from creating more than one account?