A friend asked me to make a loyalty card app for their store, so that the customer gets something for free for every n-th purchase.

What is the best way to do this that can not be faked by the customer?

The point is that it must be very easy (ie. a good user experience) for the customers to do this.

Suggestions that add something fun to the experience would be interesting too, like taking a photograph of the clerk and a wall calendar in the background, just to pull a wild idea.

There's no need to over-engineer a loyalty system - there is a really cheap and simple app for loyalty bonuses at every n-th purchase: 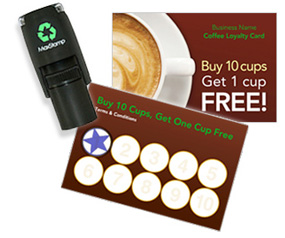 A simple web search for 'Loyalty Stamps' will give you a wide choice of stamps to choose from. The main benefit of keeping is simple is that you avoid ALL of the downsides of trying to use technology (development costs, bugs, exclusion of customers without smartphones, to name but a few).

A QR code or an EAN bar code or something similar is fine, but in order to provide validation so it can't be faked, you need some server-side processing which links the user to his purchase.

The rest of this answer is out of scope in terms of UX, but here goes anyway...

When the customer claims his free gift, use the server-side records to validate that he's entitled to it.

The crucial part for security is that nothing is left in the control of the user. Everything is on the store's servers. The only part which the user has any control over is whether he scans the code on the right phone, or at all.

A standard store loyalty-card scheme which is handled by the checkout clerk does the same thing: the customer hands over his card and the record of his purchases is held by the store along with his card number. All that is in the control of the customer is whether he hands his card over for his purchases to be recorded against it.

Whatever you do, don't go for the second solution.

Scanning a QR code off a phone display is hard. Different types of display have different resolution, brightness, reflectivity, polarization, etc. Using a web camera to recognize the image from a backlit phone display is a very different beast from recognizing the same image printed on paper or other non-emitting surface. If you try to implement it, you will have to invest lots of time for it to work well. I wouldn't even recommend it for large projects due to its brittleness and error proneness; implementing it in a quick solution is just impossible.

You might want to look into technologies beyond QR. NFC could be an option, but doesn't have much penetration yet.

Not the answer you're looking for? Browse other questions tagged mobile iphone qr-codes or ask your own question.

16
When should a mobile app have only one orientation?
3
Navigation bar necessary for mobile app with no hiearchy?
28
Are QR Codes good UX?
3
When should you use popovers in an iPhone app?
6
Should I build camera functionality into a photo sharing app or let the user use the device camera app they would already be familiar with?
5
Integrate a QR code scanner in my Android app or call one via Intents?
18
Is there any evidence to back up the theory elderly people won't know how to use a smartphone?
1
Landscape vs. Portrait on devices with disabled auto-rotation
6
Limited capabilities in mobile apps: why such choices?
6
UX when showing multiple QR codes, but making sure people don't accidental scan the wrong one