How to display month name in a small form?

I have to display a form with 12 months and for each month a number input and a toggle button. This form is in a pop-up so I don't have a lot of place. I did two columns with six month per columns. This a screenshot of the columns.

Do you think this positioning is intuitive for the user ? Should I display the month in another order (January, February, March, etc. in the first column, and July, August, September, etc. in the second) ?

Compare reading patterns. They are based on Gestalt principle of proximity. It's better to slightly re-organize months, i.e. your second choice. 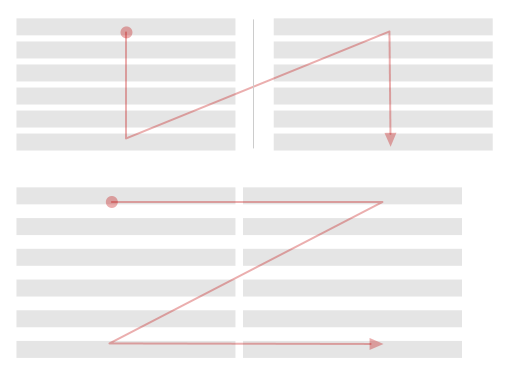 You're not saying what the use case is for this. Can you elaborate? Why would one need to specify values for all 12 months at the same time, and why would some need to be "estimated" and some "requested" instead?

If you don't need all at the same time, have you thought about just making it one entry with a popup for the month name? Or if you need more than one but not usually all 12 months, building a list like

? I.e. have only one (or a few, whatever a typical number of months that people will request at a time) field, and "+" and "-" buttons to add/remove fields ? The month name would then be a popup, allowing selection of all months that aren't yet present in the list.

Alternately, you could display it as a table, with the months listed horizontally, and below each name the edit field and switch button. (Also, how large will those numbers be? You can make the fields narrower, they only need to be large enough to hold the widest number).

Depending on what an estimate and a request is for, you could also remove that from the table and put it below the actual month list, allowing a user to select ranges of months using popups, like

Or even automatically assign these values (e.g. if estimates are needed only for months that haven't happened yet) and just display:

Or just have one UI element per month for estimating those months that can't be requested for some reason. Though one needs to be careful with this, as you don't want users to be unsure what the opposite of "estimate" will turn out to be.

But really, I don't know what your target audience or even use case is, so it's hard to make any substantial suggestions.

I found the gap between the 2 columns of months too large. After having read the 1st column my eyes didn't go to the second column... Why not something like that

Not the answer you're looking for? Browse other questions tagged website-design forms web-app multi-column or ask your own question.

4
How to select a small range from a calendar
6
How do I design this form to work most of the time, but allow the user to access additional functionality when needed?
22
On mobile web, what's the best way to present Date of Birth form fields?
3
Complex Forms and Data Consistency
1
Presentation of long form in iOS
0
Multiple choice control for region (6 regions) and countries (all countries in the world)
2
3 Column CRUD layout
5
Is it a "Natural language" form a good practice?
0
Search Form - Multiple Date Range Search
2
When designing a 2 column form, should the logical order of fields flow vertically or left to right