I have a question that is similar to another question but is different.

Consider a blog engine. Posts can be transitioned through state:

If a user was to visit the old draft URL /posts/draft/review/:id, when it has already been approved, which of the following should happen?

As I've mentioned in the comments, our real application is similar to that of distributed source control where your draft is essentially your fork of something.

In Cool URLs don't change, Tim Berners-Lee states what URLs should not include. The most pertinent is:

Status- directories like "old" and "draft" and so on, not to mention "latest" and "cool" appear all over file systems. Documents change status - or there would be no point in producing drafts. The latest version of a document needs a persistent identifier whatever its status is. Keep the status out of the name.

The solution is mostly depend on context, i.e. is it useful to display to author his published post or return him to his admin area to manage other posts.

But you could try combined option, which is to redirect to published post and display notification on post's status change. It's non-obtrusive, clear and allows to switch to related tasks using links in notification area. 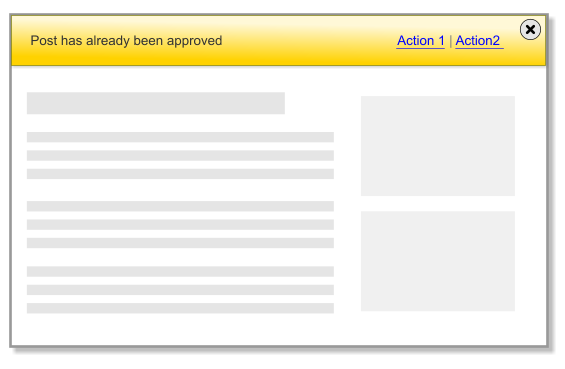 Not the answer you're looking for? Browse other questions tagged website-design urls redirect or ask your own question.

1
Tags and User Experience
0
Where to put the context sensitive menu
2
Proper Flow to redirect user to the App store?
0
Enhancing web addresses as displayed in a browser location input
6
Where to redirect after inviting someone?
0
Best way to redirect with a different url an user from an old version to a new version of a Website
0
How to display this piece of information on a web app?
0
Display information: Redirect to new page or show pop-up?
0
Redirect to checkout instead of cart
1
Should a redirect to external site have a delay?