Emerging UI trend: comments in the margin - pros and cons?

Context: Irrespective of threaded-vs-unthreaded comments, I've noticed that a few sites have started to experiment with comments in the margin (as compared to comments above or below content in a central container). I did a few searches around here and on Google, but didn't find any formal writing or analysis on how this might affect the commenting experience.

Question: Can anyone point me to such writing, or care to comment on the perceived pros/cons of this pattern?

Hypothesis: this comment-UI pattern improves comment quality, given that comments don't feel so divorced from content, so there's a lower likelihood for response threads (whether technically supported or not) to veer off into political/religious/fanboy/girl rants. 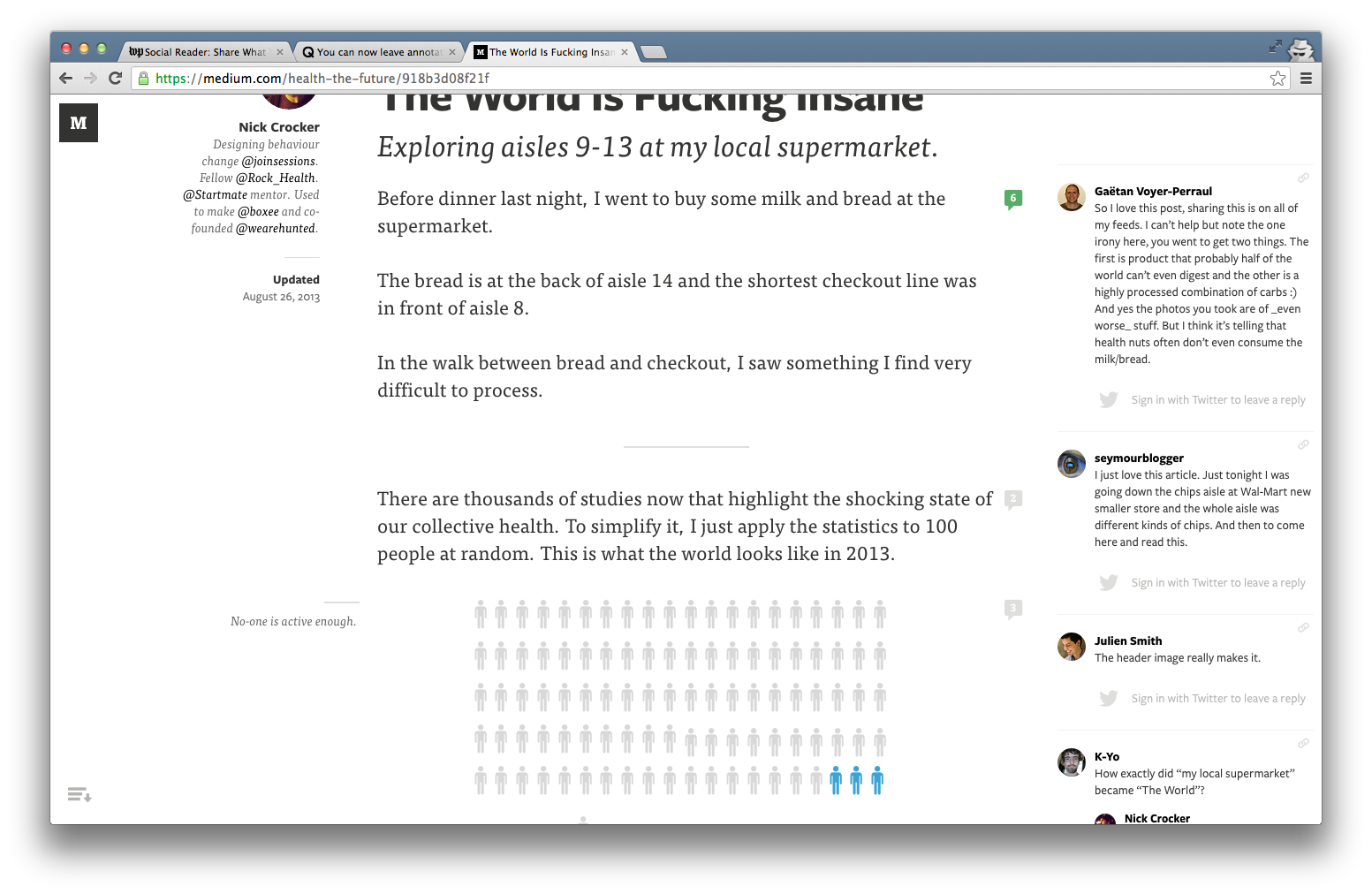 Quartz (qz.com) recently unveiled their first commenting feature since their launch (they're calling them 'annotations,' see their blog post about it here), which follows this same in-the-margin pattern. 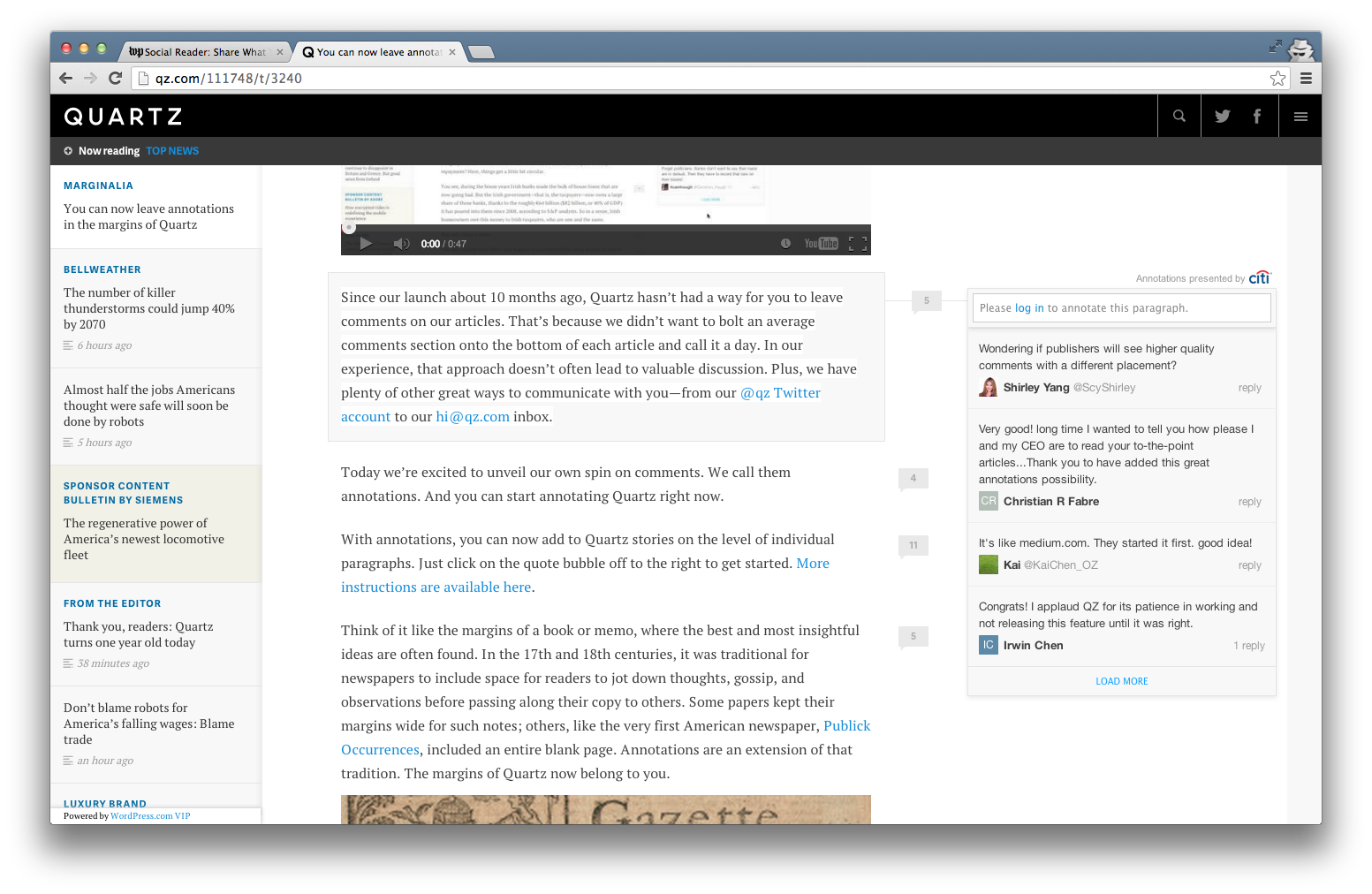 As of this writing, the feature is hidden on narrow-format screens (or at least, I couldn't find it on my phone), so I'm sure they're still experimenting/getting ready to launch that.

The Economist (economist.com, viewed on a mobile device), curiously, has introduced this feature on mobile but not on their wide-format (desktop) site. 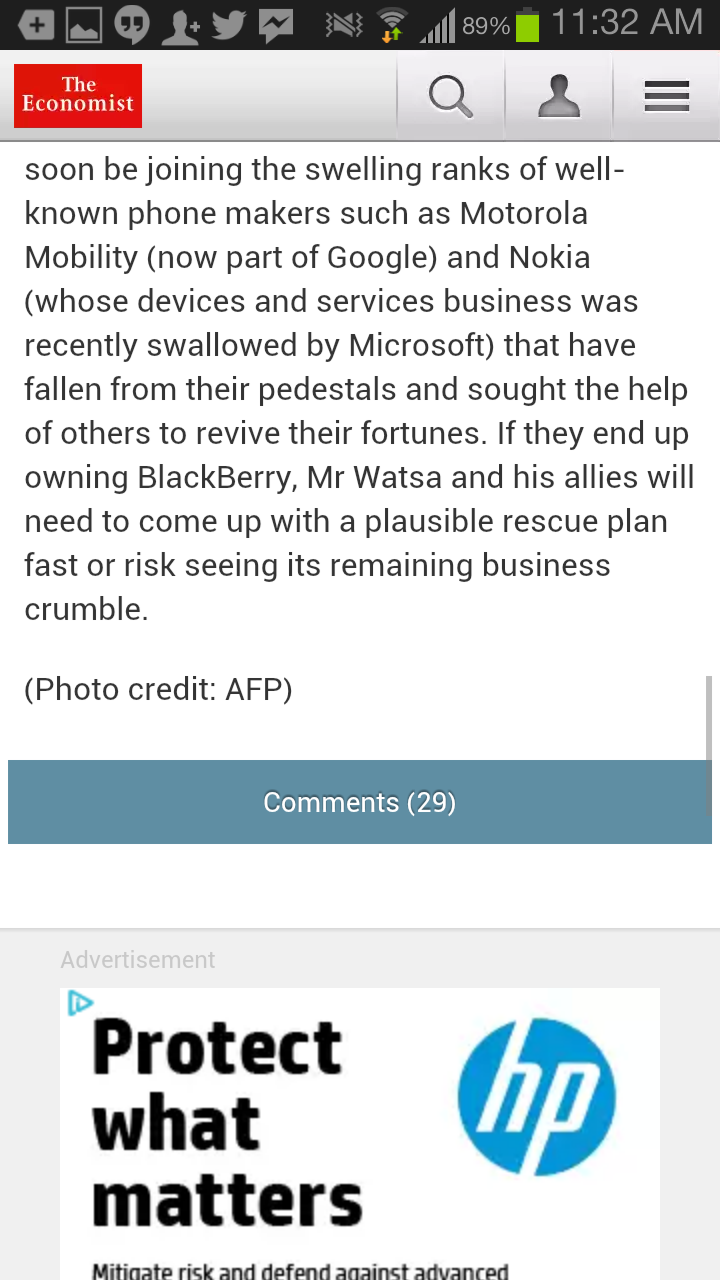 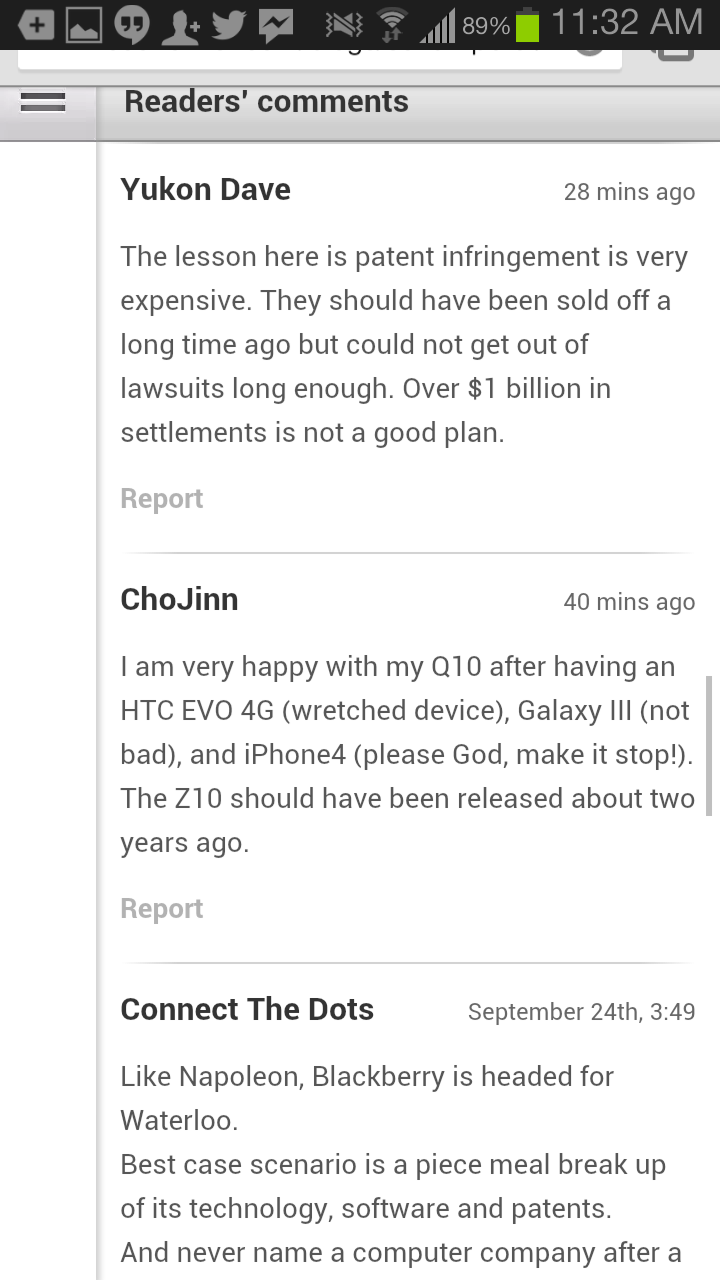 I was actually pleasantly surprised at the feature's smooth animation, given that that's tricky to do successfully on a mobile UI.

I think it depends very much on what do you try to achieve.

If your main focus is to make your readers consume a content you provide on a page I think you should not distract them with additional content which are comments shown aside.

If your main task is to try engage users into conversations and socialize them with each other, then I think it's a great idea. For the sake of the a flourishing community it is very useful.

Answering your question, I don't know any references to experiments or research. But you can always perform one with good old AB testing and Google Analytics or whatever you think appropriate. Maybe you'll be the one who will generate this knowledge ;)

I'm very interested in how these websites will solve the issue of multiple people commenting on the same section of a document, in a nested conversational manor. It sounds messy to me (not that it can't be done). It just seems like trying to cram a potentially infinite amount of content (continuous commenting) into a finite space (the margins of a text).

If the comments don't relate to the text they appear next to (like conventional margins notes) then I personally find them confusing as a concept.

I can't see them enhancing the legibility of the body text in any way, only the opposite.

I can't see how this improves the legibility of a conversation relating to the body text.

Alice starts to read the article. She ignores all the other columns. She thinks the article is really interesting. But when she comes to its end, she doesn’t read any comments … she doesn’t see any! The article column is longer than the comment column.

Counter-measure: Close every article with a link like "12 comments", which scrolls back to the top where the first comment begins.

Question: Why not add the comments instead of the reminder link there in the first place? Where is the benefit in displaying the comments next to the article?

I think it depends on the content type if there can be a benefit in displaying the comments in a sidebar next to the content:

For longer articles and/or extensive (threaded) discussions, I’d prefer comments beneath the content or on a separate page.

I strongly believe this depends on what type of website you have, who your audience is and as LoomyBear explains nicely, what you're trying to achieve.

Though I tend to agree with DA01, I think some websites such as reddit has a very strong commenting community where most of the interest revolves on the commenting itself. This goes same for any Q&A related websites. In these cases, I can understand the benefits of having comments within the same level as the content.

Maybe it was a case of the following line of reasoning: Narrower columns of text are easier to read than wide blobs of text so let's put the text of our articles into a narrower column. But what are we going to do with the blank space to the right of our articles? Advertising? Maybe. But let's experiment with putting the comments there and see what happens.

Not the answer you're looking for? Browse other questions tagged gui-design placement comments or ask your own question.

1
Comments at the heart of a document

23
Enter to submit comments on Facebook and StackExchange
17
What are the pros and cons of skeuomorphic design in payment transactions?
1
When to use inline comments and when to use per-page comments?
4
Should the comments/discussion slide-in from the side?
1
Comments at the heart of a document
0
Pros and Cons of a grid/dot grid based Futuristic UIs
1
show comments and likes
0
When to hide comments under the “show comments” button?
0
What are the pros and cons of referring to a user's "response" rather than a user's "comment"?