Of course, this is why HSV and HSL color systems are typically plotted as cones, with the point of the cone at the extreme ends of lightness having less variation in hue and saturation (or chroma as it is labeled in the below image). (Image taken from Wikipedia.) 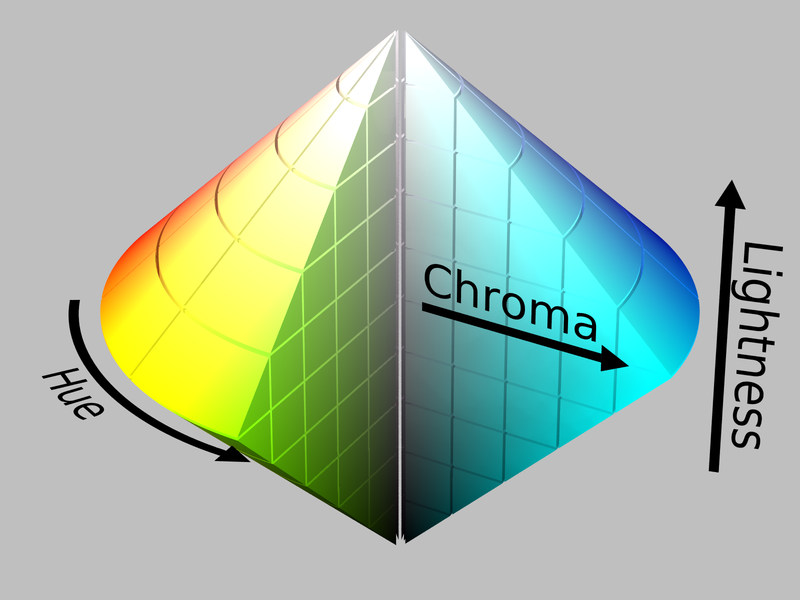 Perceptual models based on psychological experiments don't tend to be this symmetric though. And the Munsell color system is frequently presented as an irregular blob. E.g. there is no such thing as dark yellow.

What exactly is the lightness of a color? Here are two definitions that are quite different:

Merriam-Webster: "the attribute of object colors by which the object appears to reflect or transmit more or less of the incident light"

Wikipedia: "a property of a color that is defined in a way to reflect the subjective brightness perception of a color for humans along a lightness–darkness axis"

It's very different because the first definitions relates to light, the second implies the use of a reference lightness axix. Search more and you'll find more definitions. The takeway is that it all depends on what constitutes lightness for you. So basically, it is a matter of choice: which color model do choose to use?

In this regards, the model of the Natural Colour System is quite interesting. It is a perceptual model where the places of the colors in the system have been determined not my measurement, but by human research. The interesting part is that it has a rather special definition of lightness. In fact, it is called whiteness, rather than lightness.

The top half of this color circle is a lot brighter than the bottom. Yellow is located at the top, which generally reflect more light than the purple at the bottom. 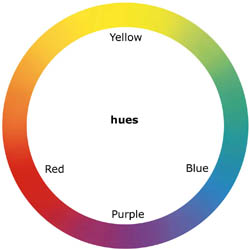 If the colors in the color circle get converted to corresponding greys, the difference in brightness becomes quite apparent. The top of the circle reflects 90% of the light while the bottom only reflects 22%. 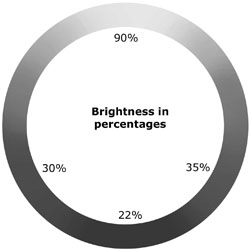 Now whiteness comes into play. The whiteness of a color is the amount of white that a color contains. Imagine, for instance, a pot of yellow, a pot of red and a pot of white paint. If you add the same amount of white paint to the red and yellow, both colors will still have a difference in brightness. BUT they will somehow be acquainted. They will both become a bit milky and a bit brighter but will retain a certain familiarity. The same goes for black. If you add the same amount of black to several colors of the same saturation, they will somehow belong together, notwithstanding their difference in brightness.

This ís an example of the effect of classifying colors according to whiteness. I picked the top row of colors so that they all have a similar saturation. You can see that their brightness varies wildly and will be hard to combine. The bottom row was picked with similar saturation AND similar whiteness. Even though when measured, you will find that they do not have the same brightness (do not reflect the same amount of light). As you can see, suddenly they seem to have something in common and won't be hard to combine into one design. As said, the same goes for black. Adding black will make the colors darker, but they will still retain their familiarity. Adding both black AND white will make the colors more grey, that is: less saturated.

Not the answer you're looking for? Browse other questions tagged color color-perception or ask your own question.

2
What is the relation of the category/type of a mobile app to its color?
14
How to best communicate color names to users more clearly
13
How to measure the contrast between any given color and white?
9
Why a color picker offers almost identical swatches?
4
Using hue/saturation to represent multiple dimensions
1
Color Palette Accessibility for White Text Button Labels
1
Adjusting for color difference between monitor and TV
32
What is the color associated with lukewarm?
2
Recommended color range for background color