Enter and Arrow Down to Navigate between Form Fields?

I showed someone a demo of my line of business (add customer, add invoice etc) type app last night, and they provided me some feedback. Their biggest point of concern was how to navigate to the next field/textbox. They tried enter and arrow down/up. Neither worked. I told her she had to press tab and shift-tab.

She'd never heard of tab. This came as a big surprise to me.

She was very strong in her criticism, insisting that enter or down arrow are the 'standard'. It's easy enough to code, but it will introduce some inconsistencies, like 'when keyboard focus is on a dropdownlist, the down arrow will change the selected item, rather than move to the next field'.

In your experience is enter and/or arrows a common way to navigate between fields? What, if anything, is the standard behavior?

I've got users requesting the same feature. Those users come from a background where they've worked a lot with spreadsheets.

Tab is the standard key to move focus from one field to the other.
Giving the same feature with Enter can be confusing, as the Enter button is used to trigger the default "submit" button on your form.

To convince my users that their request is not mainstream, I showed them a form on their target platform, and showed them that Enter / Down arrow does not change the focus, tab does.

Imagine you are a contractor who won a bid to install the lift in all branches of a new international bank. You fly across the world to meet with local representatives of your client. 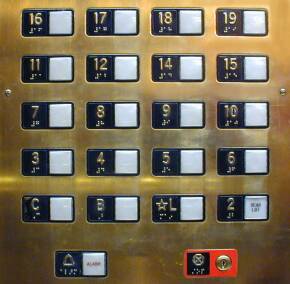 As you reach Tokyo where the client representatives have a rather odd request: They want the lift buttons not to have the number 13 - it's bad luck.

What would you do? Tell the client to man up and stop being superstitious, or do as they wish?

Imagine that you pick the latter - and install the lift with no 13. One day the lift breaks. Not working. Is that a problem?

In France, turns out that the head of operations is a Japanese, he has the same request. You go and ask other stakeholders and no one seem to mind, respecting their Japanese colleague beliefs.

What would you do?

In Sweden, another Japanese stakeholder requests the same thing, but it turns out that in Sweden floor 13 is always the dining hall - so the Swedes really dislike the idea since it can cause much confusion.

What would you do?

There's a few things to learn from this story:

I think we are disregarding something he said that was incredibly important.

She's the only person I've demo-ed it to. You may be right about the word-processor thing. She has a lot of experience in the industry I'm targeting, and has used 3 of the 'big 4' applications in it.

She is one of the stakeholders who'll be using this application, which means, most of the people (possibly) will be doing the same thing.

I suggest you test this with other people within your user base to understand fully what they want out of this application. Because honestly the "norm" is really tailored to what you're targeting.

I can believe down arrow but I've never heard of Enter + arrow key combo. Enter is usually tied to the submit button, and therefore I don't think you can even do a enter + down arrow combo to skip to the next field unless you disable the enter. Tab is definitely one of the standard ways to navigate between fields. My recommendation is to convince your client that enter doesn't work or maybe settle with arrow key as well as tab or to allow all keys mentioned to navigate between fields.

Not the answer you're looking for? Browse other questions tagged navigation input-fields or ask your own question.