Should Slide in/out navigation be restricted to tablet/mobile?

I am in the early phase of a project, brainstorming the overall design and it involves putting together a collection of different web based applications under the umbrella of one application "launcher". The user will be able to log in and launch one of the products to do their work and switch to and from any of the other products as needed.

One of the design options that is floating about is the use of a tray that slides in (from top or left) when activated to show icons for other products. Click an icon and the tray slides closed and the new product loads.

I have done a lot of looking around and it seems this is exclusively a mobile/tablet pattern. Has anyone done any testing with a slide in/out tray navigation pattern like this a desktop based application that says it is or isn't a good idea?

A general user interface rule is, if no one else is doing it, you shouldn't do it either (unless it is a game-changing, beneficial innovation).

In this case, a launcher like you describe probably could work fine on the desktop in the abstract. But if no one else uses such an interface, it will probably confuse and/or annoy the users. Try to use a method that is paradigmatic for the platform.

Update: now that it has been revealed that this is actually a web application, the following comments probably aren't relevant:

Also, in general I would avoid a design that requires a master "launcher" program. A launcher program already exists on everyone's computer: it is called the operating system. You should not take over that function. Doing so adds an extra, unecessary layer for the users to navigate, bypasses helpful OS features like shortcuts, and adds no benefit to the user. You don't want your software to be a chore to start up and use. That is the first thing the user experiences.

In my experience, software that follows the launcher model is almost always clunky, bloated, and horrible to use.

Note that old versions of Microsoft Office had a launcher program turned on by default: the Office toolbar. It was horrible, and they eventually did away with it (about the same time they got rid of that stupid paperclip).

A webapp I am working on has a similar feature, though they are different modules within the same application. The way we handled this was with an area at the top of the screen that could be closed by the user. In our case some users would access this area quite often, where other users would only access it rarely.

Attlassian uses a hamburger menu (see screenshot), similar to that used on many mobile websites. This seems to work quite well for users that do not have to switch between the applications very often.

I realized I did not answer your question. Slide out navigation is used for sites and I think can be used quite effectively. While I have seen it in other places, here is a public site that uses a version of it: http://www.google.com/nexus/index.html

While I don't think this is a particularly effective example, I feel borrowing patterns from the mobile experience, where it makes sense for a larger environment, is perfectly acceptable.

I agree with Dan RE: launcher programs on the whole. However, if you're married to the idea, you can do a little looking about the navigation drawer.

Google+ has something rather similar to what you're suggesting (I think). 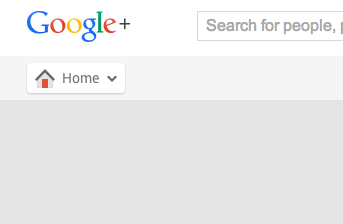 Not the answer you're looking for? Browse other questions tagged interaction-design navigation menu or ask your own question.

6
Using a TabBar with slide out side menu?
6
Thoughts on mobile 'matrix' style navigation?
1
Working out the site navigation
1
Designing UX for an In Vehicle Infotainment system
3
Slide-out navigation and landscape vs. portrait iPad
0
Using slide-out navigation for multi-level menus?
1
Navigation Drawer - Tablet - Push or Overlay?
2
Better position to place slide in/out icon for a horizontal slide menu in responsive theme?
1
Should the iOS slide out menu link to all features or should it avoid duplicates?
1
Left side navigation tablet/mobile app