Should the state of each change be beside the file name or should files be grouped by state?

Here is the mockup we've made similar to Mercurial (each state character would have the name displayed in a tooltip):

Is this "better" than just grouping each file by status? 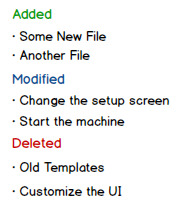 The users of our application are mostly non-technical. They most likely have never seen this type of "change state" interface before.

The advantages to using the abbreviations:

The disadvantage to the abbreviations:

Has anyone created a similar interface for non-technical users?

What a fantastic question! As a git user, I couldn't help smiling when I saw your grouping proposal, thinking: "How come no one has thought of this before? This is soooo much better".

You have done a great job arguing the options. I'd like to challenge this thought of yours:

I think if the mental model for the user is to work with individual files, then perhaps the first option is easier because they can get the exact information at one glance (i.e. it is in one row), whereas in the second option they have to find the group first and then find the file (because of the physical separation of the two bits of information). If the mental model is to work with entire groups, then it makes sense for the second option because once the group has been identified then they can just work with all the files in the group.

Unless there are a large number of states, it shouldn't be a problem for the user to adapt to either design. But rather than asking the UX professionals, it is better to ask the users what they think (or just observe how they perform the task) and be prepared to make changes rather then design and forget.

I think the real question you should be asking is what the default grouping should be. From what you've described here, I see no reason why grouping shouldn't something a user can change to suit their preferred style.

Something to consider is the experience of the users. As they become familiar with the application, they will be become more expert, and start to look for ways to optimize their work. This is where a changeable grouping can become quite handy. The "group by status" option gives a clear indication of what follows, and is easy to understand for the novice user, while the "inline status" option will read faster to the experienced user. Once a user is comfortable with the application, they can switch (or not) at their leisure. They should be able to save their settings, so that they don't have to click a button or whatever every time they use the application.

However, regarding the "inline status" option, I think a better way to represent the statuses would be symbolic, rather than alphabetical. A '+' and '-' are universal symbols for addition and subtraction, and do not require learning new symbol mapping. Using these provides a natural map to our world, and makes adoption smoother and simpler. You might use a '~' for modified records, but whatever you choose, you've eliminated the extra load on the user by exploiting cultural constraints. It may seem as though you've only eliminated 2/3 of it (+, -), and for a handful of users, that will be true. However, for the majority of users, they will initially associate the modified symbol with "not + or -" rather than the symbol chosen, thus eliminating the need to learn it. After some use, they will "learn" the symbol itself with use.

However you do the inline statuses, include a legend. It may seem obvious one way or another, but make that information available, just in case its needed.

So to summarize, default to grouping by status. Give a option that is clearly visible to change the grouping style and allow this setting to persist for individual users. Use symbolic representations (+, -, ~) for your inline statuses, rather than alphabetic, and include a legend describing them.

Not the answer you're looking for? Browse other questions tagged usability lists or ask your own question.

3
Is there a name for the type of grouped list used for iPhone contacts?
3
When I change the name of one page, should all child's of that page, have the url rewritten?
11
How can I make the purpose of a complex user interface element more obvious?
36
Are hover states necessary?
2
How should I update the UI after user role change
2
The Best Way to Visualize “Out of Sync” Data in a Table
0
Best interface to select image files from the system file tree
8
Direct users to use a physical button
1
How is the UX principle called that the user should know in what state the system is?
0
What is the name of the pattern where you set state data before async calls finish?