Currently we have a table of results which has both a vertical and horizontal scroll due to the number of columns and rows displayed.

A user has requested we add the horizontal scroll at the top of the table as well as the bottom. This is not usual practise but I don't know the reasons why this is not a common approach to scrolling tables on web apps.

Is there an issue with adding scrollbars to the top of tables?

It's not common to have a scroll both at the top and at the bottom of the table because it would be redundant (not filling a purpose) in a correctly implemented table component.

The table component should show the data it contains in an area inside of itself, meaning that certain parts of the table (the column header, bottom scroll bar, possible action bar etc..) should be static and always present no matter if the user scrolls in the table (hence horizontal scroll will never be off-screen). 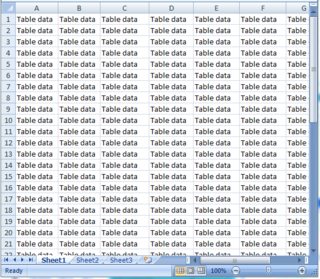 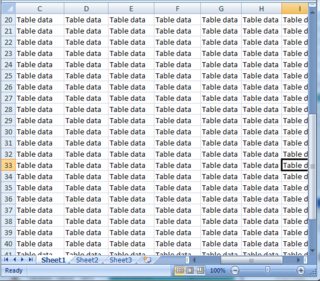 Look at the example from Excel, the horizontal scroll is always present in the bottom right corner, no need add an additional scroll at the top of the table. Table components in web applications etc should follow the same pattern.

I think you should consider whether it makes sense to display all columns in the table for start. Why not offer the user the possibility to hide / show the columns he wants to see? Making it flexible to the user, the table would only present the horizontal scroll if needed. I think this is a good example: http://consulenza-web.com/jquery/MediaTable/

By the way, I think makes more sense the horizontal scroll at the end of the table

Well you said it is large table. I don't know if height of table can fit on one screen but if it can't it is good idea to put h-scroll at the top of the table also.

When user tries to scroll horizontally to see values in columns of first few rows he has to scroll page up (maybe he has small screen), scroll horizontally for unknown step, and scroll page down to look at specific cell. Sometimes (for large number of columns) this process is repeated because user cannot distinguish what column is visible based on values in table cells.

User has few click & drag operations, instead h-scroll at top has only one.

It wouldn't make sense for smaller tables, tables that take less screen space, but with larger ones it does make sense.

Not the answer you're looking for? Browse other questions tagged tables scrolling data-tables scrollbars or ask your own question.

4
What options do I have for variable width data, but without horizontal scrolling?
2
Best way to display more table columns and rows than I have room for?
44
Responsive Design - How to deal with wide HTML Tables
2
Alternatives to pagination for dynamic tables with many entries
0
Suggestions for a page with a variable amount of large tables
2
Are horizontal scrollbars acceptable in an internal web app?
3
Floating horizontal scroll on a long page?
7
Best approach for huge data tables (currently using scrolls)
1
Combined Tables View
0
Is it common to have both horizontal and vertical scrolling for tables with fixed height?